Size matters for mosquitoes but medium-sized males do better

Last year, I blogged about an ironic public health strategy - controlling malaria with mosquitoes. The mozzies in question are genetically engineered to be resistant to the malaria parasite, Plasmodium. The idea is that these GM-mosquitoes would mate with wild ones and spread their resistance genes through the natural population.

The approach seems promising but it relies crucially on the ability of the resistant males to successfully compete for the attentions of females in wild populations. The 1960s and 1970s witnessed several failed attempts to control malaria by swamping natural populations with sterile males released en masse. And while these letdowns had been blamed on ignorance about mosquito mating, this area of research has gone untouched until now.

A new study, which I've reported on in New Scientist, shows that size does indeed matter for mosquitoes, but it's the average Joes that get the girls. Kija Ng'habi, a young Tanzanian MSc student, reared males of different size by controlling their diet as larvae, and pitted them against each other for the attentions of females in a cage.

He found that the average-sized males had twice as much sex as the smaller males. But amazingly, they also secured six times as many matings as the biggest ones, despite having smaller wingspans, lower energy reserves and shorter lifespans. In the long run, the longer lives of the big mozzies are unlikely to make up for their comparative failure to mate with females. 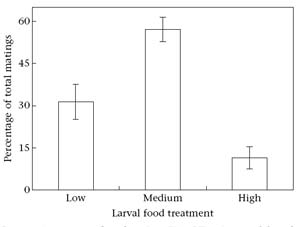 Heather Ferguson, the study's lead author, commended Ng'habi for his efforts. He carried out his research in "a very isolated part of Tanzania, in one of the most malarious places on the earth, with only intermittent access to electricity, internet, library materials, and all the other regular research tools and conveniences we take for granted in the UK."

There are two possible reasons for the medium-sized males' advantage, and the first concerns the way mosquitoes mate. Males attract the fairer sex by swarming, and they mate by darting out from the crowd and grabbing the approaching females. In this situation, medium-sized individuals might have the best combination of agility and stamina, outmanoeuvring the larger males and outlasting the smaller ones. Alternatively, females may prefer to mate with males that are the same size as them, perhaps because mating is more likely to be successful if males and females have similarly sized genitals.

Whichever explanation is correct, the study's results are still surprising and the implications for strategies involving GM-mosquitoes couldn't be clearer. Matt Thomas at Penn State University says, "Intuitively you'd have imagined that releasing the 'biggest and healthiest' males is what you'd want to do but based on the current study, that appears not to be the case."

Ng'habi's work suggests that the conditions in which males are reared could make the difference between success and failure, by affecting the size and competitiveness of the resulting adults. Thomas added, "Given Anopheles gambiae is the most significant malaria vector throughout large parts of Africa, it's amazing how little we still know about the basic biology of the insect. This may not be trendy science but the study emphasises the importance of understanding the ecology of a system. Even the new GM interventions under development can't get round that."