No, the "Ring of Fire" is Not a Real Thing 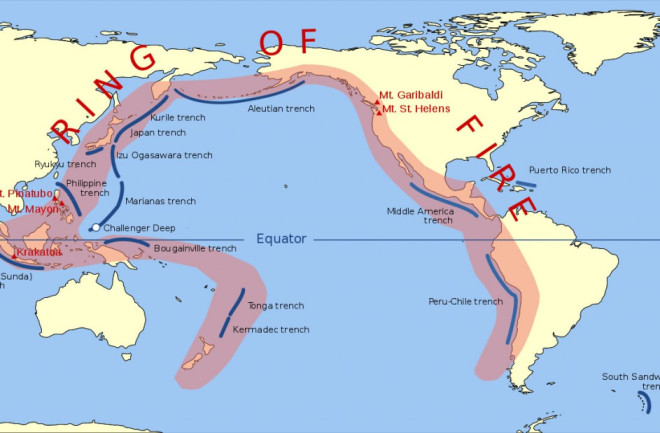 “The Ring of Fire is really active!” Yup, that’s what the headlines say. The supposed “Ring of Fire” — the chain of volcanoes and earthquakes that sits at the edge of the Pacific Ocean — appears to be in the news a lot right now because of the eruptions in the Philippines and Indonesia and earthquakes in Alaska and California. However, this is all normal for these parts of the world, so let’s not get all worked up about it.

Let’s start off with the basics: the “Ring of Fire” is not a thing, geologically-speaking. Maps of this supposed ring of doom show it skirting around the Pacific Ocean from southern Chile, up the coast of South America to the west coast of North America, up over Alaska and Kamchatka, swinging south to get Japan and the Philippines … then takes a weird jog to the west to include Indonesia because [reasons] and then finishing heading back east to hit the Kermadecs and finally New Zealand. The whole thing, though, is really just an evocative image for writers.

Sure, there are a lot of tectonic boundaries along the edge of the Pacific. It is a large ocean underlain by multiple oceanic plates that are interacting with lots of continental and other oceanic plates. However, what happens in Chile doesn’t really change what is happening in California, or Japan or New Zealand. Tectonics doesn’t really work that way, it’s too big a scale. So, that eruption at Mayon in the Philippines is not causing the eruption in Kusatsuin Japan or triggering earthquakes in Alaska. They are not directly connected (or even involve the same tectonic plates!)

What is true is there are a lot of volcanoes along the edge of the Pacific because of subduction, where oceanic plates dive under continental (or other oceanic) plates meeting their doom in the Earth’s mantle. That process generates magma, which forms volcanoes. In this case, lots of volcanoes. Lots of volcanoes, of which dozens are erupting or restless at any given moment … we just might not hear about them in the news because they’re in the middle of nowhere or the media is distracted by other things.

With subduction comes earthquakes too, so along the rim of the Pacific, literally hundreds of earthquakes happen each week. Dozens of these earthquakes can be big (larger than M5) and near populated areas like in Indonesia or Mexico. So, we should all expect earthquakes, not be surprised when a few happen close in time because of the clustering in a random distribution of events (and that’s what earthquakes are — randomly distributed).

So, what we are experiencing now in this flurry of news articles about the “Ring of Fire” being more active is not a geologic phenomenon, but rather a human one: One event attracts the attention, other events that might not have garnered much news coverage suddenly do because they are related in our minds and boom! the “Ring of Fire” is going crazy. Except it’s not. The tectonic processes going on are doing what they always do. Maybe we have a clustering of these events right now, maybe not (you’d have to look at the actual statistics … you know, data), but nothing on Earth has changed since last week when we weren’t all panicking about the “Ring of Fire”.

Let’s appreciation the planet for what it is: a tectonically active place where things like eruptions and earthquakes happen. We don’t need to use inaccurate literary devices that merely make things sound worse.