Newly Unearthed Papers From Fossil Hunters Include An Ode to Bones 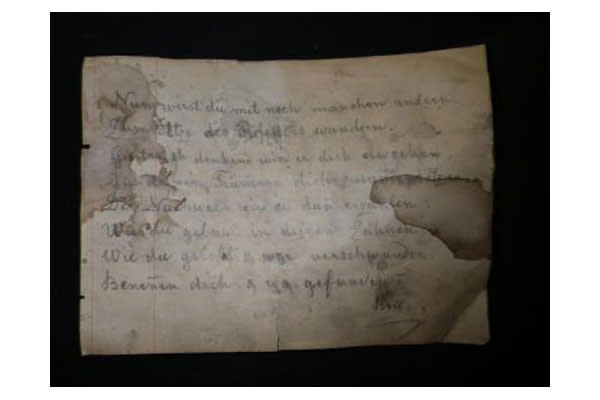 This poem in praise of the Permian amphibian Eryops

was scrawled on the back of a label now in the American Museum of Natural History by Jacob Boll, a Swiss-German fossil hunter involved in a tumultuous 19th-century paleontology feud. Graduate students and post-docs do a lot of important work in science these days, in the names of their more eminent supervisors, and there was a similar set-up in the early days of American paleontology. Many of the fossils named by and attributed to E.D. Cope and O.C. Marsh, archenemies and the era's most prominent paleontologists, were collected in the field by hired hunters like Boll and his contemporary Robert T. Hill, who both worked for Cope. Paleontologists sifting through papers in the library of Southern Methodist University recently came across

letters between Hill and Cope and, while examining specimens at AMNH, happened on Boll's little poem. Here is a translation: "Now you will with some few others Trek to the professor's seat. Awakened through his careful thought, Be reassembled from your fragments, To tell to others yet to come From the sculpting of your teeth How you lived and disappeared, Name you he will, and what he found." Watch this video about the Bone Wars, as Cope and Marsh's feud was known, to hear the poem read aloud and learn more details about the trove of papers: http://youtu.be/Czl5-krm-cc

Humans and Neanderthals May Have Shared Jewelry Designs