Swans will sacrifice sleep to find the best feeding spots 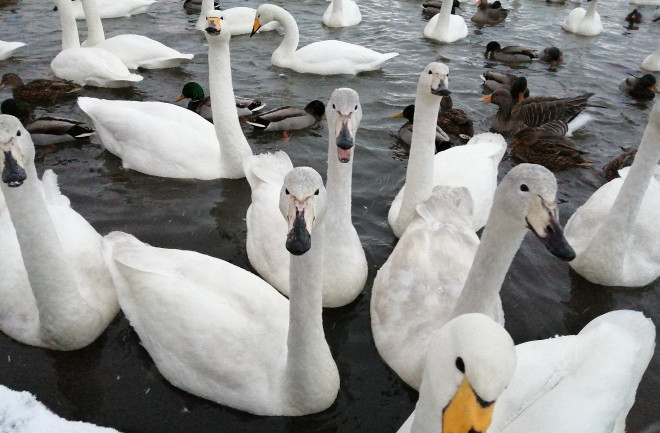 According to a recent study from the University of Exeter and the Wildfowl & Wetlands Trust (WWT), swans are willing to give up sleep to find the best foraging spots.

The study focused on mute and whooper swans residing in the WWT Caerlaverock National Nature Reserve in Scotland via live-stream webcam. The webcam allowed researchers to monitor four key behaviors —  foraging, maintenance (preening, cleaning and oiling feathers), aggression and resting. The findings indicate that the swans would trade resting for aggression when it comes to the best foraging spots.

"These swans use aggression if there's competition over foraging areas," says Paul Rose, from the University of Exeter and WWT in a press release. "Our findings show that this requires a trade-off, and that both species reduce resting time to allow for this aggression.”

Researchers suggest migration causes this trade off for whooper swans, as they spend their winters at Caerlaverock National Nature Reserve. Mute swans live in the reserve year-round and, according to Rose, can be more ‘flexible’ when it comes to their behavior because they do not need to store as much fat and energy for migration.

Researchers are hoping to use this new data to help reserve managers redesign this habitat and provide enough forage to lessen swan aggression.

"By providing enough foraging spots for the birds, we can reduce the need for aggression around desirable feeding spots, giving them more time to rest," says Rose in a press release. "This can help to ensure that migratory species don’t 'push out' non-migratory species when they mix in the same wintering locations.”