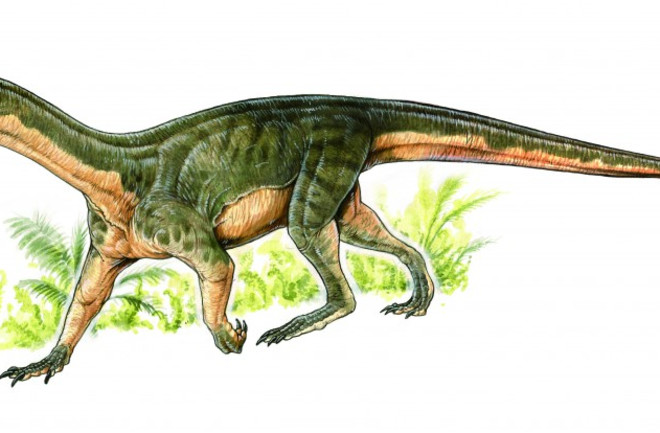 Meet Teleocrater rhadinus, the non-dinosaur telling a surprising new story of dinosaur evolution. (Credit Museo Argentino de Ciencias Naturales "Bernardino Rivadavia"/Gabriel Lio) Well, well, well... looks like it's time for yet another shake-up in the dinosaur story, this time courtesy of one of the animals' early relatives, Teleocrater rhadinus. The first description of the animal, published today, reveals the conventional chronology of how dinosaurs bodies evolved might be just a wee bit off, give or take several million years. With reverberations from a proposed massive rewrite of the dinosaur family tree still echoing, here comes a species new to science but very old in the archosaur lineage. (Crocodilians and birds are the only archosaurs still around, but extinct archosaurs include dinosaurs, pterosaurs and some marine reptiles.) Around 245 million years ago in what's now southern Tanzania, Teleocrater rhadinus — described today in Nature —was about six feet long and not much of a runner. Me too, Teleocrater, me too. Teleocrater was a cousin to dinosaurs, predating the animals, but with a mix of traits so unexpected that researchers created a new branch of the archosaur tree: Aphanosauria. Split The Difference What's so wild about Teleocrater? Well, a few things. Let's start with its age. Found at a single site in Tanzania's Ruhuhu Basin, the remains of at least three individuals are dated to the early part of Anisian age of the middle of the Triassic, about 242 to 247 million years ago. That's an important period in archosaur evolution, because it's right after the Big Split between crocodilians and the avian lineage. Don't let the term "avian lineage" fool you. It doesn't mean just birds, but rather all archosaurs that are more bird-like than crocodilian. So yes, animals such as the tank-like Triceratops and even rather croc-ish Spinosaurus, because they are both dinosaurs, fall into the "avian lineage" pile. So do all the other dinosaurs and pterosaurs. We don't have a lot of fossils from this period, so the stem-avians, or earliest members of the avian lineage, have been difficult to understand. Adding Teleocrater to the mix matters because it has a number of physical traits that many researchers thought evolved much later and only in dinosaurs. To be clear: Teleocrater is not an ancestor of dinosaurs, but an earlier animal that evolved post-split with the crocodilians. The fact that is has certain anatomical features does not suggest these traits were passed on from it to dinosaurs (they weren't) but rather that these traits evolved earlier than we thought in this entire archosaur branch. It's kind of like the trait of walking upright, or bipedalism, in our own family tree. It evolved several million years ago and the trait was passed on to a number of hominin species, such as Australopithecus afarensis, A. africanus and A. prometheus, to name but a few, but only one of those lineages eventually evolved into our own species (which one? Ah, the science is still out on that).

T. rhadinus was about six feet long. The scale equals 25cm or just under 10 inches. (Credit Scott Hartman) The unexpected features spotted in Teleocrater are generally subtle, such as the shape of depressions in certain areas of the skull. The animal also retained a number of traits more similar to even earlier archosaurs, before the big Croc-y/Birdish split — the reconstructions give it, for example, hindlimb proportions more like that of a slow-moving, non-running crocodilian than the fleet-footed bipeds that show up in early Dinosauria. Teleocrater and Friends When the researchers behind today's paper created the new clade of Aphanosauria early in the avian archosaur lineage to place Teleocrater, they didn't want him to be all alone, so they gave him some friends. Okay, that's not really the case...phylogenetic analysis of Teleocrater and some other very early stem-avian fossils determined they could all fall into the aphanosaur gang. For example, Yarasuchus, found in 2005 in India and previously assigned to the rauisuchians, a controversial clan of crocodilians (not all paleontologists think Rauisuchia is a thing), gets moved to Aphanosauria based on analysis of characteristics it shares with Teleocrater and a few other animals. The gist of all this is two-fold. First, Teleocrater is sporting some dinosaur-ish anatomy that we would not expect to find this early in the fossil record, which means certain aspects of the dinosaur body evolved several million years before we thought. Second, its peculiar blend of crocodilian and avian traits, plus its age and position on the archosaur tree, suggests that we might be wrong about the immediate ancestors of dinosaurs. For a long time researchers assumed that dinosaurs evolved from something like the lagerpetids, which were fleet-footed, bitey bipeds — though we have scant fossil evidence of them. If you're having trouble visualizing how this all shakes out (and hey, not everyone is up on Archosauria minutiae), today's paper includes a helpful revised family tree:

Crocodilians (gray) split early on from the other archosaurs that were more bird-like anatomically, including dinosaurs (blue) and pterosaurs (orange). Today's paper reorganizes the species known from the earliest days of the bird-like side of that split, and places new-to-science Teleocrater in that group (yellow). The maps on the right, showing the supercontinent Pangaea, are marked with fossils analyzed in the study from the various clades, or branches. (Credit: doi:10.1038/nature22037) And if you just want to enjoy more great illustrations, here is a Teleocrater definitely ready for its close-up:

What do I love? Archosaur illustrations with a bit of panache, like this depiction of Teleocrater making short work of a cynodont, one of our distant ancestors. (Credit Museo Argentino de Ciencias Naturales "Bernardino Rivadavia"/Gabriel Lio)