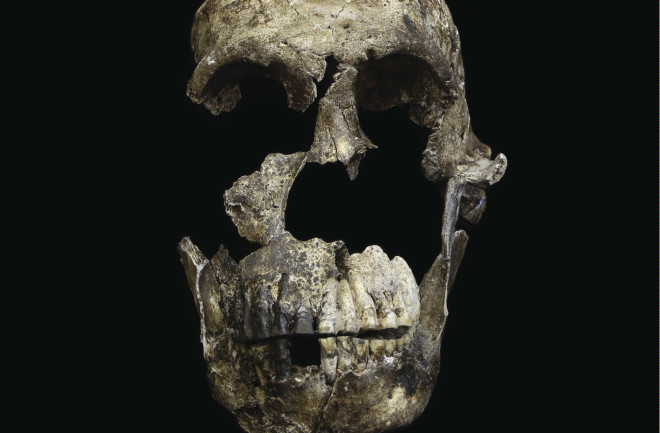 The skull of a Homo naledi specimen named "Neo." (Credit: Wits University/John Hawks) With a series of papers out today, Homo naledi gets both a birthdate and more complete. Discovered in a South African cave,H. naledi first came to light in 2015, in a paper by University of the Witwatersrand anthropologist Lee Berger. Though the remains were undated at the time, estimates put them at anywhere from 100,000 to several million years old. This was based on a physical analysis of the bones, which contained a curious mixture of modern and archaic traits. Now, after putting the remains through a rigorous series of tests, Berger and his coauthors have shown that these individuals lived between 236,000 and 335,000 years ago, co-existing, at least for a time, with modern humans. Also in the series of papers released Tuesday in the journal eLife is the announcement of a new chamber within the Rising Star cave where the hominin species was first found. It too contains a collection of H. naledi bones, including at least three individuals and one "remarkably complete" specimen with a nearly intact skull.

Aware of the significance of their find, the authors subjected their specimens and the surrounding sediments to multiple dating tests. They began by dating the sediments that the fossils were found in, and moved on to direct dating of the fossils themselves, subjecting the hominin teeth to electron spin resonance analysis and conducting uranium-thorium decay testing on the bones. "This is the most rigorously dated site that has ever been done in South Africa," says John Hawks, a professor of paleoanthropology at the University of Wisconsin-Madison and Berger’s frequent collaborator. While the dating is robust, the presence of such a primitive-looking hominin species so late in our history is perplexing. In addition to an upper body more suited for tree-dwelling, H. naledi had tiny brains, smaller even than a chimpanzee, which would have left them at a disadvantage when competing with the more intelligent hominin species in the same area around that time. It's not even known if they could use tools, although it's certainly a possibility. "We used to think that all of the archaeology of Africa, all of these larger brains, the evolution of big-brained hominins, was some sort of feedback process like a snowball rolling down the hill where once you start down the human path you’re going to end up with big brains and very sophisticated technology. Naledi shows us that's not the case," Hawks says.

Why Were They There?

One hint at their capabilities comes from the very fact that they were found in the cave. The Dinaledi chamber where the first bones were found and the Lesedi chamber newly described today both lie down narrow, tortuous passages that only the slimmest of adults can reach. Both rooms lie within an area of complete darkness as well. The researchers were able to rule out falls, wild animals and natural causes as possible reasons for the bones' presence, indicating that they were likely placed there by H. naledi themselves at a significant effort. Hawks and Berger hold that such a purposeful placement of the dead hints at the kind of burial rituals only seen in more advanced hominins.

Schematic of the Rising Star cave system. (Credit: Marina Elliott/Wits University) "If you thought this was a freak occurrence — freak by definition happens once, and we now have two,” Hawks says. "Everything that we proposed as a hypothesis for the Dinaledi chamber, the Lesedi chamber replicates the same data." Although the bones may not have arrived in the cave by chance, hard evidence for some kind of burial ritual is still lacking. "I fail to see how the new chamber and the few [new] specimens within it contribute anything new or meaningful to the prior speculation that H. naledi engaged in mortuary behaviors. I’m also not sure that dumping dead, decomposing conspecifics – if that is indeed what happened – would imply anything funerary or especially cognitive," says William Junger, a paleoanthropologist at Stony Brook University, in an email.

Look Naledi In the Face

The reconstructed skeleton of the H. naledi "Neo." (Credit: Wits University/ John Hawks) Still the astonishing completeness of one particular specimen in the Lesedi chamber is cause for celebration. It belongs to an adult male the team has named "Neo," which means "a gift" in the Sesotho language spoken in the region. The new skeleton ...gives us for the first time the face of Naledi," Hawks says. "It confirms almost all of the anatomical details that we noticed in the Dinaledi chamber." The researchers are now searching through the rest of the Rising Star cave, as well as other sites in the region, to see if additional evidence of H. naledi turns up, according to Hawks. They are also focusing on shallower regions of the cave on the suspicion that the hominins may have used it for other purposes as well. One of their main targets is evidence of fire, which they believe would have been necessary for them to push so deep into the cave. While the first evidence of fire predates these specimens, it's unknown if they were capable of utilizing it. Regardless, the finds do argue for a more complex view of hominins in early Africa. Conventional wisdom held that we are the product of a lineage of incrementally more intelligent species. Given that multiple species, with very different brain sizes, co-existed at the same time, that view is becoming more and more outdated.