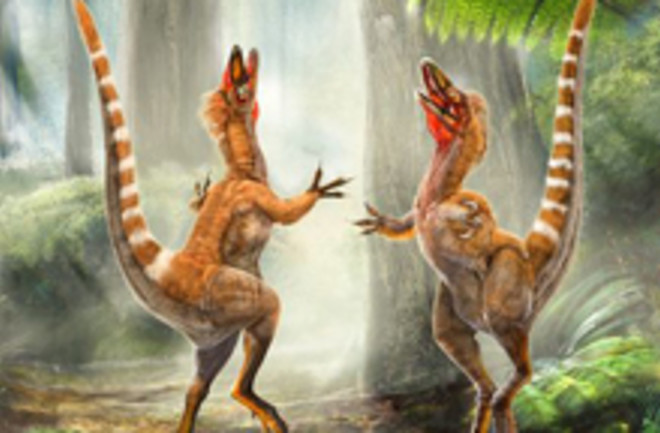 As much as paleontologists have sorted out about the dinosaurs, one of the main aspects of their appearance—what color they were—has remained mysterious. But in a new Naturestudy, a team of British and Chinese scientists report that they found a way to unlock the color patters of one of the earliest feathery dinosaurs—it had a red mohawk, they say, with a red and white striped tail. The dino in question is called Sinosauropteryx, which lived about 125 million years ago. Looking at fossils found in China, the team led by Mike Benton found what they think are the remains of feathers. And they found something inside the feathers that matches modern birds: melanosomes. These structures provide the melanin pigment in bird feathers (and human hair), and what color they are depends on the shape.

. Analyzing the Sinosauropteryx remains, the team found that spherical and sausage-shaped melanosomes alternated in its tail, which indicated to them that it would have been striped red and gray.

Why would a dinosaur need a striped tail? Many birds, the living descendants of non-avian dinosaurs, use brightly colored tails for courtship displays. [National Geographic News]

. They also found a "mohawk" of feathers running down its head to its back, but these showed just signs of red, not stripes. You have to get lucky to find such evidence.

Dinosaur fossils are mostly drab collections of mineralized bones. A few preserve traces of skin, and fewer still preserve structures that many scientists have argued are feathers [The New York Times]

. But, Benton argues, his team's stroke of good fortune lends more weight to the idea that birds descended from the dinosaurs called theropods, of which Sinosauropteryx was one:

"Critics have said that these visible spiny structures could be shredded connective tissue. But the discovery of melanosomes within the bristles finally proves that some early dinosaurs were indeed feathered" [BBC News]