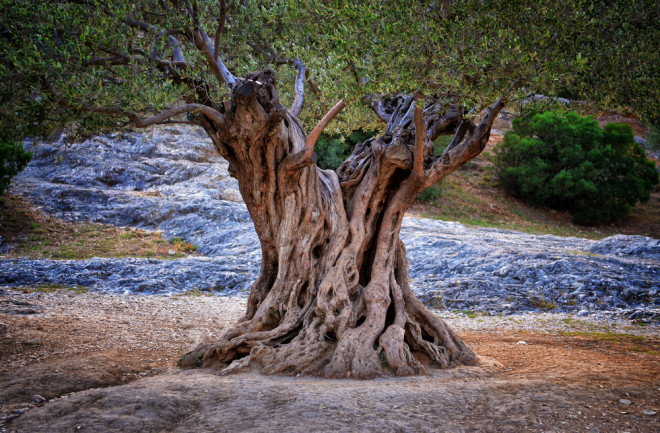 (Credit: Martin M303/Shutterstock)Scientists may have miscalculated the age of an olive branch that has served as a key piece of evidence in dating the Santorini eruption, according to a new study.The findings cast doubt on the accuracy of an analysis of the millennia-old branch, suggesting it may predate by several decades the natural disaster that fundamentally altered the political landscape of the Mediterranean and has been used to anchor much of the chronology of ancient history.

As Olive and Breathe

The conclusion that the branch dates to somewhere between 1,600 and 1,627 BCE — rather than 1,500 BCE, the date given by archaeologists — was based on the assumption that the outermost ring of an olive tree corresponds to the last year the tree was alive and growing. However, the new study contradicts this notion. After measuring the radiocarbon concentrations in 20 samples from the trunk of a modern tree, and another 11 from a live branch cut in 2013, physicist Elisabetta Boaretto and her colleagues at Israel’s Weizmann Institute of Science found that olive tree rings don’t reveal their secrets so easily.“The surprise came,” Boaretto said, “when we arrived at a point where the tree jumped 30 years.”In fact, she said, it turns out the dates of rings can vary by as much as half a century. This is due to an idiosyncrasy of olive trees — different sections of roots serve only certain sections of the tree. When roots die, the part of the tree relying on their water dies with them, while the rest keeps growing. This explains the characteristic non-circular trunk.Other times, new trunks develop around the base of the tree, and gradually merge together with the trunk until their rings are indistinguishable.It reveals the difficulty in dating olive trees reliably. Because the rings touching the bark do not necessarily represent the tree’s most recent growth, they may not accurately reflect the date the tree was buried alive in a catastrophic event. Rather, they may be up to 50 years older.However, the researchers note that the previous analysis of the ancient olive branch, along with other analyses of plant matter buried beneath volcanic debris, still presents solid evidence that the eruption occurred in the 17th century BCE.In contrast, archaeological research has generally placed the event in the 16th century BCE, a few decades after the founding of the New Kingdom in Egypt.

The timing of the disaster, and of levels of debris it generated, has been a subject of heavy debate for years. But whenever it actually did blow, Santorini was among the largest explosion humans ever witnessed. Historians believe it may have sparked the decline of a thriving Minoan civilization on Crete and other Aegean islands, after which the the Mycenaean city states emerged on mainland Greece as the local dominant power.Because the eruption scattered debris across the Eastern Mediterranean, it also serves as a fixed point for understanding the chronology of the Bronze Age in that region.As such, the true date of the eruption has significant consequences for our understanding of the world at that time and after, especially regarding the connections between the Aegean, Egypt and the Levant. The ancient olive branch is a major puzzle piece in determining when the eruption took place.Aside from this study, Boaretto said their findings could influence future efforts to establish chronology, considering olive trees are common throughout the archaeological record, particularly in the Mediterranean.“The beauty of this study,” Boaretto said, “is that we can understand better now the complexity of this tree, which is a very hard tree to study.”