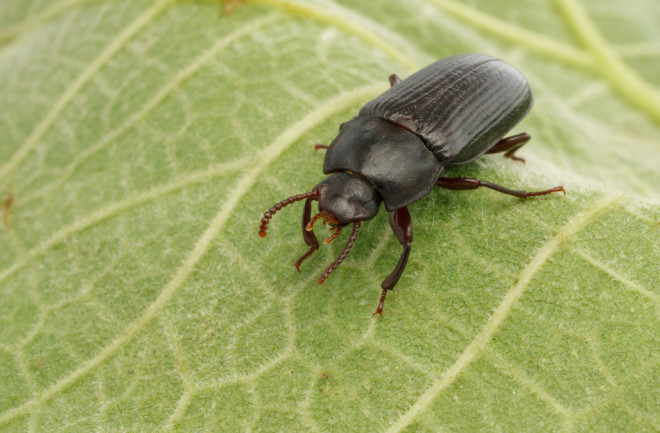 The researchers studied the antifreeze protein of the mealworm beetle to understand how the protein latches onto tiny ice crystals and keeps them from growing larger. (Credit: Akil Rolle-Rowan/shutterstock)Without an insulating coat of fat or fur, what’s an insect to do to survive cold winters? Some insects, like the mealworm beetle, are blessed with antifreeze proteins that keep them from freezing from the inside out.For decades, scientists knew this natural antifreeze existed, but they only had a vague idea of how it worked. Somehow, the proteins attach to tiny ice crystals that begin forming in cold water to keep the crystals from growing larger and harming the insect.Chemists at the University of Utah and the University of California San Diego used computer simulations of antifreeze proteins and water to understand what’s going on at a molecular level. They found that the protein molecules just need to be parallel to ice crystal surfaces to bind to the ice — no need for the surrounding water molecules to organize into an ice-like structure before the proteins attached, like scientists previously supposed. The scientists anticipate that their findings will help other researchers understand how ice crystals form in clouds or develop more effective antifreeze products inspired by insects’ natural antifreeze. “There’s a big potential market for antifreeze based on the same mechanism,” said study author Valeria Molinero in a press release, “but if you don’t understand the mechanism, it’s difficult to define and optimize molecules.”The study was published Monday in the Proceedings of the National Academy of Science.