This week, the startling image of a 1,000 pound bull shark has been circulating the internets. But what really caught my eye was the quote from the lead researcher. He told news outlets that bull sharks "have the most testosterone of any animal on the planet, so that should tell you a little something." Tsk tsk. No matter what those websites tell you, it's simply not true. 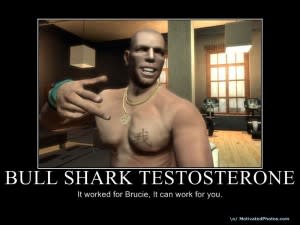 This isn't the first time I have heard this whole bull sharks and testosterone bit. Indeed, all over the internet, you see claims that bull sharks are so aggressive because of their insane testosterone levels. But it was the character Bruce Kibbutz in Grand Theft Auto IV that really got people talking about bull shark testosterone. During the game, the roid-raging fitness freak explains how he juices on testosterone taken from Chilean bull sharks. Suddenly, extreme body builders and skeptics wanted to know if you could really bulk up on bull shark blood. The rumor, as I'd heard it in college, is that the fierce attitudes of these large and aggressive sharks is due to unfathomably high circulating levels of testosterone. Specifically, these menacing monsters supposedly have higher serum testosterone levels than any species on the planet, land or sea, and that even a female bull shark has higher levels than a testosterone-raged male elephant in musth. I know I'm as much to blame as anyone, as I've repeated that line myself. But when I was asked about it, I realized that I didn't know if it's true. How do the circulating testosterone levels compare between bull sharks and other species? Could you procure enough testosterone by catching and eating bull sharks to beef up your body? Let's start with that elephant. In the red corner, standing up to 11.5 feet tall and weighing in at up to 20,000 lbs,

we have the African Bush Elephant (Loxodonta africana). What's the testosterone level in this whomping beast? During much of the year, not much. Male elephants, on average, have less than 2 ng/ml ciculating in their plasma. But wait! Big boy wants to get his groove on, and he is getting ready for a season of fighting and fornicating. So what's the male elephant in musth's testosterone level? As high as 64.4 ng/ml! About a 60 fold increase in average circulating testosterone^1. Ai! That's a lot of anger-pumping hormone. How about his opponent, the every day female bull shark (Carcharhinus leucas)?

In the blue corner, weighing in at around 505 lbs and stretching almost 12 feet long, is our large and in charge girl. She's bigger than her man, no doubt, but she still has to keep her femininity about her. After all, as a girl, if her testosterone levels are too high, she might have reproductive issues. Surely her circulating levels are lower than the male elephant's? According to the only, extremely obscure published reference with testosterone levels in a female bull shark, actually, yes, they are^2. Her circulating testosterone level is right around 0.1 ng/ml, a whole lot lower than that angry elephant. Sorry to burst bubbles, but she ain't gonna give anyone roid rage. Her man, though... My oh my. One of the two male adult bull sharks in that study had a circulating testosterone level of 358 ng/ml. Yeah, that's one roided out shark. Problem is, the other male bull shark in that study only had 2.7 ng/ml of testosterone in his serum - which is probably less than you male readers out there have pumping in your blood right now. So not all male bull sharks are running around roided out of their minds. To be fair, these were just single sharks, caught once and tested once. Without a more complete study of the average hormone levels in bull sharks, by size, season, etc, we can't really say that bull sharks have abnormally high or low testosterone levels. Of course, there is a more complete study. Not a super detailed one, but a study none the less. Rasmussen & Murru^3 studied androgen levels in a number of captive sharks over time. They found testosterone levels of 10 ng/ml to 20 ng/ml in two captive bull sharks when they measured every June for three years, just after the sharks' normal breeding season. Not too impressive, boys - not too impressive, but of course, that is in captivity, and it's unknown how captivity may affect their hormone levels. In wild bull sharks caught right before the breeding season, the serum levels were much higher: 185 ng/ml on average - which was 4 to 10 times higher than the levels they found in two other shark species, and is pretty impressive compared to the elephant. But, it turns out, it's not that hard to find high testosterone levels in fish. Other sharks have high levels, too - like the bonnethead, Sphyrna tiburo, whose highest levels have been recorded at 303 ng/ml^4. And in that species, even the girls have higher levels than our elephant - a whopping 74 ng/ml at max^5. Believe me, I'd rather go hunting bonnethead than bull sharks any day. Other fish, too, have been found to have high testosterone. Male rainbow trout have levels around the same as those of the bonnetheads^6, and heck, they sound a whole lot tastier to me than the other options. Just sayin'. Sorry folks, but according to the best, albeit limited scientific information we have, the idea that bull sharks are super juiced-up compared to other animals just isn't true. Yet in the news and even on the Discovery Channel's infamous Shark Week, the highest-testosterone-in-the-world bull shark is the norm. How did the data end up so skewed towards this single result? As I see it, it is the scientific community that is to blame for the impression that bull sharks are testosterone-pumped. Every other paper I read about shark hormones since the two with bull sharks cites them, specifically mentioning 358 ng/ml and that bull sharks have much higher levels than other sharks. Now that I read the papers, I see it's not the media's fault. It's the original authors that claim that bull sharks have higher testosterone than other sharks, even without presenting evidence to back it up. It started with how Rasmussen & Gruber were quick to point out how high that 358 ng/ml value is, saying it's "among the highest recorded in vertebrate serum," but didn't talk at all about why the other mature male bull shark (by their own identification) was more than one hundred fold lower. But it's really Rasmussen & Murru (hmm... that first name sounds familiar), in their discussion, who seem to overinflate their own data. They state that "a species differences in absolute concentrations appears to exist because concentrations of testosterone in both wild and captive bull sharks were about two times higher than those in mature sandbar and lemon sharks" (emphasis mine). Yet their included figure showing the yearly serum concentrations for the two captive bull sharks studied clearly shows the levels between 5 ng/ml and 20 ng/ml, while the levels for the two captive sandbar sharks sampled at the same and different times of year range from 0 ng/ml to over 40 ng/ml! Two to four times higher in bull sharks? Where? When?! But enough griping about inaccurate inflation of results. Let's say, for a hypothetical moment, that there is a time of year, size, or whatever where you could go out with a shark hook and some dead fish and guarantee getting a big boy bull shark with upwards of 300 ng/ml in his system. It's time to address the other part of the myth: Should serious users think about going fishing? You'll have one big fish to fry if you're trying to get a nice dose of testosterone by ingesting sea creatures. First off, I hope you're feeling vampiric. You want the blood, not the tissues. We don't know anything about how much testosterone is in bull shark tissues, and besides, that super high amount was in the blood... so, yeah. Cheers. Second off, unless you're planning on shooting up shark blood, you're not getting the dose you think. Orally ingested testosterone is rapidly absorbed by the gut, but it's also converted to inactive metabolites, leaving you with only 1/6^th the dose you took remaining in active form. That's why pills and injections aren't actually of straight testosterone, they're of slightly modified chemicals that the body doesn't metabolize as easily. It also means that to get the same dose from shark as you would from a prescription (or black market) pill, you have to drink six times what you think you have to. So let's say you want to replace that 40 mg pill you bought with bull shark blood. Even if you catch that one shark that had 350 ng/ml in his serum, that means you'll have to drink down three cups of shark plasma to equal one pill. A shark tends to be about 12.3% blood by weight according to previous studies^7 - that's 6.8% blood cells and 5.5% serum, which has a specific gravity (weight per volume) of around 1.03. So say you caught an average bull shark, weighing only 350 lbs instead of the max of 500. He'll have around 44 cups of blood in him, which is only 44% plasma, so you'll need to drink 6.8 cups of blood per pill. So at 2-5 pills a day, that shark will only last you one to three days. Hey - I guess it's legal. Though somehow, I don't think athletes are going to get away with the old "I was just drinking shark blood" excuse just because of that. Of course, all of that assumes that the majority of bull sharks are swimming around with high testosterone levels, which as the data reveals, simply isn't likely. What's worse, though, is that by perpetuating the idea of roided-out sharks, we're giving credence to the idea that bull sharks are mindless killing machines with a taste for blood. While bull sharks are certainly dangerous animals, they are far from the angry maneaters they're portrayed to be. Given that you're still more likely to die from being struck by lightning that by a shark attack, and that there are probably hundreds of thousands of bull sharks in the Atlantic Ocean alone... I'd say the bull sharks are being pretty restrained.

Note: this post is updated from a version posted on Science Blogs in 2010