Is there a connection between volcanic eruptions and earthquakes? The question is complicated, but in rare cases, they might be. 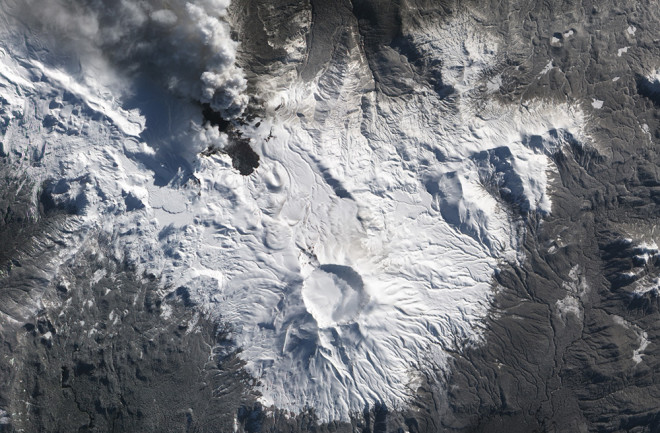 The eruption of Puyehue-Cordón Caulle in Chile seen by EO-1 on August 18, 2011. Credit: NASA Earth Observatory.

I get asked quite often if earthquakes can trigger volcanic eruptions. Usually this happens when a large earthquake happens somewhere on the planet (especially if it was near any volcano). It makes intuitive sense on two fronts. First, earthquakes will shake the ground and volcanoes appear to be vats of magma waiting to explode. Second, earthquakes and volcanoes are both part of the processes of plate tectonics, so if something massive happens in one place, could it start a chain reaction? The problem is that the connection is not as direct as it might seem and exactly what can trigger an eruption is still hotly debated.

First off, the idea that all or most volcanoes are sitting there, primed to erupt, is a misconception. Most volcanoes are in repose, meaning that they might show signs of being a potentially active volcano. These might include occasional small earthquakes, hot gasses escaping (fumaroles), hot springs and deformation of the ground up or down.

However, at most volcanoes, magma is stored miles beneath the ground. Combine this is the idea that magma needs to be eruptable -- that is, liquid enough to get out of the ground -- then you can see that a little shaking even from a large earthquake likely won't change that condition.

Currently, the most popular explanation for eruptions is the injection of new, hot magma into the volcano from below. Magma is created tens of miles beneath the volcano and it can rise and intersect older magma that has been sitting and crystallizing. This rejuvenates (as we call it) the magma and could move the magma from uneruptable to eruptable. The magma might also just keep rising and erupt.

Now, this clearly simplifies eruption triggers. Much of what is controlling whether an eruption happens is pressure -- too much then a quick release. Magma under pressure can hold more dissolved gas, so if you release the pressure, the gas forms bubbles like when you pop open a bottle of soda.

However, it takes a lot to release that pressure. There is some weak correlation between nearby big earthquakes and volcanic eruptions, but in those cases the earthquakes was big, we're talking M9 and most likely the volcano was already primed to erupt. There is no example of a volcano that was dormant suddenly roaring back just because a large earthquake occured. Even in the case of the Chilean earthquake in 1960 (the largest historic earthquake), the potentially triggered eruptions happened days to weeks after the fact.

Did an earthquake lead to a big blast in Chile?

Yet, on a planet as complex as the Earth, there are always exceptions to the rule. A new study by Camila Novoa and colleagues published in Earth and Planetary Science Letters suggests that the 2011-12 eruption of Puyehue-Cordon Caulle in Chile may have had an earthquake trigger.

The eruption of Puyehue-Cordón Caulle that started in June 2011 was one of the largest of the 21st century. It ranks as a VEI 5, putting it on par with the 1980 eruption of Mount St. Helens. Unlike that 1980 blast, Puyehue-Cordón Caulle not only had massive explosive phase, but it also produced one of the few rhyolite lava flows in historic times.

What Novoa and others propose is that local faults on the volcano that produced a M5 earthquake in early June may have changed the stress the volcano was feeling from compression to extension. This allowed the magma that was residing in the volcano to rapidly move towards the surface, creating the explosive phase of the eruption. Then these faults created conduits that the rhyolite magma followed to extrude the rhyolite lava flow.

This has a lot of stacked ideas. First, imagine your soda bottle again. If the cap is on and the soda is under pressure, it can't go anywhere. Now imagine dropping the bottle and cracking the cap. That pressure is quickly released and the soda comes bursting out. However, if the cap remains broken, the soda eventually just pours out rather than spraying. In a basic way, this is what Novoa and her colleagues posit happened at Puyehue-Cordón Caulle.

Now, this is a unique scenario based on the tectonics of the area around Puyehue-Cordón Caulle, the timing of intrusion of magma under the volcano and the composition of the magma. There was likely an intrusion of new magma under the volcano a few years before the 2011 eruption, so that event may have primed the rhyolite to erupt and caused the faults to become less stable as the stresses changed. In a sense, the earthquake may have been triggered by the magma and itself triggered the eventual eruption.

So, although the case of Puyehue-Cordón Caulle seems to point towards an earthquake triggered one of the biggest eruptions of the century, it isn't evidence that all earthquakes near volcanoes will trigger eruptions. It does mean that understanding the faults in and around potentially active volcanoes is important for assessing volcanic hazards. Just don't expect volcanic armageddon every time there is a big earthquake.