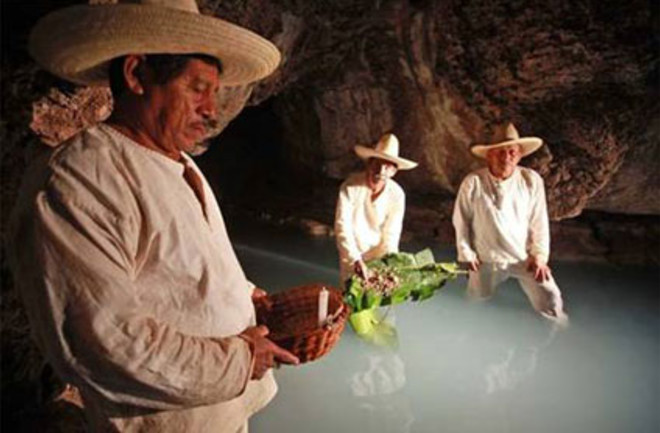 Any culture's religious ceremonies can seem strange to outsiders: For example, take the indigenous Zoque people of southern Mexico. To ask their gods for bountiful rains during the growing season they head to a sulfur cave where molly fish swim in the subterranean lake. They then toss in leaf bundles that contain a paste made from the mashed-up root of the Barbasco plant, which has a powerful anesthetic effect. When the stunned fish--which the Zoque people consider a gift from underworld gods--go belly-up, people scoop them from the water and bring them home for supper. This fishy protein helps them make it through until the harvest. This ritual came to the attention of scientists studying the molly fish, who wondered how the toxic root might be affecting fish populations in the caves. So evolutionary ecologist Michael Tobler and his colleagues did a little field research. From LiveScience:

"We learned about the ceremony, and actually attended it in 2007," Tobler recalled. "The families each take a certain amount of the fish home. The way we had ours prepared was that they were just mixed with scrambled eggs, although I hear other families fry them. They had a funny salty taste to them, although I'm not sure if that's because of their sulfuric environment, or something the cook messed up."

The researchers got more than a taste of local culture, they also came up with evidence of evolution-in-action that they published in a study

in Biology Letters. In lab experiments they compared molly fish from the ritual cave to others from an area upstream that had never swam in poisoned water, and found that the cave fish had a much higher tolerance for the Barbasco toxin. Study coauthor Mark Tobler of Texas A&M University told New Scientist

the results show that within the ritual cave, evolution has selected for fish that can survive the poison.

"The study indicates that the fish have adapted to the local Zoque traditions," says Tobler, who describes the effect as "an intimate bond between nature and local culture."

The relationship may be intimate, but the Mexican government is worried that it's also detrimental--officials have banned the ceremony, saying it's bad for the fish. Related Content: 80beats: Unnatural Evolution: Fishing Eliminates Cod Adapted for Shallow Waters

The Loom: When Love Shocks