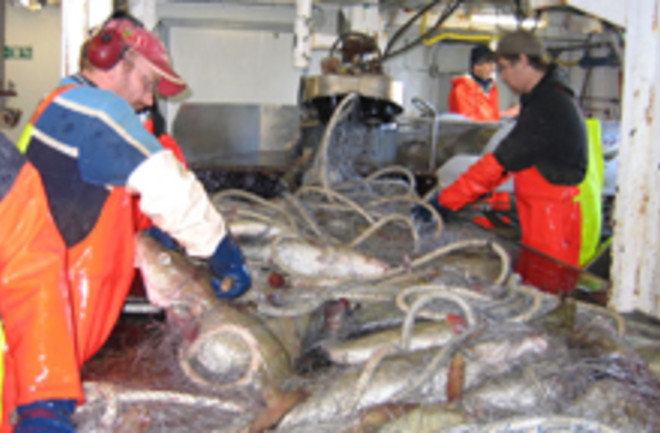 The fishing boats that relentlessly sweep the northern Atlantic Ocean looking for cod may be changing the genetics of the species, researchers say, in a case of "fisheries-induced evolution." Commercial fishing techniques used to harvest the valuable fish are wiping out the cod that swim at shallower depths, which have a genetic variant that's not seen in cod that stick to deeper water. If overfishing of cod continues, the research team believes the genetic variant will be lost all together.

"Man the hunter has become a mechanised techno-beast," the team writes. "Modern fisheries are uncontrolled experiments in evolution" [New Scientist].

Evolutionary biologist Einar Árnason and his colleagues studied the changing population of the cod fishery around Iceland; it's

one of the largest in the world, yielding roughly 200,000 metric tons a year. The stocks are in far better shape than the collapsed fisheries in the western Atlantic [ScienceNOW Daily News].

In the new study, published in the journal PLoS ONE, the researchers examined how the genotypes of Icelandic cod have changed between 1994 and 2003. It was already known that Icelandic cod that live at a shallower depth have a different variant of the pantophysin I gene than those that spend most of their time in deep water, although it's not clear what is the functional difference. In their comparison, researchers found that the shall0w-water gene is rapidly becoming scarce, which fits with the fact that most Icelandic cod fishing uses lines and nets to catch fish in fairly shallow coastal waters. Previous studies have suggested that hunting and fishing are removing the largest animals from species' gene pools: For example, stags with the largest antlers are routinely hunted and may therefore fail to reproduce, while smaller stags with scrawny antlers—the ones least prized by hunters—may live long, fruitful lives. The researchers suggest that cod are rapidly evolving due to similar human-caused pressures.

If fishing remains intense, Árnason predicts, "shallow-water fish will disappear" within 10 years. If the deep-water cod don't then spread into the shallows--and Árnason doubts they will, because their genetic difference suggests they are adapted to deep water--the size of the total population would shrink. Moreover, the industry would have to switch to expensive deep-water trawling [ScienceNOW Daily News].

Árnason also believes that the changing population could collapse entirely, as other cod fisheries have. He notes that the study also

found that cod in the Icelandic fishery are becoming sexually mature while still smaller and younger. Something similar occurred in Newfoundland cod just before that fishery crashed. "We think this too is an evolutionary response to the selective pressure of fisheries," says Árnason [New Scientist].