Researchers Catch Lake Victoria Fish in the Act of Evolving 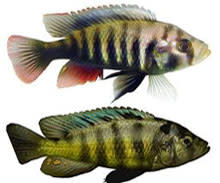 In Africa's Lake Victoria, researchers believe they've caught a fish population in the act of splitting into two distinct species. Researchers say this example of evolution-in-action is remarkable because the two sub-populations of fish aren't geographically isolated and could theoretically interbreed, but adaptations to their vision are causing them to diverge. Lead researcher Norihiro

Okada and his colleagues had previously shown that cichlid fish in Lake Victoria’s shallow waters are bathed in bluer light, while the turbid water of the lake predominantly lets redder light filter down to fish living in deeper water. The researchers showed that the fish’s eyes have adapted to this difference so that fish that live in deeper water have a pigment in their eyes that is more sensitive to red light, while shallow-water fish have a pigment that’s sensitive to blue [Science News].

Okada's new study, published in Nature [subscription required], shows that those eye adaptations have also affected mating patterns. The researchers brought some fish to their laboratory tanks, and watched to see which mates the female fish would choose. They found that females that lived in shallow water and had eyes that were sensitive to blue were more likely to spot and mate with males with a slightly bluish tinge, and that deep-water, red-sensitive females picked out the reddish males. That means that back in the lake, the eye adaptions

gave blue males a mating advantage in shallower water and red ones an edge in deeper parts of the lake because they were more attractive to female fish. "In short, what you see determines what you get, and with whom you get it on," Mark Kirkpatrick ... wrote in a Nature commentary [Reuters].

Researchers say that the two diverging populations are rapidly accumulating genetic differences, but also note that worsening pollution in Lake Victoria may disrupt the process of speciation.

In clear waters, the colour that appears brighter shifts from red to blue gradually with depth, and red and blue fish stick to their zones, cementing their genetic differences. In murky waters, however, the transition from red to blue happens much quicker and blue and red fish sometimes interbreed, destroying species differences [New Scientist].