Meet Zuul crurivastator: I Ain't 'Fraid Of No Ankylosaur 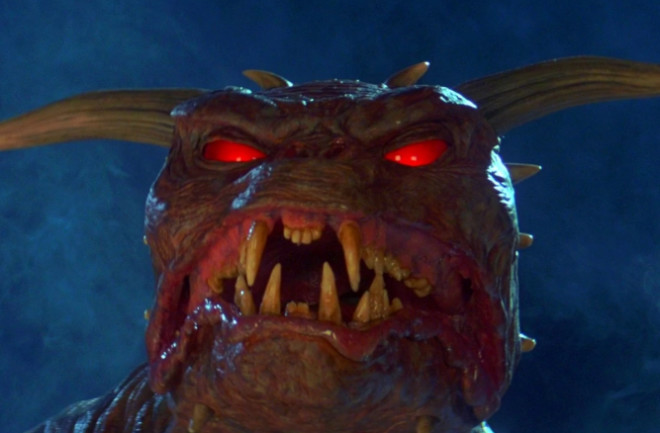 Okay, so this is not an artist rendering of Zuul crurivastator, a new ankylosaurine from Montana ... but this Ghostbusters character did inspire its name. (Courtesy Columbia Pictures)

Don't let the ferocious name of a new armored dinosaur found in Montana fool you: Zuul crurivastator (the new genus is a nod to the main Ghostbusters villain) is actually quite the softie. At least in terms of soft tissue. The wonderfully preserved specimen has loads of it, opening up a lot of possibilities for further research.

Zuul roamed North America about 75 million years ago and was about as badass as an herbivore can be. It was a large ankylosaurine, one of the armor-plated dinos that resembled tanks. Its tail ended in a weighty club.

The virtually complete, partially mummified specimen was unearthed in 2014 and is still being prepared. Researchers started at either end (the spectacularly well-preserved skull and tail club) and are working their way toward the middle. In about two years, when the work should be complete, lead author Victoria Arbour of the Royal Ontario Museum and the University of Toronto thinks Zuul will measure about six meters, or 20 feet nose to club.

Artist rendering of Z. crurivastator. Yes, I know, I was a little disappointed as well given its name (this guy looks rather sweet), but it is a Late Cretaceous herbivore rather than a supernatural monster. (Credit Danielle Dufault/Royal Ontario Museum)

I had to ask Arbour: Exactly whose shins would Zuul be destroying? The short answer is we don't know.

“It’s possible ankylosaurs used their tail clubs as weapons against Tyrannosaurus, Gorgosaurus or Albertosaurus," says Arbour, name dropping the big apex predators prowling about what's now the American West during the Late Cretaceous. "It could have been bopping its club into the shins of one of these dinosaurs — we’re not sure which one yet. But they also could have been fighting each other.”

Arbour noted living herbivores with impressive weaponry (an elk rocking a full rack or rhino with a big, pointy horn) often use it not as a defense against a predator but in competition for mates or other resources.

How Cool Is Zuul?

The new ankylosaurine is intriguing for a number of reasons — some of which researchers probably don't even know about yet. For starters, it's the most complete ankylosaurine ever found in North America. The two main points of interest on a skeleton that paleontologists use to distinguish between species, the skull and tail, are wonderfully preserved.

Also preserved: much of the animal's armor-plating, in place. “It’s exciting for me because with anklyosaurs we’ll find bony plates scattered — you don’t know where they go on the body," Arbour says. "But with Zuul, you walk in and look at this fossil and know exactly what it looked like.”

Most of the large animals found from this area of the American West are fragmentary, which makes Zuul even more precious. While Arbour and her colleages have yet to find a definitive cause of death, they believe the animal was very quickly buried by sediment before the bones and other bits could be scavenged or washed away. That's a bonus not just for studying the skeleton, but also for the chance that proteins have been preserved for the last 75 million or so years.

Paleontologists are still preparing Zuul's torso (it's currently still stuck in a huge rock block in the lab) but estimate that the animal may have been about 20 feet long. (Credit Danielle Dufault/Royal Ontario Museum)

That's not as crazy as it sounds. Earlier this year researchers confirmed a previous find of proteins in a 80 million-year-old fossil and, shockingly, a separate team using a different technique claimed to have evidence of proteins inside a fossilized rib that's a whopping 195 million years old. Arbour and her colleagues are already planning to look for potential residual proteins in the fossil; if found they may provide a more complete picture of both the animal and the dinosaur family tree.

“We’re really in the very early stages," says Arbour about testing for proteins. "But I think we have a really good shot for finding keratin.”

Finding keratin would be a big deal because it's a key protein found in hair, claws, horns, feathers and shells like those sported by turtles.

“Keratin is part of the skin," Arbour says. "Finding it would give us good insight into understanding (Zuul's) physiology. A lot of work is focused on feathers in dinosaurs. Ankylosaurs are just about as far away as you can get from a bird in the dinosaur family tree. They are the opposite of birds. But if we can see shared proteins — keratin similar to that of birds — we can tell that is shared throughout, and must have evolved very early in, dinosaurs.”

Zuul is the best preserved and most complete ankylosaurine ever from North America, and includes a gorgeously complete skull. (Credit Brian Boyle/Royal Ontario Museum)

I'm a Fool For Zuul

Okay, yes, I'm kind of smitten with this dinosaur, even more than usual. It's partly because of the name, I'll admit, but it's exciting to see such a complete fossil — especially with gobs of soft tissue preserved.

Zuul is not just a pretty-darn-close-to-perfect ankylosaur specimen: It's also filling in a chronological and geological gap that will help researchers understand not just that species but biodiversity in general for that slice of Late Cretaceous North America. I think the study published today in Royal Society Open Science, is just the first of many exploring the numerous intriguing aspects of the animal.