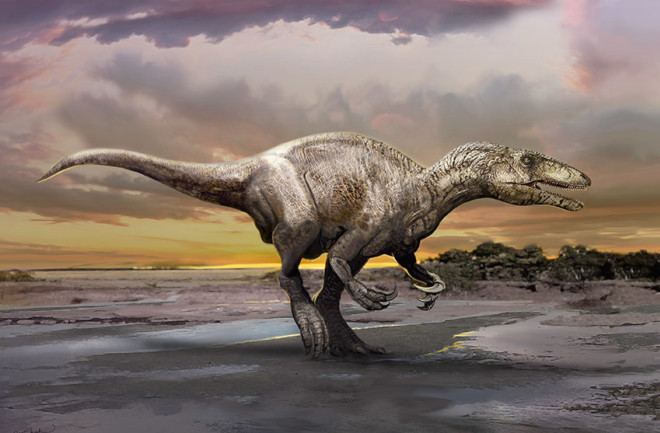 Sexy Beast of the Week: Murusraptor barrosaensis, the newest member of the megaraptor gang. The Patagonian predator of 80 million years ago was larger but had a more fine-boned build than other megaraptorids. Credit: Jan Sovak. Want to find some awesome dinosaur species new to science? Head south. South America is clearly the place to be these days, with Patagonian predator Murusraptor barrosaensis the latest intriguingly odd animal to stomp onto the paleoscene. Like fellow Argentine Gualicho shinyae, announced last week, Murusraptor is known from the partial skeleton of a single specimen. And while Gualicho made headlines for its shorty-short forelimbs, Murusraptor is like those models in perfume ads: a leggy mystery that's got people intrigued.

Murusraptor is a large, slender megaraptorid. You may read "raptor" and think oh, velociraptor*, bitey bitey, clever girl, but, while megaraptorids did have big ol' claws, they're not closely related to the stars of the Jurassic Park movies. (*Yes, I know Hollywood's idea of a velociraptor is, shall we say, just a bit outsized when compared with the fossil record, but let's not have that discussion right here and right now, 'k?) Megaraptorids were a group of carnivorous dinosaurs from the Cretaceous that, in addition to those claws, had some sweet pneumatization action going on. A number of their bones were essentially hollow, or at least partly so, full of air pockets. Murusaptor is notably, shall we say, aerated. It's a trait also seen in most modern birds and some other dinosaurs, particularly those most closely related to birds. (Don't feel too left out, puny human: those sinus cavities of yours, currently all stuffed up from summer allergies, are another example of pneumatization.) Airy bones are one reason paleontologists have found it challenging to determine where megaraptorids sit in the family tree of theropods, a diverse bunch of mostly carnivorous, bipedal dinosaurs spanning more than 230 million years, from the earliest dinos to that chicken you're eating for dinner. Within Theropoda, the megaraptorids have variously been classified as allosaurid, coelurosaurid and, more specifically within the coelurosaurs, as tyrannosaurids. Without getting too deep into the -id of it all, megaraptors are all over the map in terms of how they might be related to other dinosaurs. More on that in a bit. Murusraptor presented additional opportunities for head-scratching. Even the authors of the first paper on the animal, published today in the open-access journal PLOS One, weren't sure what they'd dug up.

Co-author Philip Currie of the University of Alberta, one of the world's leading paleontologists, admits Murusraptor initially had him stumped. Sending a quick email as he headed back into the field, Currie shared the team's process of figuring out what they had on their hands: "The animal completely puzzled us when we found it because it is an animal as large as a tyrannosaur like Albertosaurus [about 30 feet long], but was as pneumatic as an oviraptorosaur [a very bird-like bunch of dinos]...." Currie went on to explain that the dinosaur had other traits that might have placed it as a primitive, or basal, maniraptor (the line which eventually led to birds) or even a spinosaurid, a particularly whacky group of crocodilian-skulled dinosaurs that includes the largest predatory dinosaur ever known.

The fossilized bones of Murusraptor found by the team and shown here in white include much of the rear cranium. The braincase in particular is well-preserved and allowed researchers to determine the animal was not fully mature at time of death. Credit: Coria et al (2016) Only after all the fossils of the specimen — unearthed more than a decade ago — were prepped and analyzed did the team feel comfortable assigning Murusraptor to the megaraptor group. Currie and lead author Rodolfo Coria, another megafigure in paleontology, used the new data gleaned from analyzing Murusraptor to see if it would help them answer, once and for all, where on the family tree megaraptorids belonged. Spoiler alert: it didn't. When they compared specific traits of megaraptorids, including Murusraptor, with those of other dinosaurs, slight tweaks to the modeling process yielded two very different results. In other words, the jury is still out on whether these animals are allosaurids or tyrannosaurids.

While we're still not sure where Murusraptor and the other megaraptorids fit in the dinosaur evolution story, this specimen is exciting because it includes a fair chunk of the cranium. In particular, the braincase is beautifully preserved. In fact, it was in such great shape that the team was able to see signs of infection on the left side of the skull — no word on whether the boo-boo was responsible for the animal's death, however. Believed to be just over 21 feet long, the Murusraptor specimen was a juvenile — researchers were able to determine that because the bones of the rear skull, while knitted together as in adults, still showed their seams. That's a tip-off that the animal had not yet reached full maturity. Look for more news about that gorgeous braincase soon. For now, initial analysis of the cranium suggests Murusraptor may have had a crest on the top of its head. Show-off.

Murusraptor and last week's dino-breakout Gualicho were found in the same large basin in west-central Argentina, an area centered around the small city of Plaza Huincul. The animals were separated by millions of years, however: Murusraptor is about 80 million years old, while Gualicho is 10-14 million years older. The animals also represent different branches of the theropod family tree. They're just the latest pair of predators to emerge from the neighborhood, in addition to a number of other dinosaurs and other extinct animals discovered there. "Off the top of my head I would guess that the sites are within a hundred kilometers of each other," notes Currie. "This area (about 200 km radius around Plaza Huincul) is definitely the hot spot for dinosaurs in South America."