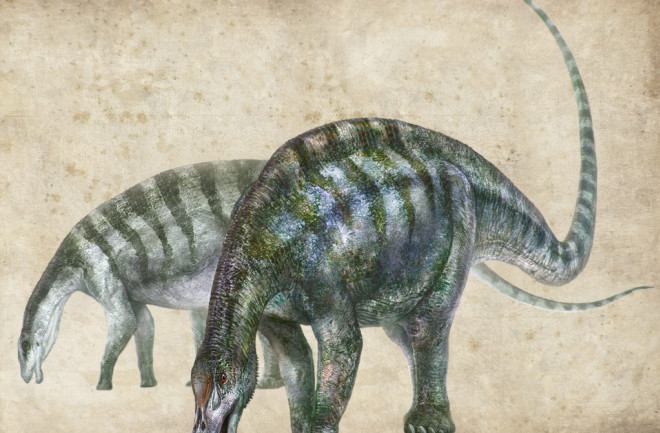 Lingwulong shenqi, a new dinosaur known from the fossils of multiple individuals, is a Jurassic surprise. It's significantly older than other dinosaurs of its kind and is the earliest example found in China, challenging conventional ideas about the timing and spread of the four-legged plant-eaters. (Credit: Zhang Zongda)Lingwulong shenqi, a newly described, 174-million-year-old dinosaur, is more than just another giant herbivore to add to the fossil record. Its age and location are unexpected, and upset notions about dino diversity and distribution during the Jurassic Period. Lingwulong's name translates as "the amazing dragon of Lingwu," the region in northwestern China where multiple specimens have been excavated over the past 13 years. I'll be honest with you: If your idea of an amazing dragon is based on "Game of Thrones," you're going to be disappointed. No swooping into battle at the head of the Dothraki horde or obliterating an 8,000-year-old wall of ice here. If, however, you love it when a fossil makes a field rethink things, well, prepare to be amazed. Lingwulong, simply put, should not have been walking around the early Middle Jurassic at all, and especially not in China. Surprise! Since 2005, researchers working the site in Lingwu have found at least seven (and as many as ten) individual Lingwulong specimens, ranging in age from juveniles to adults that were around 60 feet long. The material found includes two partial skulls: rare finds for sauropods, the long-necked, whip-tailed plant-eaters that grew to epic proportions. After death, the animals' relatively small heads, at the end of those superswan necks, were typically the first bit to detach from the rest and get washed away or scavenged. Having the skulls is particularly valuable because, generally speaking, much of sauropod diversity was writ in their noggins, including the shape of the snout and arrangement of teeth. Anatomical features of the cranial material, sometimes subtle, were significant both to confirm it was a new species and figure out where to place Lingwulong in the greater sauropod family tree. The team classified Lingwulong as a diplodocoid, the earliest known by more than 15 million years and by far the earliest one known in East Asia. The age of Lingwulong is important because the diplodocoids represent the start of the neosauropods, sometimes called advanced sauropods: the evolutionary apex of these titanic vegans. Finding a diplodocoid walking around 174 million years ago not only pushes back the start date for neosauropods, but due to tectonic shiftiness, it also suggests that the entire span of sauropod evolution may have gotten an earlier start than previously thought. About those tectonic plates... No Dinosaur Is An Island Paleontologists have long noticed a distinct difference between the Jurassic animals of East Asia and the rest of the world. Many species were present only in East Asia, while others show up everywhere except there. When the supercontinent of Pangaea began busting up about 200 million years ago, the land masses that would become today's continents lurched away from each other. Massive seaways formed between them and then disappeared, sometimes repeatedly. There's evidence to believe that one such body of water opened up between Europe and Asia starting in the Middle Jurassic, essentially cutting off China and its immediate surroundings from the rest of the world. The isolation lasted into the Early Cretaceous, after which the seaway shrank, allowing for migration overland once more. The sudden influx of many "foreign" groups of animals, including dinosaurs, is reflected in East Asian fossils from that later period. In fact, in 2009, researchers described what was then the oldest diplodocoid found in Asia, dating to the Early Cretaceous. Here's the thing: if that seaway did cut East Asia off, then diplodocoid Lingwulong must have been in China before that happened, which means diplodocoids, among the earliest of the advanced sauropods, must have already evolved, and already been spread over a large geographical area, given that diplodocoids pop up all over the rest of the world by the Late Jurassic, when East Asia was still isolated. The gist of today's announcement is not just hey, they found an amazing dragon! It's also a reminder that there are plenty of paleontological surprises — and revisions to convention — still out there. The open-access study appears today in Nature Communications.

Members of the excavation team measure part of a shoulder belonging to a Lingwulong specimen in situ. (Credit: Xu Xing)