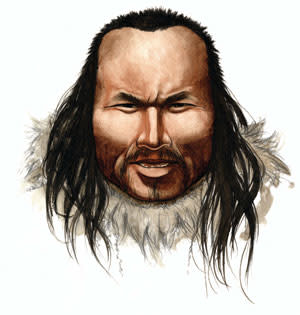 Meet "Inuk". He is the ninth human to have their entire genome sequenced but unlike the previous eight, he has been dead for some 4,000 years old. Even so, DNA samples from a tuft of his frozen hair have revealed much about his appearance and his ancestry.

Inuk had brown eyes and brown skin. His blood type was A+. His hair was thick and dark but had he lived, he might not have kept it - his genes reveal a high risk of baldness. Inuk may well have died quite young. Like many Asians and Native Americans, his front teeth were "shovel-graded", meaning that their back faces had ridged sides and concave middles. We even know about his earwax - it was dry, again like many Asians and Native Americans, rather than the wet wax that dominates other ethnic groups.

Inuk is the singular of Inuit and it means "man". He was one of the Saqqaq people, one of the first cultures to settle in the frozen north of the New World. Few of their remains have been found - all we have are four small tufts of hair and four small pieces of bone. So Inuk's genome is a treasure trove of knowledge about this extinct Eskimo culture. His remains were discovered in Greenland in the 1980s and his genome has just been sequenced by a large team of scientists from 8 countries, led by Morten Rasmussen, Yingrui Li and Stinus Lindgreen.

This isn't the first time that scientists have tried to sequence the genes of an ancient human (or related species). So far, the most successful result was a first draft of the Neanderthal genome based on bone and tooth samples. It comprises just 63% of the total genome, but even getting this much was a struggle. Ancient genomes aren't easy to decipher. Even if enough tissue is preserved, it is often riddled with the DNA of fungi and bacteria. The very act of extracting the tissues often adds human DNA to the list of contaminants.

Scientists have developed ingenious workarounds to this problem, but Rasmussen's team solved it by working with a well-frozen specimen and focusing on his hair. Hair is a rich source of DNA and it protects genomes from both damaging elements and contaminating microbes. It allowed scientists to sequence the genome of the woolly mammoth and it has now done the same for Inuk. Around 80% of the DNA recovered from a tuft was Inuk's hair was human, with no evidence of modern contamination. After all, all the scientists who handled the samples were European and there weren't any traces of European sequences in the deciphered genome.

Rasmussen's group used next-generation sequencing technology to analyse the recovered DNA. These powerful techniques allowed them to sequence around 80% of the genome around 20 times. With such extensive coverage, they could be incredibly confident about exactly which sequences lay in each location. Eske Willerslev who headed the group says, "It's comparable to a modern human genome in terms of quality." For comparison, the Human Genome Project's gold standard required that the entire genome should be sequenced just 10 times.

The big challenge was to analyse these deciphered sequences to learn more about Inuk himself. Identifying a Y chromosome was the easy part - Inuk was clearly a 'he'. To delve further, Rasmussen looked at parts of the genome that vary from individual to individual by a single DNA letter. There are millions of these "single nucleotide polymorphisms" (or SNPs) and they can provide all sorts of clues about a person's appearance, risk of disease, ancestry and more. Rasmussen analysed more than 350,000 in Inuk's genome and matched them to known SNPs in modern humans.

For a start, the SNPs revealed that Inuk came from an inbred family. It's likely that his parents were first cousins or similarly close relatives. Even though our understanding of SNPs is still in its infancy, we can already use these sequences to predict some physical traits with 99% accuracy, including Inuk's hair, teeth, eyes, skin, blood type and earwax.

Some of the SNPs suggested that Inuk had a body adapted to cold climates. His version of the p53 gene, the so-called "guardian of the genome", more efficiently regulates an individual's metabolism to protect against the hardships of winter. He also had several other genetic changes related to the tightening of blood vessels to prevent heat loss and a tendency to store larger amounts of body fat.

As our knowledge of SNPs increases, we'll probably be able to tell much more about Inuk, including various aspects of his health. What was his risk of prostate cancer, Alzheimer's disease, or high blood pressure? The answers to these questions may not be far away.

Obviously, the genes of a single individual aren't necessarily representative of their entire population. But they can certainly recount some of the history of that population. Most theories suggest that the Saqqaq descended from travellers who migrated from the Americans, such as the Na-Dene Native Americans, or the Inuit. But Inuk tells a different story.

By comparing his genes to those of modern people from surrounding areas, Rasmussen found that Inuk is mostly closely related to three groups from Russia - the Nganasans, the Koryaks and the Chukchis. This suggests that the Saqqaq's ancestors colonised the New World independently of the ancestors of today's Inuits and Native Americans. They separated from their Chukchi relatives around 5,400 years ago before almost immediately crossing the Bering land bridge connecting Siberia and the New World.

It's a really charmed time to be a geneticist, when even 4,000 years of time can't stop ancient genes from revealing their secrets. These techniques could tell us a huge amount about our early kin. We could piece together the paths of the great human migrations. We could survey the genetic diversity of past populations, even those like Native Americans whose diversity has recently been quashed at the hands of Europeans. And we could plot the rise and fall of disease-related genes.

But before we get too excited, it's worth remembering that in many ways, Inuk was a rare find. His Arctic home may have been hard to live in, but it certainly helped to preserve his genes over the past millennia. In contrast, the majority of ancient human remains have so far been found in temperate or hot regions, which are far less hospitable to DNA.

Sequencing genomes from such non-frozen tissues is a massive technical hurdle and it'll be the key to ensuring that Inuk's genome isn't just a one-hit wonder. As Rasmussen concludes, "Although undoubtedly challenging, it will, if successful, take the emerging field of palaeogenomics to yet another level."