What is the difference between the human genome and a pair of headphones?

If you've ever put a pair of headphones in your pocket, you'll know how difficult it is to keep a long cord in a bundle without getting it hopelessly tangled and knotted. You'll also start to appreciate the monumental challenge that our cells face when packaging our DNA. At 2 metres in length, the human genome is longer than the average human. But in every one of our cells, the genome needs to fit inside the nucleus, a tiny compartment just 6 millionths of a metre long. How does it do it? One of the secrets behind this monumental feat of folding has just been revealed by research that shows the human genome's three-dimensional structure. A team of scientists led by Erez Lieberman-Aiden and Nynke van Berkum found that our genome folds into a shape called a "fractal globule", where the long strands of DNA are densely packed but without a single knot. It's an awe-inspiring feat of space-saving and keeps DNA accessible. When a particular gene is needed, the DNA it sits on can be easily unpacked. Lieberman explains, "The best way to think about it is that it looks like a pack of ramen noodles when you just start cooking them: really dense, but totally unentangled, so you can pull out a noodle or a bunch of noodles without disrupting the rest." Previously, scientists suggested that the genome folds into a more tangled structure called the "equilibrium globule", which is more like ramen noodles post-cooking - a massive knotted mess from which single noodles are difficult to extract. Until now, the fractal globule was a theoretical shape that existed only in the minds of mathematicians. This is the first time that it has been observed in reality. The shape was first described by a mathematician Guiseppe Peano in 1890 and in 1988, Alexander Grosberg proposed that a long molecule might spontaneously fold into such a shape under the right conditions. Still, it took till this week for anyone to observe a fractal globule in reality. "[Peano] had no idea that it described any actual object in the universe," says Lieberman-Aiden, "but it turns out it describes the genome!"

Some of the other tricks that cells use to fold the genome are well documented. At the most basic level, DNA is wrapped around proteins called histones, like a series of beads on a string. These are then twisted around each other to form a wider filament, like the individual strands of a piece of rope. Beyond that, things become less clear but this new study shows what happens at these higher levels. 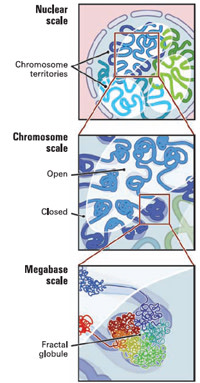 Imagine a series of beads on a string. You gather clumps of beads and crumple them together into a globule, carefully avoiding any knots or crossovers. Every row of, say, five beads gets crumpled into a globule, every row of five globules gets crumpled together, and so on and so forth. The final result is a single ball - a "globule-of-globules-of-globules". Lieberman-Aiden developed a technique called Hi-C that simultaneously analyses adjacent DNA across the entire genome, in order to reveal its 3-D shape. It relies on formaldehyde to immobilise pieces of DNA that sit next to each other, effectively freezing the genome and forming cross-links between adjacent strands. The DNA is then shredded and the cross-linked fragments are isolated, sequenced and mapped onto the reference copy of the human genome. The result is a library of all the DNA strands that were neighbours in the nucleus, which can be analysed to understand how the genome must be folded. The technique confirmed that parts of the genome that would sit far apart if it was fully stretched out are actually very close to each other in space. Because of the complicated molecular origami that goes on inside the nucleus, around three quarters of the close-contact sequences identified by the Hi-C method are actually distant ones. The research also confirmed that the nucleus is divided into two territories - an "ON" compartment where DNA is rich in genes, highly active and loosely packed, and an "OFF" compartment where DNA is gene-poor, largely inactive and densely packed for storage. Individual chromosomes snake in and out of these two compartments and when a given gene is activated, it moves from one to the other. It's not clear what defines the boundaries between these two compartments, but Lieberman-Aiden suspects that these boundaries are very sharp. As an example, Lieberman-Aiden use glow-in-the-dark molecules to tag four stretches of DNA called L1, L2, L3 and L4. They lie one after the other on chromosome 14, but in the nucleus, they pair up differently. L1 and L3 are typically found in the "ON" compartment and are always closer to each other than L2. Meanwhile, L2 and L4 are closer to each other than L3, and are usually found in OFF territory. "A huge question in biology is how all the different cells in the body perform totally different functions when all of them have the same genome," says Lieberman-Aiden. "This work suggests that the spatial arrangement of the genome in a particular nucleus is a big part of why different cells do different things." PPS: You may remember Erez from the irregular verbs paper that I recently reposted. Many thanks to Erez for the heads-up about the paper and the awesome ramen noodle analogy. Reference: Science 10.1126/science.1181369 More on genomes: