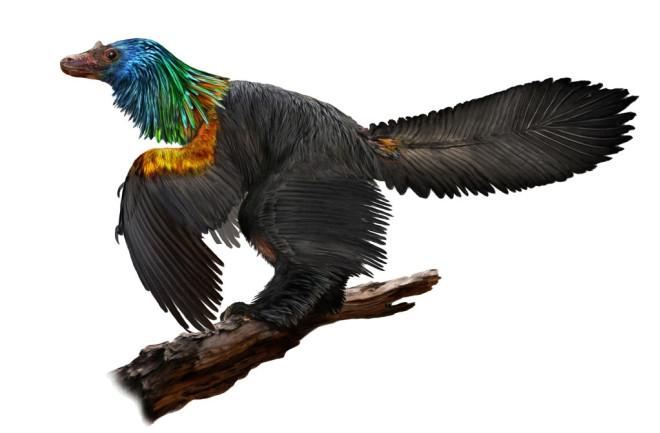 Ooh, shiny! The newest dinosaur on the paleoscene is more than a little eye-catching: Researchers believe the duck-sized Caihong juji was rocking iridescent feathers on its head, wings and tail. If it was indeed so fancy, it's the earliest example in the fossil record of such shimmering finery.

(but not any tyrannosaurs!)

. Its name translates from Mandarin as "rainbow with a big crest" and they're not kidding. C. juji had a bony crest on top of its head and long, streamer-like feathers, some of which were preserved when the animal was fossilized. And it's what researchers saw when they took a good look at those feathers that's so exciting. Melanosomes, the cellular structures that hold pigment, come in various shapes, which affect how the actual color of the feather is perceived. Platelet- or pancake-shaped melanosomes are found in iridescent feathers such as those of hummingbirds and other fancy sorts. Based on the imprints of melanosomes in the C. juji fossil, it appears the animal's head and wings, and parts of its tail, had iridescent feathers. If so, that would make C. juji, which lived 161 million years ago, the oldest known animal with iridescent feathers. By comparing the melanosome imprints in the fossil with those of modern birds, the researchers reconstructed not only the shimmy and shine of C. juji's feathers but also the specific colors they believe would have been perceived. In a word: rainbow.

C. juji is also neat because it appears to have had the oldest known example of asymmetrical feathers, which modern dinosaurs (aka birds) use to steer in flight. C. juji was grounded, however. The feathers were on its tail, not its wings as they are for birds. But the discovery leads to all kinds of intriguing questions about how and why the feathers evolved and what purpose they served.

As for the purpose of C. juji's fantastic rainbow fashion, the researchers suspect that, like many birds, its plumage was the equivalent of a "hey, baby" and attracted potential mates. I know I always like a fella with a big crest and rainbow flair.