A few eruptions dominated the news, but it was an active year for eruptions across 2021. 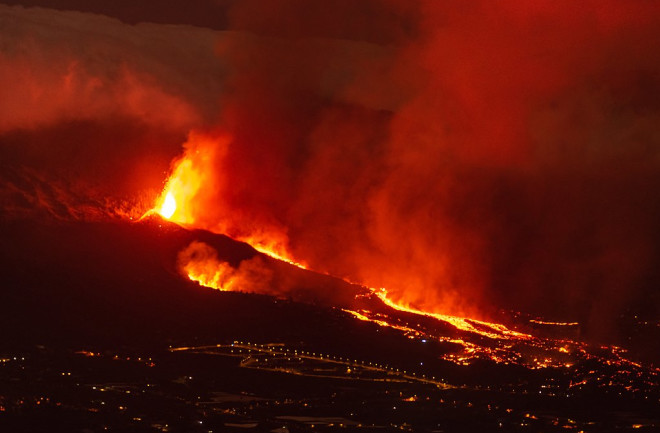 The lava flows from the eruption on La Palma in the Canary Islands on September 20, 2021. Credit: Eduardo Robaina, Wikimedia Commons.

You can all 2021 many things (most of which aren't publishable in this family venue), but uneventful is not one of them. Now, most of this was due to the ongoing COVID-19 pandemic, but the world of volcanoes saw some unexpected, impressive and deadly eruptions. If you check out the Weekly Volcanic Activity Reports over at the Smithsonian Institute/USGS Global Volcanism Program, you can read about the dozens of volcanoes that had some level of activity this year. I've decided to highlight about a dozen events that might have been the most significant of the year.

The eruption plume (white plume in the middle) and discoloured waters of the Hunga Tonga-Hunga Ha'apai eruption seen on December 24, 2021 by Landsat 8. Credit: NASA/USGS.

We'll start with the latest. Over the Christmas holidays, the head of the Tongan geological survey reported a new eruption from the mostly-submarine volcano. The ash and steam plume from the eruption even prompted some flight cancellations and created impressive lightning. This remote volcano last erupted in 2015 and typically produces pumice rafts and explosions as the hot magma interacts with sea water. The small islands that form during the eruptions tend to be destroyed by wave action as well, although the products of the 2014-15 events persisted.

A view across Taal with the crater lake island that is the home of the currently active vent. The grey color of the island is from the ash deposited over the past year. Credit: Lyndon Aguila / Wikimedia Commons.

The Philippine volcano near Manila had a much more impressive and destructive 2020. Over the course of 2021, the crater lake experienced a number of explosions driven by steam produced from the hot vents in the lake. The volcano also produced frequent earthquakes and copious sulfur dioxide emissions across the year, all implying that magma is just beneath the volcano. The unrest got so intense at Taal during July prompted evacuations of people living near the lake.

A bird's eye view of the erupting vent as a lava flow breaking the surface (bottom) at Piton de la Fournaise on Reunion Island. This shot was taken December 23, 2021. Credit: OVPF-IPGP.

Thanks to its remote location in the Indian Ocean, Piton de la Fournaise (which travels to "Furnace Peak") tends to get ignored in the news. However, the volcano was quite active from March until May and then again in mid-December. The usual eruptions are very similiar to what we see at Hawaii's Kīlauea, with lava fountains and lava flows.

The lava flows at Great Sitkin spilling down the slopes of the volcano on November 17, 2021. Credit: AVO/USGS.

The volcanoes of Alaska get a bit of the same treatment as Reunion Island, but the Alaska Volcano Observatory makes sure we have a handle on all the eruptions across the Aleutians. Over 2021, a multitude of volcanoes including Pavlof, Semisopochnoi, Veniaminof, Cleveland and Okmok. Probably the most active was Great Sitkin, where lava domes and explosions hit the island volcano. The lava dome was over 100 yards across and sometimes spilled down the slopes of the volcano (above).

Another eruption in the middle of the Pacific, this remote Japanese volcano had its first eruption in over a decade. The eruption not only sent ash and debris over 54,000 feet into the air, but also generated pumice rafts around the mostly-submarine volcano. Although that floating pumice (which is a hazard for ships) was found over 600 miles away from the volcano a few months later, any new island formed by the event was obliterated by the ocean within weeks.

The eruption in the summit crater at Kīlauea during February 2021. Credit: HVO/USGS.

Although it was no where near the action of the 2018 Leilani Estates eruption at Hawaii's Kīlauea, 2021 brought a lot of change to the summit area of the volcano. From January until May, the summit lava lake filled for over 600 feet deep. The volcano took a break between May and late September before new lava fountains opened in the Halema'uma'u crater lake and the renewed eruption has continued until the end of the year, adding another few hundred feet to the depth of the lava lake. This seems to be the "new normal" for Hawaii's most active volcano.

The ash plume from Etna in the background seen from the Naval Air Station Sigonella on February 16, 2021. Credit: US Navy.

Etna, Sicily's noisy volcano, spent the year doing what it does best: lava flows and fountains. Dozens of explosions and fountains blasted from the multiple summit vents over the year, adding over 100 feet to the height of the mountain. The fountains reached thousands of feet into the air and the accompanying ash was deposits hundreds of miles away. All this debris in the air meant that the airports on the island had to stay alert for potential delays and cancellations as the activity waxed and waned. By the end of the year, the eruption was much less aggressive, with a lot of gas emissions and some small lava flows that stretched half a mile down the volcano's slopes.

Most of the eruptions from the Democratic Republic of the Congo's most active volcano stay confined to the summit crater and its lava lake. However, this year lava flows from new fissures that opened on its southern slopes flowed into villages around Nyiragongo and all the way to the outskirts of Goma. The city sits only ~9-10 miles from the volcano, so it has been inundated by lava flows numerous times over the past century. These lava flows destroyed hundreds of buildings and killed dozens of people (mainly in accidents as they flew the lava flows). The continued activity prompted the government to mandate the evacuation of 400,000 people in early June, but luckily they were able to return a few days afterwards. However, many people remain homeless months after the lava flows stopped.

We ended 2020 with the emergence of a lava dome -- a big, black pancake -- forming in the crater at Soufrière St. Vincent. This was the first eruption of this island volcano in the Lesser Antilles since 1979, but no one was quite sure what direct the eruption might head. We got our answer in early April when the volcano blew its top, sending ash over 40,000 feet into the air and obliterating most of the dome that had formed. This eruption also produced pyroclastic flows that raced down the sides of the volcano, but luckily almost 23,000 people had already been evaucated from the area around Soufrière St. Vincent. By September, the volcano has calmed to the point where many of the evacuees could return home.

A truck buried in ash from the December 4, 2021 eruption of Semeru. Credit: PVMBG

Another explosive eruption halfway across the globe ended more tragically. An unexpected blast caused by a collapse of a lava dome in early December at Indonesia's Semeru killed at least 43 people when ash fall and numerous pyroclastic flows rained down on the villages around the volcano. The initial explosion reached 50,000 feet over the volcano and entire villages were buried in deep volcanic ash. Plans to rebuild people's homes further away from the danger zone around the volcano has been promised by Indonesian officials even as the volcano remained restless.

Two cones formed by basalt lava during the eruption of Krýsuvík-Trölladyngja volcanic system on the Reykjanes Peninsula of Iceland, seen on March 24, 2021. Credit: Wikimedia Commons.

Most of us are familiar with how volcanically-active Iceland can be. Eruptions at Eyjafafjallajökull, Grímsvötn (that did produce a number of jökulhluaps in 2021) and Bárdarbunga over the past decade are proof of that. However, it had been hundreds of years since the last eruption on the Reykjanes Peninsula near Reyjavík. In the early months of 2021, the southern part of the peninsula was hit by an impressive earthquake swarm caused by magma rising towards the surface that culminated a new eruption in late March. This eruption of a piece of the Mid-Atlantic Ridge became quite a tourist draw without causing much hazard to Iceland's capitol thanks to its runny basaltic lava. Numerous lava flows fed from multiple fountaining vents filled the valley with dark, black lava for months before the eruption ceased in mid-September. Swarms of earthquakes continue to rattle the area, suggesting that we might not have seen the last of the eruption at Krýsuvík-Trölladyngja.

Likely the most famous eruption of 2021 happened in the Canary Islands. Much like Iceland, the Canaries are no stranger to volcanic eruptions, but the island of La Palma hadn't experienced any eruptions in almost 50 years. However, after a large earthquake swarm, new fissure vents opened on the island and copious lava flows crawled towards the sea. Although the eruption was similar in style to what was concurrently happening at Krýsuvík-Trölladyngja in Iceland, the slopes around the vents on La Palma were densely populated. Thankfully, the lava flows and thin volcanic ash from the lava fountains did not cause any deaths. However, thousands of homes and billions of dollars of infrastructure were destroyed by the unrelenting lava. The eruption, one of the Canary Islands' largest in centuries, was declared over on Christmas Day after 85 days of lava.