Lonesome George's Genome Shows How the Giant Tortoise Lived Past 100 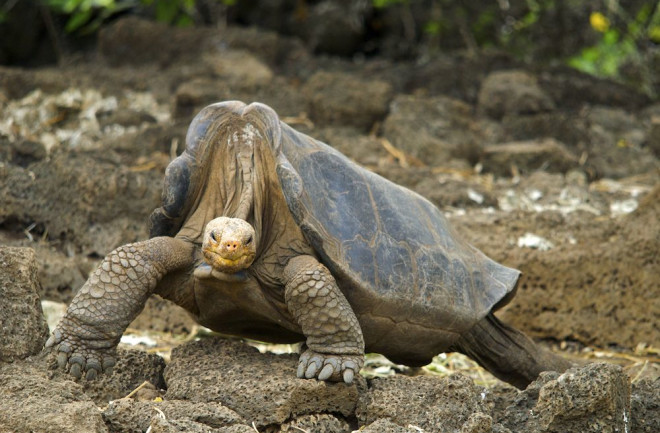 Lonesome George the giant tortoise died in 2012 at more than 100 years old. Scientists studied his genes to discover clues to how these animals live so long. (Credit: Arturo de Frias Marques/Wikipedia)

Giant tortoises have exceptionally long lifespans and often live well past 100 years old. Now, a new study unveils genetic clues to the animals’ longevity, including gene changes that may protect giant tortoises from cancer, bolster the immune system and help regulate metabolism. The findings add to how these processes contribute to aging.

López-Otín and his team scrutinized the genome of a particularly famous Pinta tortoise known as “Lonesome George.” Native to the Galapagos Islands, Pinta tortoises were exploited by whalers and fur traders in the 1800s. The population continued to drop until Lonesome George, who died in 2012, was the sole survivor. According to the Galapagos Conservancy, the turtle was one of the world’s rarest creatures, which helped him become a conservation icon. At the time of his death, Lonesome George was in good health even at an estimated age of more than 100 years old.

The researchers compared Lonesome George’s genome and the genome of another long-lived giant tortoise, the Aldabra giant tortoise, to the genomes of other animals including other reptiles but also fish, mice and humans. The comparisons revealed differences between the genomes that affect aging.

There were also differences in genes that affect metabolism in the giant tortoises. The gene for an enzyme that helps control energy production had expanded in the giant tortoises, the scientists report. Along the same lines, another gene that worsens blood sugar control in mice had lost its function in the turtles, López-Otín and colleagues report today in the journal Nature Ecology & Evolution.