Life Found in the Deepest, Unexplored Layer of the Earth's Crust 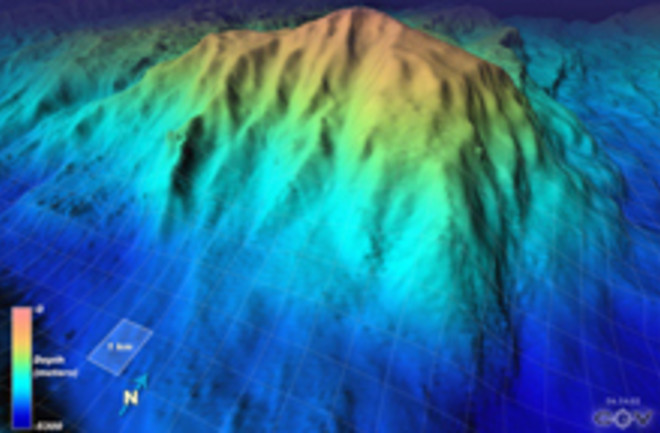 At this point, after finding microorganisms that don't mind extreme temperatures, pressure, aridity and other hardships, we shouldn't be surprised that bacteria's dominion over the Earth extends to just about anywhere we look. A new expedition to the Earth's crust has reached unprecedented depths—down to the deepest layer of the crust—and found that even there, microorganisms are tough enough to survive.

On a hypothetical journey to the centre of the Earth starting at the sea floor, you would travel through sediment, a layer of basalt, and then hit the gabbroic layer, which lies directly above the mantle. Drilling expeditions have reached this layer before, but as the basalt is difficult to pierce it happens rarely. [New Scientist]

To circumvent the Herculean task of drilling through basalt, the expedition, called the Integrated Ocean Drilling Programme

, headed out to sea to find an easier drilling location.

The Integrated Ocean Drilling Program sank its drill into the Atlantis Massif (seen above) in the central Atlantic Ocean where seismic forces have pushed the deep layer, known as the gabbroic layer, to within 230 feet of the ocean floor making it easier to reach. [UPI]

The organisms living there in the deepest part of the crust were strikingly different that the populations in other rock layers, the team says in a study

published in PLoS One.

One key difference was that archaea were absent in the gabbroic layer. Also, genetic analysis revealed that unlike their upstairs neighbours, many of the gabbroic bugs had evolved to feed off hydrocarbons like methane and benzene. This is similar to the bacteria found in oil reservoirs and contaminated soil, which could mean that the bacteria migrated down from shallower regions rather than evolving inside the crust, the team says. [New Scientist]

Each time we find life thriving in some bizarre and extreme locations on Earth, we're reminded that it might be possible for organisms to survive the extreme environments of other worlds. The researchers write in their paper:

Our results raise the intriguing possibility that hydrocarbons in very deep ocean rocks support microbial communities.... Our findings, particularly regarding the presence of genes coding for methane cycling, have implications not only for Earth's subsurface, but also for other planets such as Mars. Methane on Mars is concentrated in some equatorial regions of the atmosphere, which suggests that it is derived from localized geological sources. Although the exact mechanism by which methane forms on Mars is not known, serpentinization reactions in the Martian subsurface have recently been proposed. Therefore, similar to the Atlantis Massif, the Martian subsurface may harbor methane-consuming prokaryotes. [PLoS One]

80beats: Ice-Loving Bacteria Could Give Humans a Vaccine Assist

80beats: Do Asphalt-Loving Microbes Point the Way to Life on Titan?

80beats: The Rip Van Winkle Bug: A Microbe Is Resurrected After 120,000 Years