Satellites might be constantly watching the planet, but we don't have a dedicated orbital volcano observatory that could save countless lives and dollars. 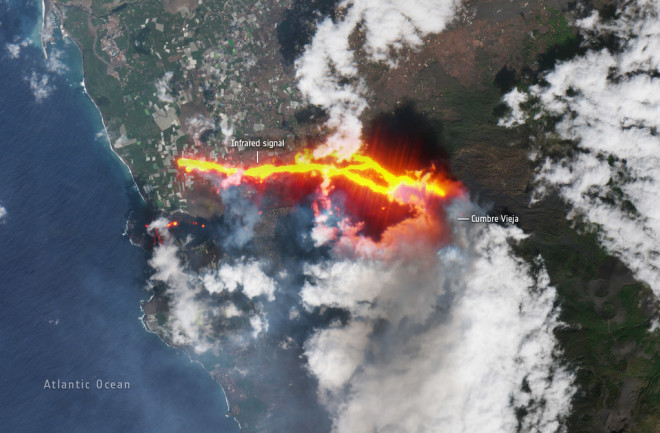 An infrared view of lava flows from the La Palma eruption on October 11, 2021, taken by Copernicus Sentinel-2. Credit: ESA.

There is a solid argument that can be made that Earth scientists -- especially geologists in particular -- aren't good at thinking "big". That isn't to say we don't have fascinating questions to answer or exciting fields of research. Rather, geologists projects tend to be a lot smaller in scale than what the astronomers and physicists propose.

Only recently did geologists start getting into the business of lobbing high profile things into space, and usually those things are visiting other planets in search of life. Well, maybe it is about time that we start thinking about how we can learn about our planet from space in a way that can capture the public's imagination.

Earth sciences from space are really a new thing. Since the start of Landsat program, we have put more and more Earth-observing satellites into space. Some of those are big and fancy like the recently-launched Landsat 9. Others are small enough to carry around with you, like Planet's Dove satellites. We have also launched climate and geophysical surveyors, like the Orbiting Carbon Observatory 2 or the twin Gravity Recovery and Climate Experiment (GRACE) satellites. All these missions (and more) have collected a treasure trove of Earth science data for us to learn about the planet.

Infrared imaging is critical for orbital volcano monitoring. As magma rises to the surface, you get a lot of heat with it. This heat might manifest as actual molten rock (lava!) or in the emissions from a volcano - steam and ash. Most of the Earth-observing satellites (EOS) like Terra, Aqua, Sentinel-2, the Landsat series and more have infrared capabilities, but they run into two problems to be truly useful for detailed observations of volcanoes: they don't observe the volcano frequently enough (time) and can't observe them in high enough detail (resolution).

A recent paper in the Bulletin of Volcanology by Michael Ramsey and others argues that our current aging fleet of Earth-observing satellites isn't up to the task of being orbital volcano observatories. Even worse, there hasn't been a lot of work into how we can improve infrared imaging from space to meet the needs of volcanologists. So, although we can take daily images of almost any spot on the planet, the real data that volcanologists might need to help with monitoring and forecasting volcano activity -- namely timely, detailed infrared -- just doesn't exist.

Ramsey, based on discussions within the volcanology community, thinks the ideal orbital volcano observation (which I am going to name LAVA: Looking At Volcanic Activity) would have a number of key characteristics. First, it would need to be in a polar orbit, similar to many of our weather and Earth-observing satellites already use. This allows for global coverage of all the major volcanic regions.

The other two vital criteria are the realms of time and space. A dedicated LAVA orbiter would hopefully allow for repeated observations of the same volcano potentially at the very least daily, but even better would be multiple times a day. This might necessitate multiple orbiters to get that kind of temporal resolution -- even the best of our Earth-observating satellites get daily coverage while others might only get a shot of the same locations once every few weeks. Those sorts of durations might provide some information, but volcanic crises can unfold in days to hours.

As for spatial resolution, the LAVA orbiter should ideally offer resolution of infrared images that is < 100 meters, and ideally closer to meter-scale. This could allow volcanologists to discern what is going on within volcanic crater or lava flow fields with much greater detail than we can currently. You also need your imager to not get saturated by the IR energy of sources like lava that can reach over 2200°F (1250°C).

Even the time of the day matters -- Ramsey suggests that any orbiter should be timed to make its passes over volcanic regions in the morning so that cloud-cover and solar heating are minimal, allowing for the best infrared imaging. None of the current or near-future Earth-observating missions use this timing.

What is boils down to is that although we have many satellites zipping around our planet snapping pictures of the Earth, none are ideally tuned for keeping an eye on volcanoes. Sure, we can capture images when the eruption has started if the right satellite is in the right place, but many times it is just luck. The LAVA orbiter, with frequent coverage, high spatial resolution and the right infrared imaging technology, could been a boon for volcano monitoring across the planet.

What's It Gonna Cost Ya?

Of course, the biggest issue beyond the technology development is the cost. The pair of Copernicus Sentinel-2 satellites, launched by ESA, cost about $200 million a piece. A big, dedicated Earth-observing satellite like Landsat-9 cost a whopping $750 million. The Terra satellite mission, launched in 1999, is just over $1 billion. Of course, missions like the James Webb Space Telescope are closer to $10 billion. All of those are likely a bit to a lot more expensive than the LAVA orbiter could be. On the other end of the spectrum, Planet's Dove mini-satellites cost in the hundreds of thousands of dollars.

So, maybe we could imagine a LAVA orbiter coming in somewhere between $300-500 million. That still sounds like a lot ... but if we consider the cost of recent volcanic disasters, like the 1991 eruption of Pinatubo ($800 million), Eyjafjallajokull in 2010 ($4 billion) or the 2018 Kilauea eruption ($800 million), you can see how quickly the damage adds up. Making it easier to monitor and forecast eruptions could, the LAVA orbiter could pay for itself quickly over its potential 10-20 year lifespan.

In the end, it is a question of who and how. If organizations like the US Geological Survey, the Japanese Meteorological Agency, the Icelandic Meteorological Office, the SERNAGEOMIN (Chilean Geological Survey) and more all work together, something like the LAVA orbiter could be a reality. Earth scientists just need to dream "big" to support such an orbiting observatory, an ideal next step in understanding how volcanoes on our planet operate.