Lesson of the Ancient Nazcas: Deforestation Can Kill a Civilization 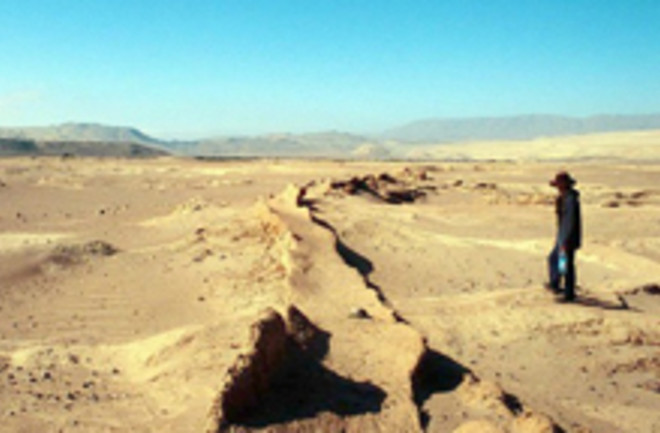 From an ancient Peruvian civilization comes this warning: Don't chop down all your trees, or there will be hell to pay. The Nazca people are famous for the enormous earthworks they carved into an arid plateau, in designs that range from simple geometrical forms to representations of animals like hummingbirds, lizards, and monkeys. They were previously known to have disappeared around A.D. 500, when massive floods powered by El Niño ravaged the valley where they made their home. Now, a new study that examined the pollen in buried layers of soil in order to trace the horticultural history of the land may have revealed why those floods were so devastating.

The Ica Valley, about 120 miles south of Lima, is barren today but was once a riverine oasis -- a fertile landscape capable of supporting many people. The key to that fertility was a tree called the huarango [Los Angeles Times]

. The huarango tree provided wood for building and fuel, and seed pods that can be ground up and used in flour or beer. Its branches caught the water in morning mists, and its roots stabilized the topsoil. Says lead researcher David Beresford-Jones:

"These were very special forests.... It is the ecological keystone species in the desert zone enhancing soil fertility and moisture and underpinning the floodplain with one of the deepest root systems of any tree known" [BBC News].

The new study, published in the journal Latin American Antiquity, found that the pollen in the older layers of soil came almost entirely from huarango trees. But by A.D. 400, pollen from corn and cotton plants had replaced the tree pollen, suggesting that the Nazca people had chopped down the forests to make room for agricultural fields.

About AD 500, a major El Niño built up in the Pacific, deluging the nearby Andes with rain. Walls of water and mud washed down the valley and over the denuded landscape, sweeping away food crops, buildings and artifacts. Beresford-Jones compared it with the 1997-98 El Niño, which left the city of Ica 6 feet underwater [Los Angeles Times].

The floods of A.D. 500 were many times worse, the researchers say. In the soil layers that came directly after the flood, the only pollen came from salt-tolerant plants that could survive in the arid conditions left behind in the aftermath of the natural disaster. The land was clearly no longer able to support agriculture, and the Nazca people vanished. But although the El Niño floods were dramatic, they didn't have to mark the end of a civilization, the researchers say.

"The landscape only became exposed to the catastrophic effects of that El Nino flood, once people had inadvertently crossed an ecological threshold," explains Dr Beresford-Jones. "Such thresholds or 'tipping-points' are sharply defined in these desert environments" [BBC News].