Lava can take many forms, all based on what is in it. Three volcanoes are currently showcasing different varieties of lava in spectacular fashion. 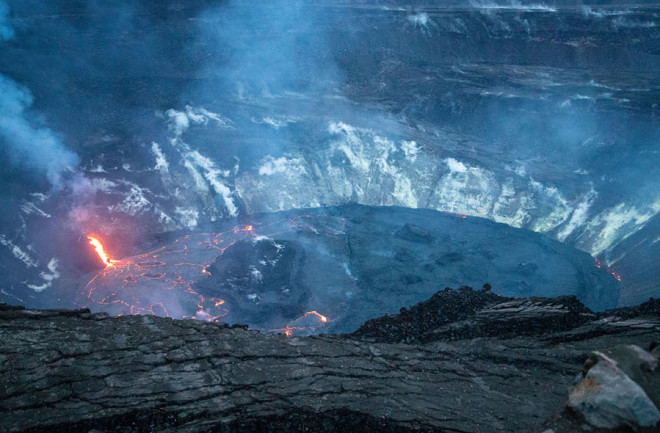 Lava is amazing. Molten rock that erupts onto the surface at thousands of degrees! Our mainly solid planet (save for the liquid outer core, but that metal, not lava) can melt but all that molten material isn't the same. Those differences in composition are what drives the different behavior of lava on the surface.

There is a (mostly) simple relationship between lava composition and behavior. The more silica (SiO2) in the lava, the "stickier" it is. This increase in viscosity means that lava goes from free-flowing to barely-flowing. Different volcanoes will erupt different compositions of lava depending on how the rock melts at the volcano and how it changes as it makes its way to the surface.

The composition isn't the only factor that changes the lava's stickiness. The hotter the lava, the runnier it is. More crystals in the lava? Stickier. More water dissolved in the lava? Runnier. More bubbles forming? Stickier. The final viscosity of the lava is a complicated combination of all these factors, but composition really drives the bus.

Right now, we have three impressive eruptions happening across the globe that really show off the styles of lava eruptions. In Hawai'i, Kīlauea has a new lava lake at its summit Halema'uma'u Crater. On Sicily, Etna has been erupting long, snaking lava flows. At the same time, La Soufrière on St. Vincent has a squat lava dome forming.

The surface of the Kilauea Lava Lake seen on January 10, 2021. The cooler, hardened surface can be seen on the right. Credit: Rob Simmon, Planet.

Since late 2020, Kīlauea has burst back to life after over two years of quiet. The summit eruption has started to fill the deep crater that formed during the 2018 Lower East Rift Zone events. In the process, a new lava lake (above) as established itself at the summit and it is being fed by a vent on the side of the lake. After about a month of eruption, the lake is now over 650 feet (200 meters) deep!

In this animated GIF (below) of the filling of the lava, you can see how fluid it is as a floating island of cooled lava moved around its surface. You can also see how the surface behinds like a layer of "plates" of lava that are created and destroyed -- a bit like a mini version of plate tectonics. The vent feeding the lava lake is near the bottom of the image.

Lava lakes require low silica lava called basalt. Now, by "low silica", we're still talking 47% of the lava is made of silica along with elements like iron, magnesium, calcium and many others. This basalt has close to the lowest viscosity and highest temperature of any lava erupting on Earth today and that allows for a lava lake to form as along as new lava is continuously fed.

On the other side of the globe, Etna on Sicily has been erupting vigorously so far this year. The eruptions have produced explosions at the summit as well as lava flows that have headed down the eastern slopes. The eruption has also spread ash on the slopes of the volcano.

Thermal image of the lava flows from Etna in Italy on January 21, 2021. The lava flows show up as bright in this image. Credit: INGV Osservatorio Etneo.

The basaltic andesite lava erupting at Etna is somewhat more silica rich than Kīlauea's. This means it is stickier and tends to produce Strombolian eruptions. These eruptions have explosions caused by large bubbles of gas rising through the pipe that leads from the source of the lava under the volcano to the surface. The lava is still runny enough to form lava flows from the vent as well and that's what is happening at Etna right now. The infrared image from Sentinel-2 shows the active flows coming down from the Southeast Crater.

Finally, we get to lava domes. These are formed by even stickier lava that erupts like squeezing toothpaste out of a tube. The lava does get far and instead just "piles up" creating a thick dome. Volcanoes like La Soufrière on St. Vincent erupt andesite (not to be confused with the previously mentioned basaltic andesite) that might have up to 65% silica. This makes it much stickier than the lava erupting at Etna or Kīlauea.

The 2020-2021 lava dome at La Soufrière on St. Vincent in the foreground, with the 1979 dome in the background. Credit: University of West Indies Seismic Research Center.

The new lava dome forming at La Soufrière is over 1,100 feet (380 meters) across and 300 feet (90 meters) thick. It started forming at the very end of 2020 and it was the first eruption at La Soufrière since 1979. Check out this video of a helicopter flight over the growing lava dome.

The domes steep sides and extreme thickness seems remarkable for andesite lava erupting when compared to the basalt lava of Kīlauea. However, the viscosity of lava goes up fast when more silica is added. The lava in the Soufriére dome might be up thousands of times stickier than the Hawaiian basalt. If you compare the far ends of the lava compositional spectrum -- basalt and rhyolite -- you find that rhyolite is a billion times more viscous! Some rhyolite lava domes and coulees (kind of like a hybrid of a dome and flow) can be hundreds of feet thick.

Most eruptions of lava to form these features are relatively passive. When you're thinking about volcanic hazards, lava flows are bad for buildings and infrastructure but not people. All of this difference in stickiness is what drives the different types of lava lakes, flows and domes.