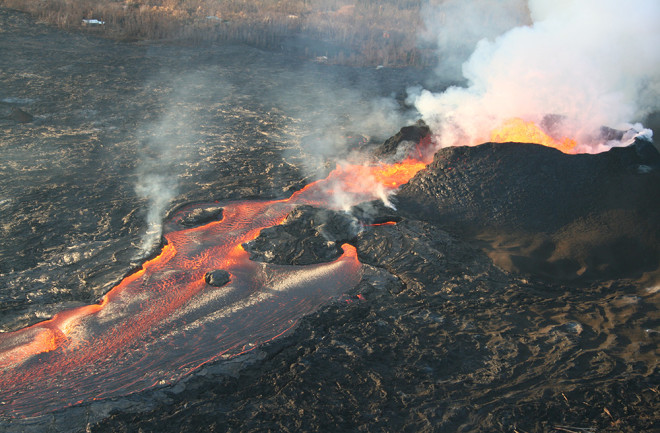 The 2018 eruption at Kīlauea was the largest in the United States since 1980. Between 0.8 and one cubic kilometers of lava poured out onto the surface of the Big Island of Hawai’i over the course of a few months, leading to massive destruction of property and infrastructure, but happily no loss of life. Much of that can be pinned on the excellent work done by the US Geological Survey and the Emergency Management teams in Hawai’i.

Although it has only been a few months since the eruption ceased, a team of USGS and other geologists have released a new paper in Science that discusses the events surround the remarkable eruption. The paper presents a clear description of all the events that happened from March to September, but the real meat of the paper deals with beginning to understand why the eruption happened and what the future might hold.

The collapsing summit of Kīlauea seen in June 2018. (Credit: USGS/HVO)

A few facts about the eruption to get out of the way first:

The collapse of the summit caldera of Kilauea during the 2018 eruption. (From Neal et al., 2018, Science)

The short: it was big! No U.S. eruption since Mount St. Helens in 1980 comes close to the volume erupted at Kīlauea this year. Globally, the 2014-15 eruption of Barðarbunga in Iceland beat Kīlauea by ~0.4 cubic kilometers while the eruption of Miyakejima (Japan) in 2000 and Tolbalchik (Russia) in 2012 both erupted ~0.6 cubic kilometers. Even if we look at more explosive eruptions, the largest (so far) in the 21st century was Puyehue-Cordón Caulle on the Chile-Argentina border, and that was only ~0.7 km cubic kilometers. So, good on you, Kīlauea!

The new study by Christina Neal and many others in Science speculates some on the potential causes of the eruption and their main conclusion is that, ultimately, the trigger was “enigmatic”. They suggest that maybe some blockage or barrier between the volcano’s summit and its long limb on the Lower East Rift Zone was ruptured, allowing magma to travel down the long pathway to Leilani Estates (see below). This might have been caused by the side of the volcano sliding slowly over the past few decades or the M6.9 earthquake that occurred on the slopes of the volcano on May 4.

The volcano was already full of magma before the eruption. The summit lava lake was overflowing just prior to the start of the LERZ eruption, so maybe there was enough pressure building in the volcano that, combined with some slip or shaking from the earthquake, the magma could suddenly make it further down the rift zone than it had since 1960. Think of it like ice blocking a pipe that then breaks loose, but the pipe bursts further down its path.

The shallowest reservoir of magma underneath Kīlauea’s summit may have been close to totally drained during the eruption. Based on the history at Kīlauea, after the last summit collapse like this in 1924, it might be years to nearly two decades before eruption starts up again on the volcano. However, the void left by the eruption in the upper parts of the volcano could also promote magma to rise into that space, leading to new eruption soon. We’ve never been able to watch for the signs of the recovery of such an eruption at Kīlauea, so this is all new and exciting for volcanologists.

In the end, the 2018 eruption at Kīlauea will likely be remembered by the public for the destruction it caused to the communities on the Lower East Rift Zone — and rightly so. Questions about where people should be allowed to build on an active volcano are going to go on for years … or at least until the memories of this eruption begin to fade. However, the new side of the volcano we got a glimpse of will allow us to not only get to know Kīlauea better, but other volcanoes like it in places like Iceland. It was quite a year for what was the most active volcano on the planet.