Kīlauea was next to silent much of the year, but ended 2020 with a new eruption at the summit. 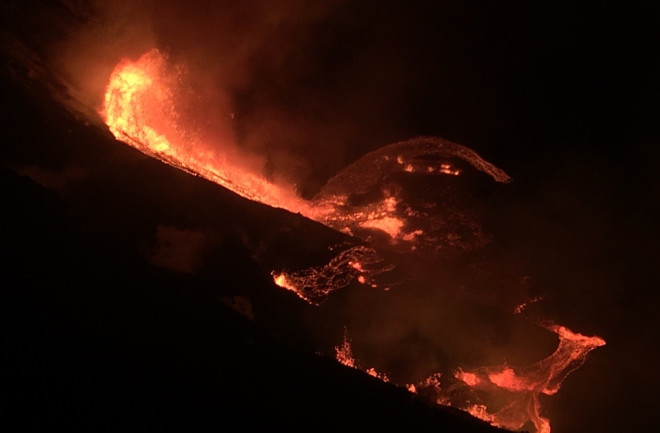 Lava flows and fountains in the summit crater on December 21, 2020. (Credit: USGS/HVO)

It had been over two years since Kīlauea on Hawaii last erupted. For a volcano that had been erupting continuously for almost 35 years prior to that, two years of quiet is a long time. The summit Halema'uma'u Crater collapsed during the massive 2018 eruption at the lower east rift zone and the bottom of that pit had filled with a small lake. However, in a few fitful minutes early in the morning of December 21, that lake was changed from a lake of water to a lake of lava.

Earlier last week, the scientists at the Hawaiian Volcano Observatory (HVO) had noted that the summit area was inflating and feeling numerous small earthquakes. This is something that hadn't happened since the end of the 2018 eruption. These were all signs that magma was intruding into the summit area of the volcano. Although they couldn't say that an eruption was going to happen, it was enough activity to at least let that thought creep into your head if you were monitoring the volcano's rumbling.

Sure enough, late in the evening on December 20, new fissures opened on the edges of the collapsed pit in the Halema'uma'u Crater. As the eruption continued, lava cascaded from these openings into the small lake, evaporating it rapidly and eventually forming a new lava lake at the summit. Whatever magma had intruded at the summit now reached the surface in a spectacular fashion, with lava fountains reaching about 165 feet high. It appears that a magnitude 4.4 earthquake that happened during the night may have been a harbinger of the eruption, though it is always hard to tell which is the chicken and the egg in these early days.

As of Monday, December 21, HVO has a red/warning status for the volcano. With the abundant water in the crater and now lava, there is always the threat of explosions. However, so far we have just seen an impressive steam plume and lava fountains in the summit crater. How long this will last is anyone's guess at this point, but it marks the beginning of a new chapter of eruption at Kīlauea.

A view of the December 2020 eruption at Kīlauea in Hawaii showing the vents for the lava as well as the growing lava lake. Credit: Planet, used by permission.

The eruption continues at the summit of Kīlauea today. The HVO webcams pointed into the Halema'uma'u Crater show the growing lava lake (below). It appears that one vent is still above the level of the lava lake while the other might no longer be active or is below the lake level.

Early estimates of sulfur dioxide emitted during this eruption are similar to the start of the 2018 eruption according to Dr. Simon Carn (MTU).

You can see some spectacular footage of the eruption taken by HVO staff. Planet (above) also released this great image of the eruption showing the vents and growing lava lake (with a black cooled skin on it) as well as the steam-and-gas plume. The Jaggar Museum Overlook, at the edge of the summit crater, is closed for now as the eruption continues.

And, by the way, it is a great coincidence that this commenced on the winter solstice during the great Jupiter-Saturn conjunction ... the universe is crazy that way.