Just Say No To Feathered Tyrannosaurs

Feathered tyrannosaurs? No, thank you. These dinosaurs didn't need no stinkin' feathers, and a new study backs me up on that. 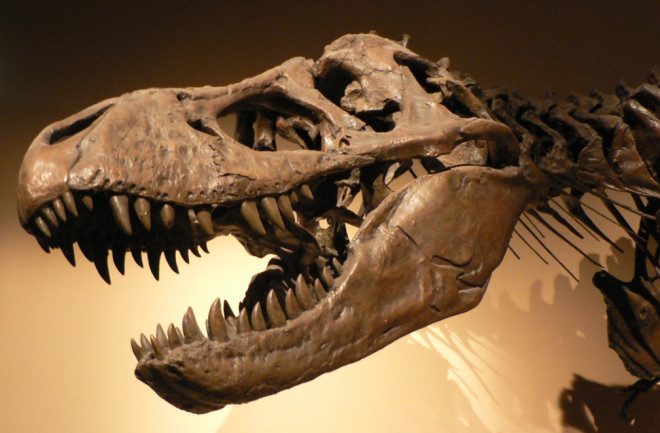 It’s a good day here at Dead Things: A new study provides a nice big nail in the coffin of the notion that T. rex and its kin ran around all kitted out in feathers. Lovers of old-school, scaly dinosaur renderings, rejoice!

Maybe I’m showing my age, but when I was learning about dinosaurs they were tail-dragging, vaguely reptilian, monochromatic lugs. You had your gray dinosaur, your green dinosaur and usually a brownish-tan one. Maybe some blobby dots or stripes, if the book you were reading was a bit out there.

Those 20th century notions have gone extinct as science has advanced — paleontologists recently figured out, for example, that at least some dinosaurs shared the same coloration pattern as Great White sharks.

But with the discovery that birds descended from one branch of the dinosaur family tree, and the unearthing of the first feathered dinosaurs a couple decades ago, some people — researchers, artists and ordinary dino-philes — have taken the whole BigBirdosaurus thing Way. Too. Far.

I am still emotionally scarred by a Pinterest post I saw of T. rex flaunting the plumage of a bald eagle. No. Just no.

Billed as a “modern scientific reconstruction of Tyrannosaurus rex,” this 2016 rendering already needs an update thanks to today’s study. (Credit: RJPalmerArt/Wikimedia Commons)

So it is with great delight that I share with you a new study that strips the fanciful feathers off tyrannosaurs — including the most famous of them all, T. rex — and concludes that these mighty predators had scaly skin after all.

It’s All About The -Id

But wait, what about Yutyrannus? You may remember that, a few years back, paleontologists unearthed a trio of Yutyrannus, a very large (more than 20 feet long) and very feathered tyrannosauroid from China’s Early Cretaceous (about 125 million years ago to be more precise). Yutyrannus is the largest known feathered animal of all time, which is cool, I suppose, if you’re into that sort of thing, but I blame its discovery for really kicking the feathered T. rex folly into high gear.

Yutyrannus was a big deal because the other feathered dinosaurs in the fossil record have been significantly smaller.

The thinking was (and still is) that feathers first evolved in dinosaurs not for flight or showy peacockery displays but for insulation. Smaller animals don’t generate as much body heat, so they need more insulation — in this case, more feathers. Bigger animals generate more body heat and would be more concerned with shedding it to avoid overheating.

So finding the great feathery beast that is Yutyrannus was a bit of shock. (Technically, Yutyrannus had a coat of primitive, filamentous feathers that would have appeared almost fur-like, rather than the advanced, much more structured feathers of modern birds.)

Although paleontologists have never found a T. rex with evidence of feathers, once Yut turned up in all its Early Cretaceous feathered glory, it was logical to think that later tyrannosaurs, T. rex of the Late Cretaceous included, might also be rocking the fluffy stuff. Feathers are an advanced, or derived trait, and derived traits, once established, usually (but not always) stick with an evolutionary lineage.

There is a big difference between a tyrannosauroid like Yutyrannus and a tyrannosaurid like T. rex. A difference of several million years of evolution, to put a finer point on it. Which brings us to today’s paper.

Take It Off, Take It All Off

Think of “-oids” as  something like but not quite: humans versus humanoids in every cheesy sci-fi show ever, or hominins (us, and our immediate evolutionary kin) and hominoids, which include all the hominins plus apes, chimpanzees and orangutans.

There is quite a difference in furriness between us and our closest living relatives, bonobos and chimps, and we’ve only been separated from them, genetically speaking, for a few million years. Consider the amount of diversity possible over tens of millions of years.

Writing today in Royal Society Journal Biology Letters, researchers compiled the first ever detailed analysis of tyrannosaur skin from multiple specimens, as well as a new dataset tracking tyrannosaur body size and type of skin covering from existing specimens spanning much of their evolutionary history.

The team concluded that, while at least some of the early tyrannosauroids (like Yutyrannus) were feathered, by the time tyrannosaurids had evolved more than 20 million years later, they appear to have lost all the fuzzy stuff.

The big question, still to be answered definitively, is why later tyrannosaurids lost the fine feathers of their distant, more primitive tyrannosauroid ancestors.

(Note: we can’t say tyrannosauroid A is the direct ancestor of tyrannosaurid B because the fossil record is just not that complete, but it’s similar to looking at modern humans and then back at, say, the australopiths such as Lucy and South Africa’s Little Foot. They may or may not be our great-grandparents, but they are at least great-aunts and uncles, and represent the general course of evolution that led to our species.)

Some more nope-a-saurus. Back to the drawing board, fella. (Credit Matt Martyniuk/Wikimedia Commons)

One of the co-authors of today’s study is University of Alberta paleontologist Scott Persons, a long-time friend of Dead Things and a great explainer who makes my job easy. So tell us, Scott, what’s going on with the feather loss as tyrannosaurs evolved — were they just too embarrassed to be so fuzzy?

“It seems like a step ‘backwards,’ but evolution doesn’t work with any kind of master plan in mind,” says Persons. “For whatever reason, T. rex and its close relatives were better off without a feather covering. It seems likely that the explanation has to do with needing to readily lose body heat, rather than retain it. If you are a big animal running around in the direct sunlight of an open tropical flood plain, you are probably better off ditching your down coat.”

While Yutyrannus was as big as many of the later, feather-free tyrannosaurs, it lived in a cooler climate and what may have been a forested, shady environment, which might explain why it kept its coat on.

“Many modern big terrestrial mammals have secondarily lost their extensive covering of hair — think elephants, rhinos, hippos, and Cape buffalo,” Persons explains. “But there are exceptions. Modern Asian rhinos and elephants have more hair than their African cousins, because they live in shady forests with less direct exposure to the sun.”

Body plan may have also been a factor. While we can laugh all we like at the tiny forelimbs of tyrannosaurs, the later ones like T. rex were leggy beasts in the back end, which suggests they were adapted to run — which in turn implies a fairly high activity level and the generation of more body heat. In comparison, Yutyrannus may have been more of a couch potato in need of comfy sweats and a hoodie.

“It does have relatively shorter legs, which indicates less running ability,” Persons says of Yutyrannus. “By engaging in less vigorous or frequent athletic activities it might have typically generated less body heat and avoided putting itself in situations where it needed a rapid cooldown. Or it might have evolved some compensating method of heat loss that we don’t have any clue about based on the fossil record.”

Show Me Some Skin

The team’s detailed analysis of existing specimens of later tyrannosaur skin revealed that it resembles that of duckbilled dinosaurs, which are not closely related. There are numerous fossilized skin samples sitting in museums and identified as belonging to duckbilled dinosaurs, but it may be time for a rethink on that, too.

“I bet you that at least a few tyrannosaur skin impressions had been found before but got misidentified as those of a duckbill,” says Persons.

See this? This is a hunk of real fossilized tyrannosaur skin and it’s scaly, with no sign that it was ever covered in feathers. As it should be. (Credit: Amanda Kelley)

Persons also noted that just because the team ruled out fully-feathered adult tyrannosaurids, it doesn’t mean their babies weren’t covered in downy feathers, which would have provided heat retention, crucial for small, young animals. We just don’t have the fossils yet to know for sure. And even the grown-ups may have been sporting some feathery stuff. Just a little.

“I would wager they still probably had some feathers, maybe a few on their faces, acting like eyelashes or short whiskers,” Persons says. “And it is conceivable that they had localized patches of feathers or even feather crests. But not extensive feather coverings.”

Okay, I can live with that … Wait. Now I have the mental image of T. rex batting its lashes at me. Shudder.

That’s better. Nice and feather-free, just the way I like my T. rex. But about that tail-dragging … (Credit: Universal Pictures/Amblin Entertainment)
1 free article left
Want More? Get unlimited access for as low as $1.99/month
Subscribe