Twenty-five million years ago a bird with a 24-foot wingspan roamed the skies. 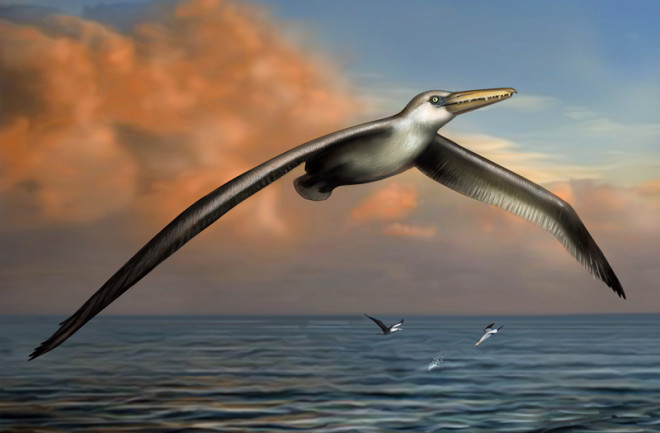 What did the extinct bird Pelagornis sandersi eat? With a wingspan up to 24 feet and jaws lined with spiky, toothy projections, anything it wanted.

The massive seabird, known from a 25-million-year-old fossil excavated in South Carolina, has the largest wingspan of any bird ever found. It edges out the extinct South American condor-like Argentavis magnificens (with an estimated wingspan of 20 feet), and it dwarfs the largest living airborne bird, the wandering albatross (11-foot wingspan).

Because the fossil was in excellent condition, paleontologist Daniel Ksepka had enough data to re-create the bird’s flight style through computer modeling.

The results, published in the Proceedings of the National Academy of Sciences, suggest P. sandersi was an efficient glider that probably used cresting waves for an extra boost of energy at takeoff. The models also indicate that the bird was capable of short periods of powered flight (which is also called flapping flight because it requires significantly more energy from the bird than soaring or gliding).

“P. sandersi’s flight style was similar to that of the albatross,” says Ksepka, curator of science at the Bruce Museum in Greenwich, Conn., but “these magnificently strange things are actually related to chickens.” Although, he adds, “I can say they almost certainly did not taste like chicken.” Sorry, wings fans.