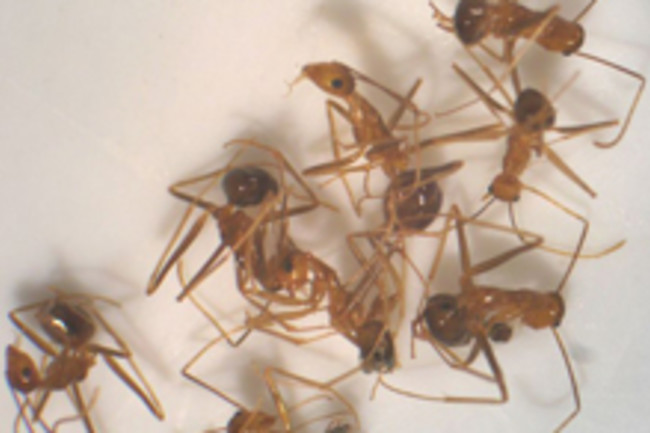 At some point in the first half of the 20th century, a couple of ants hitched a ride on a boat and ended up on Christmas Island, an Australian territory in the Indian Ocean. And so began the rampage of the "yellow crazy ants," creatures that have been named one of the top 100 most invasive species in the world. On Christmas Island, scientists have now

declared an “invasional meltdown” of the original ecosystem [Science News].

The latest evidence: The ants are so plentiful and bothersome that they're preventing birds from feeding on berries, and the birds are therefore failing to disperse seeds around the island. Researcher Dennis O'Dowd explains that

the long-legged yellowish ants earned the named "crazy" because when they are disturbed they run around frenetically. O'Dowd says crazy ants form large super-colonies and cover ground and vegetation in densities of around 1000 ants per square metre. "These ants are three-dimensional foragers," he says [ABC Science].

The ants can thickly cover the forest floor and swarm up vines and plants.

In ant-dense zones, O’Dowd sees birds stomp and ruffle their feathers as if maddened by crawling ants [Science News].

So for his study, published in Biology Letters, he tested whether the ants' presence was interfering with native birds' feeding habits. His team made fake berries out of non-toxic modeling clay and secured them next to real berries; later they looked at the impressions on the fake berries made by the birds' pecking beaks. They found that in ant-free areas, the fake fruit received twice as many pecks as the fruit in areas swarming with ants. Placing ant traps around the base of a plant also increased the number of pecks. These findings suggest that the ants are meddling with both the island's fauna and flora: the birds' diet and nutrition appear to be changing, and the lack of seed dispersal may alter the distribution of plants. But this is only the latest example of how the crazy ants are reshaping the Christmas Island ecosystem. Previous studies have shown that the ants are using formic acid to kill the island's red land crabs, whose mass migration to the sea has been called one of the wonders of the natural world. The land crab is also

a "keystone" species, that helps recycle nutrients and keep the rainforest floor from getting too crowded. Previous bating campaigns have suppressed ant numbers by 94%, but the ants have returned with vengeance [ABC Science].