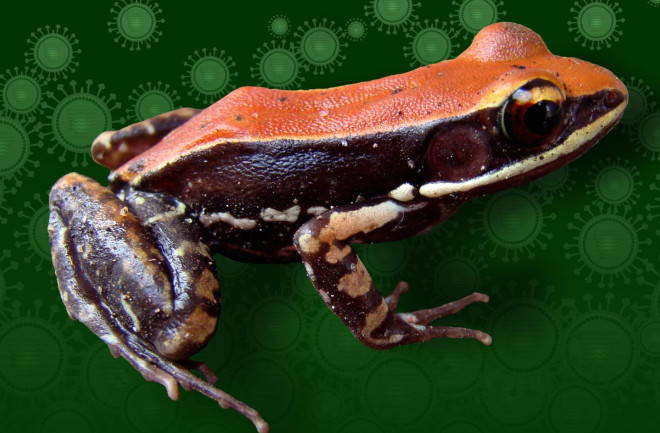 The South Indian frog Hydrophylax bahuvistara. A peptide secreted from its skin fights the influenza virus. (Credit: Sanil George and Jessica Shartouny) A peptide secreted by a species of Indian frog can destroy variants of the influenza virus. Frogs, with little defensive weaponry to rely on, have armed themselves with a chemical arsenal that gets leached out through their skins. In some frogs, this takes the form of deadly poisons; in others, the chemicals have been known to possess psychoactive properties. Hydrophylax bahuvistara, a species of fungoid frog found in India, secretes a substance that protects against viruses. Researchers studying the frogs introduced their slimy secretions — obtained via a mild electric shock — to colonies of the H1 variant of the influenza virus. The compound stopped the influenza in its tracks, the work of a specialized peptide produced by H. bahuvistara that is able to destroy the virus. The researchers named the compound urumin after a kind of wicked whip-sword found in the region, and published their findings Tuesday in the journal Immunity. They also gave a concentrated dose of the peptide to mice before infecting them with a deadly dose of influenza. Around 70 percent of the mice survived, an indication that urumin might work in humans, as well. Tests with human blood cells in the lab also indicated that it doesn't appear to be toxic to us at functional doses. Urumin is welcome news for doctors and researchers seeking alternative methods to combat viruses. Vaccines can be effective, but supplies would likely be insufficient in the face of a pandemic, and scientists don't always match their yearly update of the flu vaccine to the most prevalent strain. Looking to mechanisms already deployed in nature offers a tried-and-true method of combating disease. There are some difficulties in mass-producing peptides of this sort, because enzymes in our bodies often break them down. The researchers hope to conduct further research in an attempt to create a version of urumin that can withstand our bodies' defenses, in addition to widening their search to include other species and other peptides that may be effective against different diseases.