In Borneo, Bats and Plants Form a Peculiar Poop Partnership 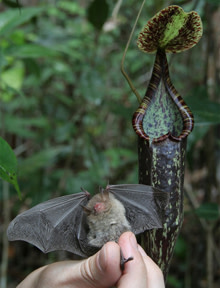 Some plants want ample water and sunshine. The plant Nepenthes rafflesiana, however, desires the droppings of Hardwicke's woolly bats. The carnivorous plant and the key-sized tiny bat live on the Indonesian island of Borneo, where their unusual arrangement has blossomed. Scientists who placed trackers on the backs of the bats found that they nap away their days nestled in the pitcher of this pitcher plant, and they use it as their personal commode. That's just fine for the pitcher plant, which doesn't trap as many bugs as its relatives, but makes up for it by deriving one-third of its nutrients from bat excrement.

"It's totally unexpected," said Ulmar Grafe, an associate professor at the Universiti Brunei Darussalam who led the study. "There's a lot of animal-plant mutualisms, but this one is where the animal gives a nutrient to a plant. Usually it's the other way around." [Reuters]

You might think it'd be dangerous for bats to lay around in a plant's pitcher, where they could plummet into the gooey nectar the plant uses to trap and eat insects. But, in fact, the pitcher is shaped just right so that the bats can't fall through. Says Grafe:

"The pitcher plant benefits from attracting the bat because the bats defecate into the pitcher, using it as a toilet if you will," he explains. [BBC News] 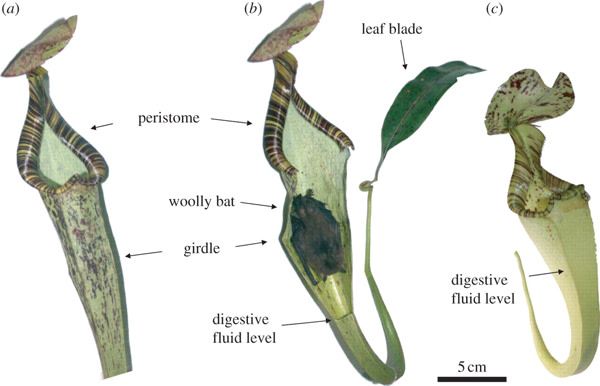 The bats, meanwhile, get a nice place to rest that's elevated and free of blood-sucking parasites. Everybody wins. This isn't the first toilet-plant story to come out of Borneo. Last year DISCOVER covered the case of the tree shews

that also use pitcher plants as their restroom-on-the-go, though they didn't live in the plants the way Hardwicke's woolly bats do. And, Grafe says, the geography of biodiversity of the island mean there could be more bizarre plant-animal agreements out there waiting to be found.

"Many pitcher plants grow in remote mountainous areas," Grafe said. "Borneo, the world's third largest island, has the highest species richness of any region and most species have not been investigated in much detail." [Discovery News]

appears in Biology Letters. Related Content: 80beats: Real-Life Killer Tomatoes? Carnivorous Plants May Be All Around Us

DISCOVER: The Plants That Eat Animals