Check out some of the latest dramatic imagery of the Hawaiian volcano's continuing eruption. 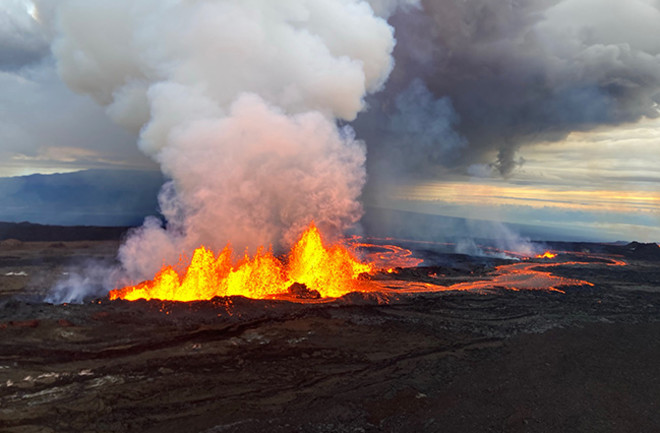 Just a few days ago, our planet's largest active volcano stirred to life for the first time in nearly 40 years. Since then, the erupting fissures high atop Mauna Loa in Hawai'i have been propelling lava fountains as high as 13-story buildings, and driving rivers of molten rock as far as eight miles down the mountainside.

The natural spectacle, which began late on Nov. 27, has been captured in breathtaking photos and videos taken by experts from the U.S. Geological Survey, as well as by satellites orbiting high overhead. What follows is a sampling of this imagery.

The aerial view above shows erupting fountains supplying lava to a flow that's advancing north of the rift zone.

Here's a still photo captured during the same flight:

Lava flows on Mauna Loa's Northeast Rift Zone photographed from the air at about 9:30 a.m. on Nov. 28. The view is to the northwest. (Credit: USGS photo by K. Lynn)

During an aerial reconnaissance mission early in the evening of Nov. 28, rivers of lava glowed against a background of dark rock:

This aerial photo captured over Mauna Loa's Northeast Rift Zone on November 28, 2022, shows lava flows and fountains erupting from a line of fissure vents at an elevation above 10,000 feet on the volcano. (Credit: Courtesy of Civil Air Patrol via USGS)

On the same day, the Sentinel-2 satellite orbiting nearly 500 miles above captured this view:

The image, which covers an area a little less than 20 miles wide, consists of a mix of enhanced natural color and infrared data, processed by remote-sensing expert Pierre Markuse. (Check out more of Pierre's spectacular remote sensing imagery here.)

At the start of the animation (which cycles several times), a plume of ash and gas flows toward the northeast from the Big Island of Hawaii. In the false color view, generated from infrared data, the bright green color is indicative of copious sulfur dioxide gas.

Sulfur dioxide pouring from the Mauna Loa eruption was detected in the atmosphere on Nov. 28, 2022 by the Sentinel-5P satellite. (Credit: NASA Earth Observatory)

The map above shows where the European Space Agency’s Sentinel-5P satellite detected sulfur dioxide in the middle troposphere with its Tropospheric Monitoring Instrument, or TROPOMI, sensor.

“The eruption is effusive rather than explosive, although its initial phase overnight on November 28 was quite energetic and injected some sulfur dioxide to high altitudes, possibly all the way to the tropopause,” said Simon Carn, a volcanologist at Michigan Tech, quoted in a piece published by NASA's Earth Observatory. “That is unusual for this type of eruption.”

NASA scientists estimate that sulfur dioxide gas amounting to about 200,000 tons (or 0.2 trillion grams) poured into the atmosphere on Nov. 28 alone. By comparison, the previous eruption of Mauna Loa, which lasted 22 days starting on March 25, 1984, lofted about 1.3 million tons (1.2 Tg) of SO2 into the atmosphere.

A Hawaiian Volcano Observatory geologist documents an ‘a‘ā lava flow from the Northeast Rift Zone of Mauna Loa on the morning of November 29, 2022. (Credit: USGS image by F. Trusdell.)

Geologists from the Hawaiian Volcano Observatory got close up and personal with this lava flow on the morning of Nov. 29. A‘ā flows like this have a rough, rubbly surface composed of broken lava blocks called clinkers.

As seen in the image, those clinkers cover a glowing core of molten lava. "As pasty lava in the core travels downslope, the clinkers are carried along at the surface," according to the USGS. "At the leading edge of an ‘a‘ā flow, however, these cooled fragments tumble down the steep front and are buried by the advancing flow. This produces a layer of lava fragments both at the bottom and top of an ‘a‘ā flow."

You can see how this plays out here:

Last but not least, here's a broader view, captured from a helicopter:

This view from a helicopter on the afternoon of November 29 shows the advancing flow front from the Mauna Loa eruption. (Credit: USGS image by L. Gallant.)

The photo shows the front of a lava flow advancing to the north from a vent high up on the Northeast Rift Zone of the volcano.

According to an update from the Hawaiian Volcano Observatory issued on the morning of Nov. 30, the eruption is continuing, with two active fissures feeding lava flows downslope. Monitoring equipment is detecting a high rate of seismic tremors in the area of active fissures. This indicates that magma is still welling up from below and is likely to continue feeding the eruption until those tremors settle down.