Thousands of cetacean carcasses wash up on shore each year. Recent research argues that coastal management practices should help preserve the many ecological benefits they can bring. 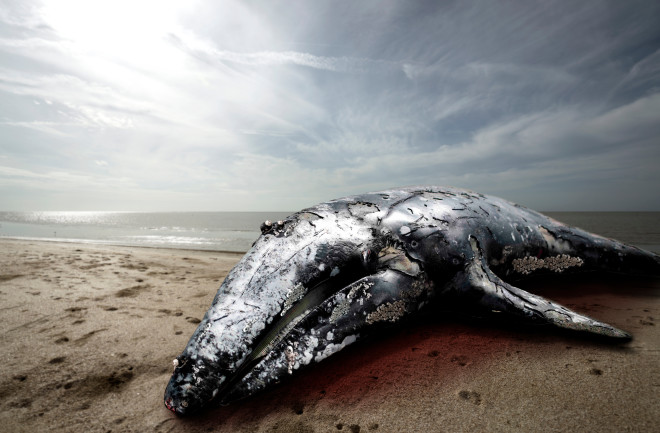 Every year, thousands of whales, dolphins and porpoises wash up on shore. Although even healthy cetaceans beach themselves occasionally, many that end up ashore are either sick or already dead. For centuries, the carcasses from these beachings, also known as strandings, have provided food, tools and other services to humans.

Our own interactions with these carcasses, however, are just one part of the story — they also provide a host of services to marine life in coastal areas. But human interference, from hunting during the whaling era to more modern disposal practices, have deeply altered the ecosystem services these strandings would otherwise provide, according to a study published in the journal Ecosystem Services in April. The study authors argue that a better understanding of the vital role that cetacean carcasses play — and incorporating that knowledge into coastal management strategies — could help preserve their ecological benefits.

Cetaceans include over 80 species of whales, dolphins and porpoises. Throughout history, human beings have exploited their washed up carcasses for food and tools. Researchers have suggested that strandings provided both a source of food and a ready supply of bone to be crafted into tools as early as the Paleolithic. Later civilizations around the world exploited carcasses for similar purposes. For the Māori of New Zealand, whale strandings were a “symbol of abundance and richness,” while the Fuegians of Patagonia described them as a “great gift of nature.”

In Medieval England, whale meat harvested from stranded animals became a luxury destined for only the highest classes of society. Designated as a “royal fish”, the meat was imbued with privilege. Later, around the 18th century, cetacean carcasses became an object of scientific inquiry. It was only at this time that scientific Latin names were given to the creatures, says Martina Quaggiotto, an ecologist at the University of Stirling and lead author of the study. By the 20th century, their bones began to fill museums around the globe.

Today, cetacean strandings continue to provide essential fodder for scientific learning. They can act as indicators of ecosystem and population health, for example, and forensic analysis of individual specimens can provide insights into what caused their demise, potentially aiding conservation efforts. It's for this reason that they've have also been proposed as a “sentinel species” to enable researchers to monitor climate change in marine environments.

In the future, says Quaggiotto, ecotourism of stranded animals could provide other opportunities, too. Strandings could help people connect with nature and offer important education services, in turn contributing to conservation efforts and public knowledge of the oceans. “I just think that with more education, more educational opportunities, the more people are knowledgeable and understanding of the situation, the more we can push for positive change,” she adds.

When whales sink at sea — known as whale falls — their remains cause a boom in nutrients, feeding ocean-dwelling organisms and scavengers for weeks. Decomposing carcasses can enrich the ocean floor for up to a year. Beyond that, they can also play an important role in carbon sequestration. Floating carcasses, meanwhile, are ripe for the picking for various shark species.

On the coast, carcasses are just as valuable to terrestrial life. Endangered polar bears, for example, are known to gorge on stranded cetaceans. In warmer climates, scavengers like brown bears, wolves, foxes and jackals also make their way to the shore to feast on dead marine mammals. Decomposing carcasses can also enrich coastal areas with nutrients, completing a cycle of nature. “You have vertebrates, invertebrates and microbes that enhance the decomposition as well,” Quaggiotto says. “There is a very complex relationship between all these characters and how they feed on the carcass.”

Disrupting this cycle can come with consequences. Quaggiotto and her colleagues point to the threatened Andean condor (Vulture gryphus) as a prime example. As a result of human activity and the overhunting of marine wildlife, whale populations in the Pacific have plummeted, greatly reducing the number of strandings. A study published in 2018 showed that condors nesting on the Pacific coast of Patagonia changed their feeding patterns in response, opting for a more terrestrial diet. Some now travel more than 50 miles from their nesting sites to find food on land, traversing entire mountain reaches in the process.

When carcasses wash ashore, or marine mammals die as a result of strandings, regulations on what to do with them can vary drastically. Quaggiotto and her colleagues looked at rules in 23 countries and regions and found a patchwork of different regulations — or none at all, in some cases. Human health and safety considerations are a prime consideration when strandings occur near populated areas, as well as concerns around the unsightliness and smell of beached animals. Some ways to deal with carcasses include dumping them in a landfill, incineration, burial or simply letting them decompose naturally.

Quaggiotto and her research team argue that some of these current practices are not just costly; they also limit the number of ecosystem services these carcasses would otherwise provide if left in place. Allowing carcasses to decompose where they lie is the preferred option when aiming to maximize ecosystem benefits, the researchers write, as long as legal, health and public safety needs are fulfilled.

When natural decomposition is not possible, burying carcasses on beaches, for example, could limit disturbance and enable nutrients to flow, while smaller carcasses could be moved to remote parts of the coast or protected areas. Burying carcasses is one example where safety considerations have to be considered, given real concerns around the attraction of sharks to coastal areas. “Once we realize what the ecosystem services are around these carcasses, we realize we’re not doing exactly what we could do in order to preserve them,” Quaggiotto says. “We have this idea that the beaches need to be clean [and] pristine, and this is a human point of view."

Still, Quaggiotto notes that the scientists are not advocating for the carcasses to be left on the beach every time a stranding occurs. "It’s about finding a compromise and trying to, as much as we can, work with nature, rather than against nature.”