Ice Ages: What Causes the Earth to Freeze Over Every Few Million Years?

At least five major ice ages have been documented in Earth's history. And guess what? You're living in an ice age right now. But don’t expect the planet to chill over from pole to pole. 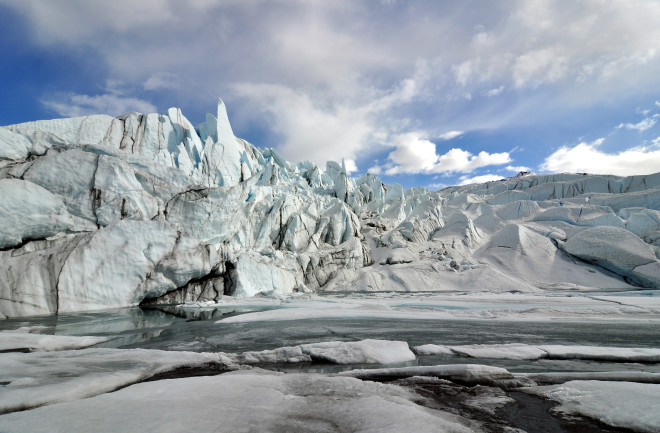 Periodically, global temperatures drop, ice sheets form at the poles, then the ice creeps down to cover the continents. We call these ice ages. There have been five major ice ages in Earth’s 4.5-billion-year history. The last one began about 2.5 to 3 million years ago. And get this: it’s still going on. That’s right, we’re living in an Ice Age.

That’s hard to believe in these days of dangerously increasing global temperatures, but ice ages aren’t uniformly hard-frozen. Within these major ice ages there are warmer, shorter-term periods, called interglacials, when the ice sheets retreat, and some, or even most, of the planet is free of ice. (By contrast, the periods of time when glaciers advance are called, fittingly, glacials.) Interglacials can last tens of thousands of years. We’re in an interglacial now — this one began around 10,000 years ago. That’s why we have ice caps at the poles while temperatures are more or less comfortable (for humans) on most of the planet.

Earth goes about its business in a pretty regular way, spinning on its axis and looping around and around the sun. But there are some variations in the pattern. Over time, the tilt of the Earth, its orbit, and its wobble change a bit. These very minor (and regular) adjustments in the angle of the Earth relative to the sun affects the amount of solar radiation, or insolation, that reaches Earth. “Even though the tilt changes by only one degree or two, that’s enough to change the angle at which the sun's energy hits,” explains Elizabeth Thomas, a paleoclimatologist at the University at Buffalo. And of course, less energy from the sun means colder temperatures.

During the colder winters, snow falls on the land. If the summers are cool enough, the snow lasts until the next winter. Eventually there will be more and more snow building up, and that will pack down into a glacier. The glacier will continue to grow until it’s a continent-sized ice sheet. Meanwhile, the Earth’s orbit changes enough from time to time to cause the ice sheets to retreat, a little or a lot, creating interglacial periods.

It’s not all about the Earth's exposure to the sun, though. Ocean currents and carbon dioxide, or CO2, play a role, too. Carbon dioxide levels change more or less in step with changes in ice volumes. “We think that's because ocean circulation slows down during these glacial periods, and that causes a lot of the CO2 that would be in the atmosphere to be trapped down in the deep ocean,” Thomas says.

There’s a reason we use the word “glacial” to mean very, very slow. This whole process takes thousands and thousands of years. Warming up, however, happens much faster. Changes in ocean currents are one of the reasons ice melts faster than it builds up. “If Earth’s orbit moves back into a configuration where the planet is receiving a lot of energy, the oceans start heating up, and the edges of the ice sheets begin to melt," explains Thomas. "When the ocean circulation starts turning on again, that burps up a lot of CO2.”

And as we’ve all learned, CO2 is a very efficient greenhouse gas. The increase in CO2 heats up the atmosphere so the ice sheets start getting melted from above, as well. As the ice melts, big chunks of ice sheets start to break off — a process called calving — which makes them melt even faster. “They can disappear in, geologically speaking, the blink of an eye,” says Thomas. “It takes very little time to completely destroy an ice sheet.” All of this sounds frighteningly pertinent in today’s rapidly heating world.

What was that again about being in an ice age? If we were right on schedule, we’d be near the end of this interglacial and headed into another glacial period. That’s not happening, of course. Instead, we seem to be heading into a climate like that of the Eocene Epoch, when palm trees grew in Alaska and crocodiles swam in the Arctic.

But has global warming saved us from an opposite but equally disastrous fate? If we didn’t have global warming, would we be entering an ice age that’s potentially just as dangerous? Well, maybe — but not nearly so suddenly. “The advance is so slow that the next ten generations would hardly notice it,” says Thomas.

On the other hand, if we hadn’t been in an ice age when humans started cranking up the heat, things would already be much, much worse. So we do have an ice age to thank for that.