Human Races May Have Biological Meaning, But Races Mean Nothing About Humanity

Razib Khan’s degrees are in biochemistry and biology. He has blogged about genetics since 2002 (see his Discover Blog, Gene Expression), previously worked in software development, is an Unz Foundation Junior Fellow and lives in the western US. He loves habaneros. 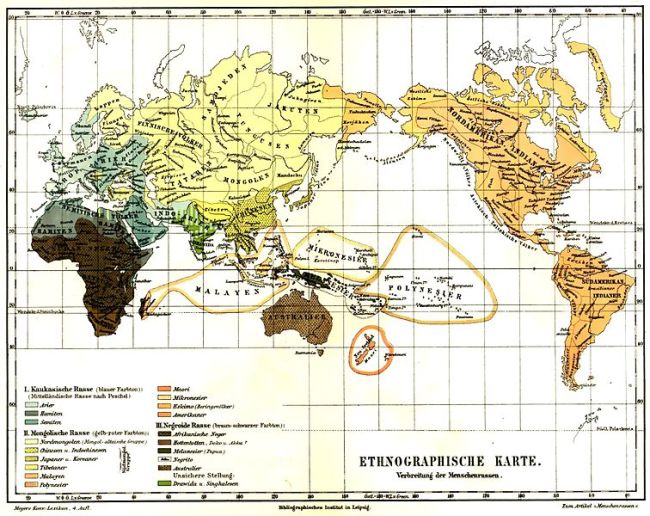 ...At some future period, not very distant as measured by centuries, the civilized races of man will almost certainly exterminate and replace throughout the world the savage races. At the same time the anthropomorphous apes, as Prof. Schaaffhause has remarked, will no doubt be exterminated. The break will then be rendered wider, for it will intervene between man in a more civilized state, as we may hope, than the Caucasian and some ape as low as a baboon, instead of as at present between the negro or Australian and the gorilla.

- The descent of man, and selection in relation to sex, Volume 1 - by Charles Darwin The above quote is not to vilify Charles Darwin. On the contrary, I believe Darwin was a scientific hero whose work is the foundation of modern biology. Nevertheless, he was a man of his age. Despite the fact that Darwin was a political liberal from a family of liberals, with pristine credentials in progressive social movements of his day, such as the anti-slavery campaigns, it is clear that he had Victorian biases nonetheless; some of the passages in The descent of man clearly come from a fortunately bygone era, when white scholars and adventurers cataloged and surveyed the unexplored corners of our world, and created taxonomies of the "lower races" as if they were just part of the local fauna. The reality is that Charles Darwin's age was fundamentally one of white supremacy. In the year 1900, one out of three human beings alive was of European extraction. In the four centuries since Christopher Columbus, Europe and its Diaspora had entered into massive demographic expansion---which many Victorians saw as survival of the fittest. Progressives of the late 19th and early 20th century, such as H. G. Wells, foresaw a future where the "higher races" would naturally marginalize those peoples who were lesser participants in civilization. Such was taken as the judgment of nature. How 100 years do change things. And yet just as Darwin could not help but reflect the presuppositions of his era, so we in our day can not help but channel the zeitgeist. Like Charles Darwin, today's scholars have concluded that humans are fundamentally an African species. But unlike Darwin they conclude from this that there is a biological, essential unity of humankind, such that talk of "civilized" and "savage" is rendered moot and irrelevant. We do look through the mirror of our ages darkly, seeing startlingly different insights from the same shadows of reality. Whereas racist assumptions and beliefs were supported by interpretations of science of the 19th century, today we attempt to harness science in the opposing direction. The topic of human variation, and more plainly, race, is fraught. The past century has seen a wild swing from the widespread acceptance of the idea that human races are real, with big, important differences, to the opposite position: that race is fundamentally an illusion, a social construction of the human mind. But both of these arguments are mistaken. The established modern consensus about the equality of people, irrespective of race, is morally and ethically justified. But these beliefs we hold to be true do not derive from the natural science, which doesn't present a clear moral lesson. 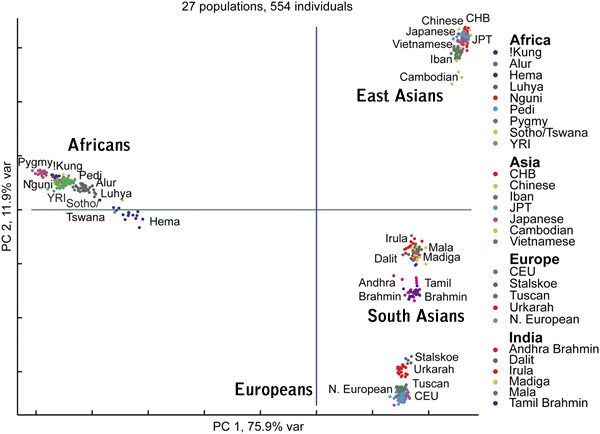 The image above, from a 2009 paper, is one of the clearest refutations of such assertions. An evolutionary chart, or phylogeny, of human population is not difficult to construct. Multiple different genetic methodologies have converged upon the same general pattern of Africans differentiating from non-Africans, and West Eurasians differentiating from East Eurasians, and so forth. Why? Though on any given gene, one may be more similar to an individual from some distant population than an individual from the same population, when looking at the average across many genes, there is a clear pattern whereby individuals from the same populations tend to share variants in common. 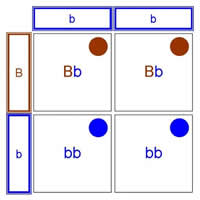 We can see this point by making an analogy between populations and families. Blue eyes are inherited in a roughly recessive fashion. That means that parents of opposite eye colors may have children with blue or brown eyes (as in the chart to the left), while people who are unrelated may share the same blue eyes with some of these children. Clearly on that particular gene, two unrelated individuals can be more similar than parents and their own offspring (e.g., brown eyed parent/blue-eyed child vs. blue-eyed strangers). But it doesn't follow from this that parents and offspring are less genetically similar overall than strangers with the same eye color as some of the children. Rather, it tells us to be careful of extrapolating from just one gene when it comes to thinking about overall patterns of genetic relatedness.

Assertion: "We are all Africans" 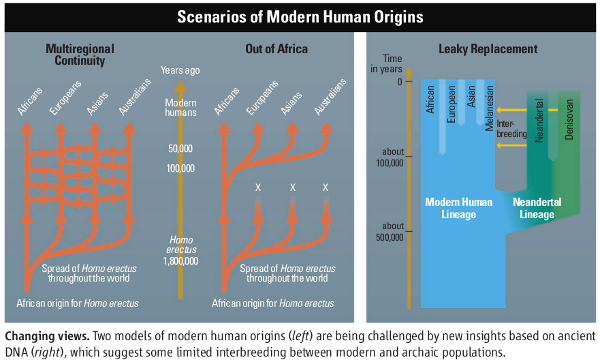 Today this assertion needs the qualifier "mostly." To make a long story short, the "strong form" of the "Out of Africa" model of human origins seems to be falsified

by the most recent genomic data. Rather, it looks as if modern human populations are a synthesis of a dominant "Out of Africa" lineage, flavored with assorted other populations, until recently known as "archaic modern humans." The most famous of these were Neanderthals, but it looks as if they may just be the first in a long list of other

humans interbred with. In fact, some hunter-gatherer African populations, the Pygmies and San, may harbor very deeply diverged ancestry from the mainline African stock. These are hominin lineages which separated from the lineage which led to the "Out of Africa" migration nearly ~1 million years ago, only to recombine in the last few tens of thousands of years with these hunter-gatherers (in contrast, the divergence between Neanderthals and anatomically modern humans occurred on the order of ~250,000 years ago). What does all this imply? On a deep level, in terms of morals and ethics, pretty much nothing. If the human tree becomes more busy and complicated, does that entail that our moral and ethical systems should become more complicated and nuanced? I suspect that most people would react in horror at such a reconsideration, which goes to show that the precise nature of recent African origins for humanity was more of an icing on the cake, rather than a concrete basis of one's motivation for human decency. How humans came about is less important than the fact that we are all human.

Assertion: Because modern humans are a young species, there has not been enough time for major differences to emerge between populations.

years ago a set of strangely mutated humans arose. They continued to be able to digest lactose sugar as adults, in contravention of the mammalian norm. In fact, humans are the only mammals where many adults continue to be able to consume milk sugar as adults. The rapidity of this shift has been incredible. 5,000 years ago almost everyone in Scandinavia was lactose intolerant

. Today, very few are. The area of the European genome responsible for this shift is strikingly homogeneous, as a giant DNA fragment "swept" through populations in a few dozen generations. The literature on recent human evolution

is still evolving, so to speak. But it is clear that during the Holocene, the last 10,000 years, our species has been subject to a wide array of selective forces. Lactose tolerance, malaria tolerance, differences in color, hair form, and size, seem to be due to recent adaptations. And because of different selection pressures human populations will evolve, change, and diversify. Our African ancestors left 50 to 100 thousand years ago. If 10,000 years was enough time for a great deal of evolution, then the "Out of Africa" event was long enough ago to result in genetic diversification, which we see around us.

Assertion: Race is a social construction and a biological myth.

Race, the way we have traditionally thought of it, is indeed a social construction. But whether racial groups are purely a biological myth is debatable. There are serious biologists who believe that race is a

. Race may be a biological myth, but there is no unanimous consensus on this topic, and those who dissent from the position that it is a myth are not marginal cranks. 100 years ago almost everyone agreed that race was real, and that the consequences of race entailed that populations should be subject to different standards of treatment. Today almost no one agrees with the proposition that populations should be subject to different standards of treatment (besides racism-countering policies like affirmative action), but there is disagreement on whether race is real or not. The key issue is to move beyond the term race. Rather, the question is this: does evolution apply to humans? If so, then we must remember that variation is the very stuff of evolution. Not only does variation emerge as an outcome of evolution, but it is the raw material of evolution. The creationist Duane Gish is wont to say that if you tell people they are animals, they will behave like animals. The reality is that humans are animals, but we are no less human for it. Similarly, people fear that if you admit that populations may be biologically different it may lead some to conclude that they are morally different. But the fact is that different populations are biologically different, and none are less human for it.