Earlier this year, I wrote about how the human obsession with size is reshaping the bodies of other species at an incredible pace. Unlike natural predators that cull the sick, weak and unfit, human fishermen prize the biggest catches and throw the smallest ones back in.

As a result, fish and other species harvested by humans are shrinking, often within a few generations, and are becoming sexually mature at an earlier stage. These changes are bad news for populations as a whole, for smaller individuals often have lower odds of survival and produce fewer offspring.

But David Conover from Stony Brook University has found a silver lining in this tale - selectively harvesting fish can lead to dramatic changes in body size, but these changes are reversible. Release them from the pressure of constant hunting, and some of the animals start to rebound to their previous state.

Conover spent ten years raising a commonly harvested species called the Atlantic silverside in six captive populations, each containing about 100 individuals. Every year, the fish produced a new generation and for five years, Conover would remove 90% of the fish, either by taking the largest ones, the smallest ones or randomly selected individuals. In every other way, the fish were all reared under exactly the same conditions. This constant upbringing ensured that any changes to their bodies would be the result of genetic influences rather than environmental ones.

The result: the fish changed dramatically in their size, growth rate, population size and other related traits. The populations which had lost their largest members grew more slowly, reached smaller sizes and were thinner in numbers. The groups where the smallest fish did the opposite.

For the next five years, Conover relaxed the pressure on all six populations. He found that some of the evolutionary changes wrought by the size-based harvests were indeed reversible. The recovery was slow, but it was there. 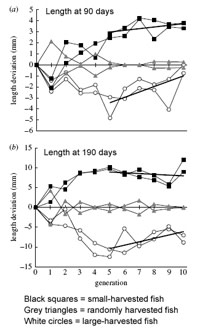 Among the shrunken populations that had lost their largest members, their average length at 3 months of age shot up and was almost back to normal after the fifth year of recovery. At an age of 6 months, their progress had slowed somewhat but their average length had still increased and they had recovered about half the original loss in size. In about seven more generations (12 years in total since the end of fishing), the population should be back to normal (although admittedly, the recovery will probably start to slow later down the line).

Conover thinks that there is a natural impetus for these smaller populations to return to their original size. The shift towards smaller bodies and slower growth also dragged along a wide variety of other changes - the fish had smaller appetites and less efficient metabolisms, were less bold in their search for food and produced fewer eggs. Generally, these traits go hand in hand with lower success, so once fishing stopped, the silversides were naturally driven to reverse the changes.

On the other hand, the populations that became bigger because their smallest members were removed kept their altered forms. They didn't shrink back to their previous size once the evolutionary pressure of fishing was lifted and Conover suggests that they had little cause to. In natural populations, the presence of predators tends to put a cap on how large and quickly silversides can grow - mature too fast and they become more vulnerable. But in danger-free captivity, the costs of growing quickly were probably not heavy enough to outweigh the benefits of a large size. The result: no change.

Conover also found that over the experiment's ten years, the variation in the size of the silversides stayed roughly the same. That's important, for a big worry about fishing is that the intense evolutionary pressures it places on fish could lead to a loss of genetic diversity or allow inferior genes to gain a foothold. That in turn would cripple the population's potential for future evolutionary change.

However, at least in Conover's experiments, these concerns seem unfounded. The range of individual lengths stayed the same, as did the silversides' survival rates. Genetic variation may have dwindled slightly, but there was more than enough left of a spot of evolutionary rebounding.

There has been some evidence for this already but it's been largely circumstantial. In cases where wild fisheries have closed, some of the prey fish, from pike to salmon, have bounced back to their previous sizes. But in all of these cases, the comebacks could have been driven either by evolution or by "phenotypic plasticity" - the ability of individuals to develop in different ways in response to their environment, even their genes are the same.

Obviously, this was a very artificial and small-scale set-up compared to what actually happens in a wild fishery. But it was a very carefully controlled experiment, and that's a strength. It allowed Conover to separate the relative contributions of genetics and environment to the evolution of the silversides. And it provides good news for fisheries managers because it suggests that the evolutionary changes caused by fishing are indeed reversible.

The actual recovery rate of wild populations may be much slower than in the captive silversides. The evolutionary pressures imposed by fishermen tend to be much less extreme than those imposed by Conover. The silverside also has a particularly short lifespan (which makes it ideal for lab experiments like this). Most heavily fished species have generation times of 3-7 years, which means that the recovery seen in Conover's silversides would take 30-80 years for most other fish.

And any rebounds will be affected by changes in predators, prey, competitors, the local habitat and many other factors. This experiment is proof that such rebounds are possible, but it should by no means be taken as cause for complacency.