How to Build A Better Mouse Maze 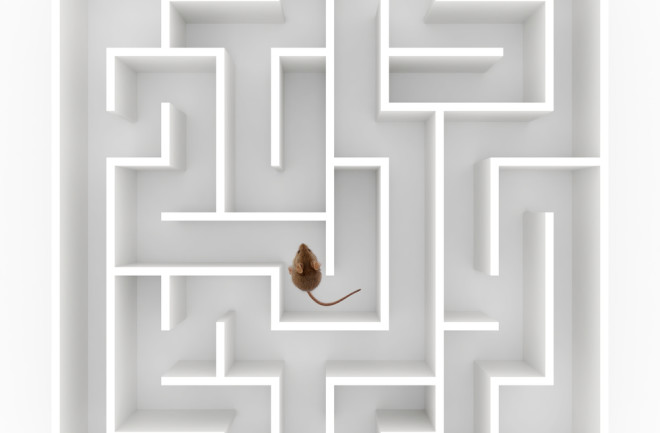 Which way is out again? (Credit: Szasz-Fabian Jozsef)Graduate psychology students can attest to the monotony of studying lab rats. Drop the animals into a maze, take diligent notes as they scurry around, repeat ad nauseum.Mazes have been a mainstay in psychological research for more than a century, with scientists running rodents through contraptions to test their memory, learning and spatial skills. But they’ve always had limitations. Now modern technology is finding its way into mazes, making them more consistent and less time-consuming. Video tracking systems monitor a rat’s every movement, sparing researchers from hours of tedious observation and recording better data. Pneumatic doors rise from below after the animals pass to prevent them backtracking.MazeEngineers, a startup in Cambridge, Massachusetts, produces mazes with these automated elements. It’s founder, Shuhan He, a resident physician at Massachusetts General Hospital, realized as a medical student that the available mazes didn’t meet his needs for research on the effects of stroke. Knowing mazes are fundamental to understanding the processes of the mind, he began developing his own.“The only way to see how the brain works,” he said, “is to see how it behaves.”

He stands in a long line of scientists with a belief in the power of mazes. Edward C. Tolman, in his presidential address to the American Psychological Association in 1937, asserted that with few exceptions, he could conduct all the research he needed with only rats and mazes.“Everything important in psychology,” he said, “can be investigated in essence through the continued experimental and theoretical analysis of the determiners of rat behavior at a choice-point in a maze.” Bold as the statement may be, it’s a testament to the status of mazes in a long tradition of psychological and neuroscience research.But they’ve transformed completely since Tolman’s day. The labyrinths we picture when we think of behavioral psychology experiments belong to the late 19th and early 20th centuries. Research mazes were once modeled after elaborate paths like the one at Hampton Court, a stately hedge maze in the United Kingdom commissioned in 1700. But these fell out of style decades ago, giving way to simple designs that measure simple behaviors, like how long a rat pauses before making a decision, or the direction it takes at a junction. These actions are easier to analyze and compare statistically.The late 1970s and early 1980s saw the first applications of the Barnes

Morris water maze, highly regarded standards today. The first consists of a circular board with holes around its edge. Most are dead ends, but one leads into a box. The maze takes advantage of the fact that rats have an inborn aversion to open, vulnerable spaces, so they seek the shelter of the box. The Morris water maze is a small pool of water, clouded with white liquid, and a submerged platform. As in the Barnes maze, a rat dropped into the pool will swim in search of a safe place to stand. Both are now ubiquitous in psychological research.These, and mazes in general, are useful for scientists to watch the brain in action. An animal’s actions in a maze reveal something of how it learns and remembers its surroundings, or of how it’s affected by anxiety and fear. Mazes have been used to study Alzheimer’s disease, the effects of brain injuries and how various chemical compounds affect the brain. Researchers study how the rats react to shed light on human psychology.Today, most researchers aren’t even interested in just behavior anymore. Like He, they use mazes to learn about how conditions like autism and trauma impact the brain, or to test the effectiveness of treatments. Mice that have been genetically modified to present symptoms of disease, or that have been injected with compounds of interest are compared to normal mice as they navigate mazes to see if they behave any differently.“I don’t really care about the behavior,” He said. “I care about showing something works.”Age of AutomationBy the mid-1900s, rats no longer navigated convoluted corridors. Instead, they searched for platforms in murky tubs of water, climbed ladders for rewards, or simply made the choice between left and right. Modern mazes are hardly what we imagine when we hear the word. Advances in technology have also resulted in mazes that are almost fully automated, opening up new avenues of research and further removing humans from experiments. Doors open and close by themselves, feeders dispense food automatically, and sensors track adventurous mice as they make their way through the maze.And along with unique mazes optimized for specific kinds of research, the process of information-gathering and processing has gotten much better as well.Video tracking systems record movements in real time, and software programs can analyze that visual information quickly to produce large amounts of data.Video records mean that experiments need no longer rely on their personal judgments about behavior (for example, whether a rat froze or only hesitated), and today, maze research is more objective and standardized. This way scientists can compare results and be more sure of their accuracy.He’s staff at MazeEngineers works with scientists to incorporate automation technology into mazes, and they also scour old studies from the early days of maze research for inspiration for their products.“It’s incredibly boring,” He said, “but they know literally everything about behavioral neuroscience.”Smart MazesThe company offers automated versions of several popular mazes, including the T and Y mazes. Their T maze offers rats several different paths to take, and its doors lift to direct rats back to the start, virtually eliminating the need for human involvement. Likewise, the Y maze uses automated detection to hold rats at its center, allowing it to continue trials indefinitely. With more options in terms of maze design, researchers can probe more nuanced questions.Another smart maze company, TSE Systems, based in Germany, makes a maze that houses up to 16 mice and can track each one individually using radio frequency identification tags. This allows researchers to check in with mice as they interact in a comfortable, social environment.MazeEngineers’ latest endeavor is the Labyrinth, an adjustable core that researchers can configure into more than 20 automated apparatuses. As mazes become more sophisticated, their data output grows and with it their relevance to psychology and neuroscience. Tolman’s faith in the significance of lab rats may have been better founded than he knew.