How the Frog-Killing Fungus Does Its Dirty Work 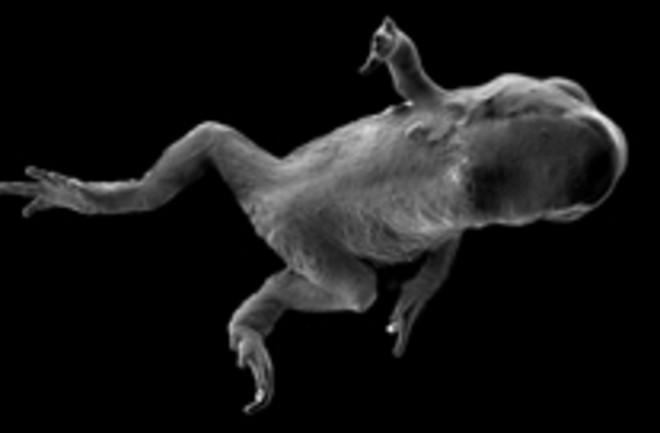 The chytrid skin fungus is killing frogs around the world, and researchers worry that it is already driving some species to extinction--but until now, no one understood how the fungus killed. Now, new research shows that the fungus disrupts the flow of nutrients through the frogs' skin, ultimately leading to cardiac arrest. In the study, which will be published tomorrow in Science, the scientists found that the fungus interferes with the frogs' ability to absorb electrolytes, the electrically conducive molecules that are vital for muscle and nerve function. Diseased green tree frogs had dramatically lower levels of potassium and sodium in their blood and urine. Says study coautor Wyatt Voyles:

Further experiments confirmed that the electrolyte imbalance led to a heart shutdown. The scientists

took electrocardiogram recordings of the frogs' hearts in the hours before death; and found changes to the rhythm culminating in arrest. Drugs that restore electrolyte balance brought the animals a few hours or days of better health, some showing enough vigour to climb out of their bowls of water; but all died in the end [BBC News].

Researchers' next task will be to determine exactly how the fungus interferes with the electrolyte absorption: it could be a result of cell damage in the skin, or a toxin produced by the fungus. Related Content: 80beats: Salamanders Are Quietly Vanishing From Central American Cloud Forests 80beats: Frogs Get a One-Two Punch From Farm Chemicals DISCOVER: Are Frogs Hopping Straight Into Extinction? DISCOVER: 10 Studies That Revealed the Great Global Amphibian Die-Off–and Some Possible SolutionsImage: Jamie Voyles, Alex Hyatt, and Frank Fillipi