The Amazing Physics That Helps a Cat Take a Drink

Without the ability to suction up water like us, cats need to get clever. 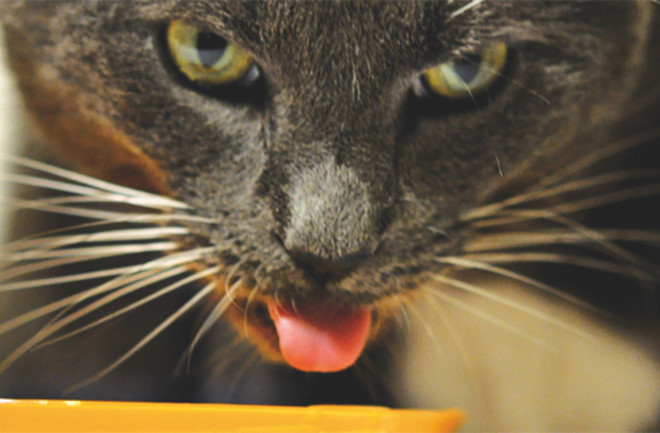 Cats have been our companions for almost 10,000 years. They have been worshipped by Egyptians, killed (or not) by physicists, and captioned by geeks. And in all that time, no one has quite appreciated how impressively they drink. Using high-speed videos, Pedro Reis and Roman Stocker from the Massachusetts Institute of Technology has shown that lapping cats are masters of physics. Every flick of their tongues finely balances a pair of forces, at high speed, to draw a column of water into their thirsty jaws.

Drinking is more of a challenge for cats than for us. They have to drink from flat, horizontal bodies of water. Even with our hands tied, we could do that just by putting out mouth at the surface and sucking, but then we have large cheeks that can form a proper seal. Pigs, sheep and horses have the same ability, but cats and dogs do not. Their cheeks don’t extend far enough forward so they have to use a different technique: lapping.

Cat owners have watched their pets lap at water for thousands of years but when Stocker did so, his curiosity was piqued.

“Three years ago, when I was watching my cat Cutta Cutta lap during breakfast, I realized there was an interesting biomechanics problem behind this simple action,” he says.

The lapping motion is so fast that to fully appreciate it, you need a high-speed camera. Slow-motion films of Cutta Cutta revealed that a cat doesn’t actually scoop up its drink with its tongue in the way that a dog does. Its technique is more subtle.

For a start, it drinks only using the very tip of its tongue. As it extends its tongue, it curls the tip upwards so that the bottom side rests on the surface of the liquid, without actually breaking it. The cat lifts its tongue, drawing a column of liquid with it. Just before the column collapses, the cat closes its mouth, captures the elevated liquid, and takes a refreshing drink.

This sequence depends on a battle between two forces. The first is inertia, the tendency for the water column to keep moving in the same way until another force acts upon it. That force is gravity, which constantly threatens to pull the water column back into the bowl. With its rising tongue, a cat uses inertia to “defeat gravity” long enough to close its mouth on the almost-collapsing tower of liquid.

Amazingly, Reis and Stocker found that this sequence was first filmed way back in 1940, in an Oscar-winning documentary film called Quicker ‘n a Wink (the cat’s at 4:42).

“MIT has a center for high-speed photography started by and named after Doc Edgerton,” says Stocker. “After we had borrowed high-speed cameras several times to get shots of Cutta Cutta, conversation casually turned to the topic of our investigation. When Jim [Bales, who runs the center] heard it was the lapping of a cat, he got very excited and immediately pointed us to a 10 second video clip by Doc Edgerton, who had captured high-speed videos of a cat lapping 70 years ago! Edgerton did not attempt to explain the mechanism of lapping, but his clip remains timeless (the commentary even more so!).”

Skip forward 70 years, and Stocker and Reis’s modern (and colour) videos reveal the action in even greater detail. Reis used these to work out Froude’s number, a value that measures the trade-off between inertia and gravity. For domestic cats, the number is 0.4, close enough to 1 to indicate a good balance between the two forces.

The duo also analysed the lapping action using a glass disc to mimic the tongue-tip of a cat, and robotic stage to lift the disc at pre-programmed speeds and heights. These revealed that the cat pulls its tongue back at just the right speed and to just the right height to draw the largest volume of water into its mouth.

Stocker and Reis even found that all types of cats, from the humble house tabby to the mighty tiger, lap in the same way. He grabbed some films from a local zoo and in an astonishing case of the Internet providing useful cat videos, he scoured YouTube for videos of big cats lapping.

The videos showed that just like domestic cats, the Froude’s numbers for lapping tigers, lions and leopards are all close to one. Again, inertia and gravity are play off against each other to produce the greatest possible sip, although the bigger cats compensate for their bigger tongues by lapping more slowly. All of this started with something as simple as a cat owner watching his pet drink from a bowl and wondering how it does it.

From there, the team pursued their project without any funding, or help from graduate students. They just really wanted to know the answer. If you look at the world through the eye of a scientist, even an unassuming sight like a cat drinking from a bowl can be a cool discovery just waiting to happen. Rather than killing cats, curiosity can thrive on them.