How many people did the man-eating lions of Tsavo actually eat?

In 1898, railway workers in Tsavo, Kenya were terrorised by a pair of man-eating lions, who killed at least 28 people during a 10-month reign of terror. It ended in December when a British officer called Lt. Col. John H. Patterson killed both beasts.  The man-eaters’ notorious exploits have been immortalised in no less than three Hollywood films, including most recently The Ghost and the Darkness. But despite their fame, no one is quite sure how many people they killed. The Ugandan Railway Company said 28; Patterson claimed it was 135.

Both parties had reasons to lie, either playing down or exaggerating the figures for the sake of reputation. But Justin Yeake from the University of California decided to find the truth by going straight to the source – the remains of the man-eaters, currently on display in Chicago’s Field Museum of Natural History. By studying the chemical composition of the lions’ hair and bones, Yeake estimated that they killed around 35 people, with a possible range of 4 to 72. Either way, Patterson’s claim was wildly exaggerated. 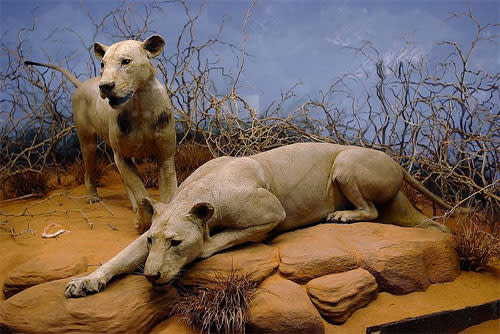 The Tsavo man-eaters at the Chicago Field Museum, taken by Jeffrey Jung

The Tsavo man-eaters at the Chicago Field Museum, taken by Jeffrey Jung

Yeake took samples of the lions’ bone collagen and hair keratin, and measured the ratio of carbon and nitrogen isotopes. Both can tell you about the items on a lion’s menu – bone collagen grows slowly and reflects the lion’s lifetime eating habits, while keratin from fast-growing hairs reveals the nature of its meals over the past three months.

Yeake compared these ratios to those of modern Tsavo lions, and matched them against those form various prey animals including giraffe, kudu, impala, zebra, buffalo and humans. The human samples came from remains collected by anthropologist Louis Leakey during his East African Archaeological Expedition of 1929.

The results showed that the diet of Tsavo’s modern lions consists almost entirely of grazing animals such as zebra, waterbuck and buffalo. The man-eaters were different. Yeake calculated that one of them probably ate around 11 people in its nine-month hunting spree, but focused mainly on expanding its tastes in herbivores.

His partner switched menus even more dramatically, moving to a diet of browsers (giraffe, kudu and the like) and humans. By winter, a third of his food came from freshly killed humans. This was the animal that caused the lion’s share of deaths among the railway workers, and Yeake estimates that he ate around 24, giving a total kill count of 35. Of course, these are only estimates, but there’s a 95% chance that the true figure falls within the range of 4-72.

These disparate diets make the cooperation between the two males even more astounding. Both specialised on different rare prey and, if anything, their tastes diverged even further from one another over time. And yet, they frequently exposed themselves to danger to kill animals that only one ate. That sort of behaviour had never been seen before or since. Perhaps by working together, they could scatter both humans and game, so that both could be fed? For the moment, we just don’t know.

Nor is it clear why the lions starting eating people in the first place, although Yeake has two theories. For a start, the lion that killed the most people had severe injuries, including diseases of the skull and teeth, skull evinced craniodental, poorly aligned jaws and a fractured tooth. It wasn’t exactly a king among beasts, and it supports the idea that big cats are more likely to prey on humans if they’re ill or impaired.

The Tsavo killings took place against a backdrop of intense environmental changes. Elephant populations had plummeted and as a result, woodlands were expanding and the savannah’s grazers were being driven away. The remaining herds were thinned by a 13-year drought and a pair of viral epidemics in 1889 and 1898. And just as these walking sirloins dwindled away and the lions started to hunger, a new type of prey arrived in the region – humans, charged with building the Uganda Railway. The rest is history. 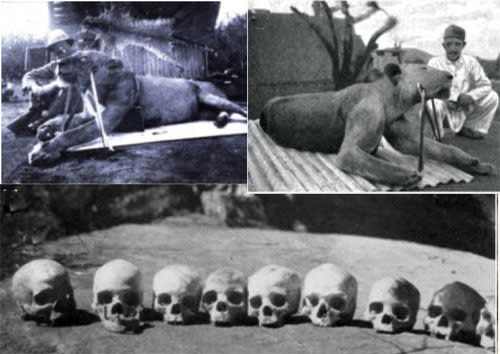 The two lions, Lieutenant Patterson (in top-left) and a Taita ancestral shrine.

The two lions, Lieutenant Patterson (in top-left) and a Taita ancestral shrine.