Cats manipulate their owners with a cry embedded in a purr 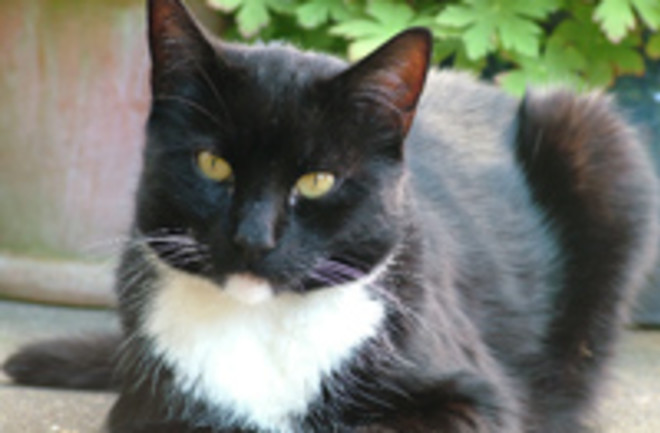 While dogs can often be taught new tricks, cat-owners will be all too aware that it can be very difficult to persuade them to do something they don’t want to do. Eddie Izzard summed it up best in his legendary Pavlov’s cat sketch, where felines are quite capable of outfoxing (outcatting?) eminent Welsh-Russian psychologists. Real cats may be less devious, but only just – new research suggests that they are very skilled at getting their human owners to do their bidding.

When they want food, domestic cats will often purr in a strangely plaintive way that their owners find difficult to ignore. By analysing the structure of these calls, Karen McComb from the University of Sussex has found out why. On the surface, the “solicitation purrs” are based on the same low-pitched sounds that contented moggies make, but embedded within them is a high-pitched signal that sounds like a cry or a meow. It’s this hidden signal that makes the purr of a hungry cat so irresistible to humans.

McComb has a long history of research into animal communication and she has studied the calls of African elephants, red deer, lions and macaques. But it was her own cat, Pepo (pictured above), who provided the inspiration for this study.

“He consistently woke me up in the mornings with very insistent purring,” she said. “I wondered why this purring sounded so annoying and was so difficult to ignore.  Talking with other cat owners, I found that some of them also had cats who showed strikingly similar behaviour.  As I was an academic who actually worked on vocal communication [in mammals], I had the right background, tools and collaborators to tackle this question directly.”

McComb recorded 10 different cats purring under various circumstances, equalised the volume of all the recordings, and played them to 50 people. Her volunteers rated the purrs of a food-seeking cat to be more urgent and less pleasant than purrs made while resting, sitting or petting. When given a choice between the two purr categories, listeners consistently rated the ‘solicitation’ purrs as being more urgent. They could do so even if they had never owned a cat before (although cat-owners were a little more accurate).

When McComb analysed the acoustic structures of the different purrs, she found that the solicitation purrs have an unusual high-frequency peak that doesn’t fit with the rest of the call. At a frequency of around 380 Hz (middle G or thereabouts), this extra sound stood out from the typical low frequencies of a purr, and is more like a cry or a meow. The frequency is actually very similar to that of a crying infant, so small wonder that it tugs on the human heartstrings.

Normal purrs are made by rapidly vibrating the muscles of its vocal cords, but a cat needs to deliberately push air past these muscles – a phenomenon called ‘voicing’ – to produce the higher-pitched component. This voiced acoustic feature is critical for a cat’s food-acquiring antics, for McComb showed that the more intense it is, the more urgent and unpleasant the resulting purr to humans

As the ultimate test of its importance, McComb took recordings of solicitation purrs and removed the voiced element, leaving everything else the same. Without it, human volunteers could no longer tell the difference between these purrs and others.

McComb suggests that cats (and even cheetahs) have this small voiced component in their normal purrs anyway. She says, “We’d be interested to see if kittens use it when their mothers are trying to wean them or don’t want to feed them any more.”

It certainly seems that cats who spend a lot of time around humans have learned that exaggerating the voiced peak is a good way of manipulating their owners’ sensory sensitivities. The resulting calls are also less harmonic, which makes it more difficult for people to become accustomed to them. Plus, they’re probably quite useful for conceal drilling activities (see 1:24 in the video).

The manipulative purrs seem to be most frequently used by cats who have the most one-to-one contact with their owners, rather than those who live in large households where purring might get drowned out by the general din. In fact, the private nature of these noises made the simple act of recording cat purrs surprisingly difficult.

“I’ve worked on communication and cognitive abilities in a wide range of mammals including African elephants and lions – but cats were one of the most challenging subjects to date,” she said. Cats often purr in private with their owners and they tend to clam up or leave when strangers turn up. McComb could record Pepo’s purrs, but she actually had to train cat-owners to use the recording equipment themselves. These obstacles are reflected in the paper’s brilliant Acknowledgments section, which reads: