When Marco Polo heard eerie sounds coming from the Gobi Desert sand, he suspected mysterious spirits. Scientists have another explanation for the noisemaking. 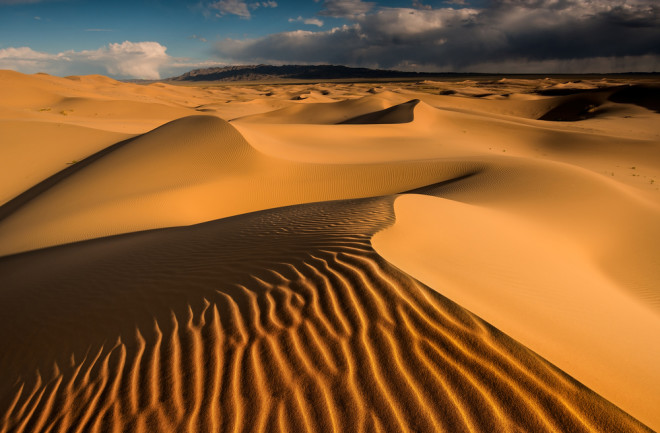 When Marco Polo crossed the Gobi Desert in the 13th century, he thought he heard the voices of restless spirits. In Book One of The Travels, Polo says:

"… when travellers are on the move by night, and one of them chances to lag behind or to fall asleep or the like, when he tries to gain his company again he will hear spirits talking  .… Even in the day-time one hears those spirits talking. And sometimes you shall hear the sound of a variety of musical instruments, and still more commonly the sound of drums."

Polo wasn’t hearing anything supernatural, but he wasn’t imagining it, either. The sands of the Gobi desert do make some bizarre and hauntingly beautiful sounds. R. A Bagnold, an English explorer who led many desert expeditions in the early 20th century, poetically described the phenomenon as, “the great sound which in some places startles the silence of the desert.”

Scientists call it singing or booming, or less often whistling. (It’s worth pointing out that these “singing sands” are doing something quite different — and far more awe-inspiring — than the squeaky sound you sometimes hear when you walk barefoot on the beach.) Though singing sands often sound like the cello section of an orchestra warming up, they can make a variety of pitches and patterns.

In the years following Polo’s historic trek across the Gobi, various theories about what caused the sounds were put forward. Theories of restless dead beating drums were replaced by the movement of underground water or breezes blowing in just the right way across the sands. But it wasn’t until the 21st century that the mystery was (mostly) solved. The awe, however, has not diminished.

Musical dunes can be found in the Sahara, the Mojave, and several other deserts around the world. But not all dunes break into song. That’s why Melany Hunt and her team set out to discover what makes sand dunes sing. “If we can explain why it happens, we should also be able to explain why it doesn't happen in other places, or other times,” says Hunt, a professor of mechanical engineering at Caltech.

Catching a dune mid-melody is tricky, though. It doesn’t happen just any old time. “We've been out there a couple times when maybe the wind kicks up and starts a small avalanche on the side of the dune,” says Hunt. “Then you can hear the sound build up. But in all the times we went out there, that was pretty unusual.”

But if you’re there to study it, you can’t wait around to get lucky. When Hunt’s team wanted to do some studies, they goosed the dunes a bit. “We would have a group of people, and we'd all start at the top and slide down together on our backsides, pushing sand down with our hands and feet to create an avalanche,” she explains. “It starts slowly, and the sound builds. You can feel the vibrations with your hands. It really is quite remarkable.”

When innumerable grains of sand tumble down a dune in an avalanche, or even when sand is displaced by humans, such as Marco Polo and his companions or Hunt and hers, the grains slide along the face of the dune and jostle against one another. Whether or not this is enough to create a song depends on several things. The grains have to be shaped just right. The dune has to be big. The sand has to be dry. You’re not likely to hear the dunes sing after a rain.

But it’s the structure of the dune itself that makes the singing loud enough to “startle the silence of the desert.” Hunt explains that at some depth within the dune there is a very hard layer, and this layer reflects and amplifies the sound. The sound waves get trapped in what is something like a giant sound box, reflecting and amplifying the sound of the tumbling grains of sand.

The singing sands of the Gobi and other deserts aren’t caused by spirits, but they are beautiful enough to uplift the spirits of those lucky enough to hear them.