How Old Is the Oldest Sea Turtle?

Sea turtles can live for decades, but climate change and human intervention may be cutting their lives short. 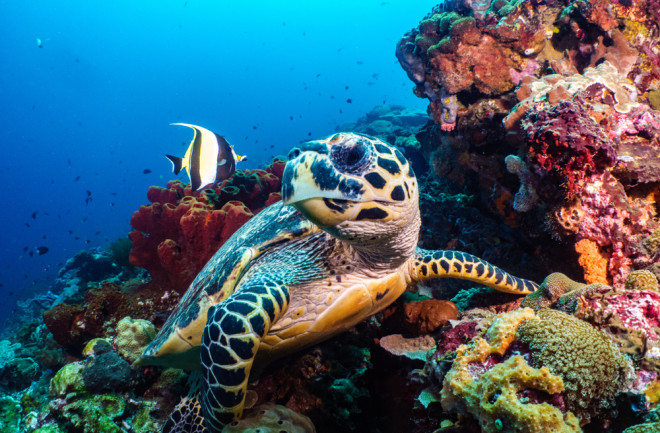 One of the recurring questions in Disney’s Finding Nemo is: How old are sea turtles? Offscreen, Nemo is originally told by a classmate that they can live to be 100 years old. But upon meeting Crush, the surfer dude-esque sea turtle, Nemo’s dad finds out that Crush is “hundred and fifty dude, and still young!”

Many factors can limit the age and lifespan of turtles, from environmental stressors to human activities like commercial fishing, marine debris and boating. Globally, one of the largest threats is the destruction of nesting and feeding habitats. These factors make it difficult to tell if a cause of death was natural or otherwise.

With only seven species of sea turtles in the world, you might think gathering information on them is a walk in the park. In actuality, the opposite is true. “You see the hatchlings on the beach and you see the adult females come ashore to nest,” says Avens, “and in between those times the juveniles go out to the open ocean and can spend anywhere from one to 15 years out there on average, depending on the species.” Because sea turtles can migrate hundreds (if not thousands) of miles before returning to coastal waters, it’s difficult to watch individuals grow over time.

Not to mention, sea turtle age is incredibly difficult to study in general, adds Avens. That's why researchers use indirect methods of aging like skeletochronology — a process similar to the dating of a tree via its rings. During this process, scientists take a cross-section of a deceased sea turtle’s humerus bone, remove the calcium and add a stain that highlights the growth rings in the bone's tissue.

Researchers can then view these samples under a microscope to determine the relationship between ring spacing and the size of the turtle as it grew. The caveat to this method, explains Avens, is that the estimated sea turtle age is only its minimum possible age.

Though it is difficult to determine the exact age of sea turtles, it's clear that they do live for decades and that longevity can be influenced by several factors.

As a general rule, the larger an animal is, the longer it tends to live. The seven different species of sea turtles vary in size and age; smaller species like the Kemp’s ridley and olive ridley sea turtles mature at around 10-15 years old, says Avens, and they typically live another decade or two beyond that. Larger species, on the other hand, such as the loggerhead and green turtles, mature around 25-35 years old and could live to be 70-80. Remember, however, that those longevity estimates are based on the minimum possible ages deduced from counting growth rings.

Other factors that could contribute to sea turtle longevity include their slower heart rate and slow metabolism. While near the surface of water, their heart beats about 25 times per minute; but further submerged, their hearts can slow to around one beat per minute. They also boast a slow metabolism. Mammals, depending on their size, age differently due to their metabolic rate and how fast their cells regenerate and get used up. Physiologically, says Avens, sea turtles cellular functions don't seem to deteriorate at the same rate as mammals — though it's not clear why.

Regardless, sea turtles as a species have been around for millions of years. According to Cook, prehistoric sea turtle fossils from 120 million years ago are very similar to the remains of modern-day sea turtles, meaning sea turtles once swam among other giant marine reptiles. “They have a very good anatomy structure that can withstand the test of time,” she says, “at least until humans got involved.”

While the average sea turtle may have the potential to live a long life, there is still ample human interaction — including bycatch from commercial and recreational fishing — that is cutting their lives short. Overall, Cook and Avens say that bycatch and loss of nesting habitat seem to contribute the most harm to sea turtles. In addition, there is the added uncertainty of how sea turtles will react to climate change.

“I think the biggest one that seems to be on people’s minds is the increase in global temperatures,” says Avens. “Because with sea turtles, like other reptiles, the sex of their offspring is determined by the temperature at which the eggs incubate.” Hotter temperatures could mean an increase in female sea turtles, resulting in fewer males to replenish populations and causing genetic issues. A 2018 study published in Current Biology even found that some green turtle nesting habitats off the Great Barrier Reef have already been producing mostly female offspring, with the possibility of all female offspring in the future.

And while beach construction can take away nesting habitats for sea turtles, light pollution at night around these beaches is another big issue. “It can impact the hatchlings as well as the mothers,” says Cook. “Thousands of years ago, the brightest thing the turtle would see when it came onto the beach was the ocean. When you add all of this external light that is brighter than the ocean, then the turtles get confused.”

When hatchlings first emerge, they don’t have a lot of energy to make it safely from the sand to the waves. When the bright lights from porches and street lights cause confusion, the turtles use up what little energy they have traveling toward swimming pools, roads or predators. Luckily, this issue is much better understood, and efforts are being put in place to switch to lower-frequency, turtle-friendly lighting in some beach communities.

Another theme in Finding Nemo is that “all drains lead to the ocean.” There is some truth in that all waterways eventually lead to the ocean, even inland waterways. Unfortunately, this means single-use plastics along with herbicides and pesticides can easily find their way into water sources like the Mississippi River and then into the Gulf of Mexico. Discarded fishing lines and nets can trap and drown sea turtles and other marine life. Even celebratory events like a balloon release or the plastic confetti that sometimes accompanies a gender reveal can lead to harmful pollutants in the ocean. One way you can help is to reduce your plastic use. Carry reusable water bottles and shopping bags. Disposable plastics often end up in the ocean and can harm or kill marine animals.

(Credit: NOAA Fisheries Glenn Zapfe) Turtle bite marks on a volleyball that was found floating off the coast of Alabama. Evidence that sea turtles will bite anything.

“Turtles just can’t distinguish in a lot of cases what's a food source and what is debris,” says Cook. “They will happily bite any little thing.” This can result in sea turtles eating plastics and getting a blockage in their intestines — which is often fatal. While it's not yet known how old the oldest sea turtle is, keeping beaches and oceans clean is a great way to help sea turtles reach an old age and still feel young.