How Mount Tambora and Other Volcanic Eruptions Inspired Artistic Masterpieces

Their paintings can provide scientists with a clearer picture of the atmospheric changes that occurred. 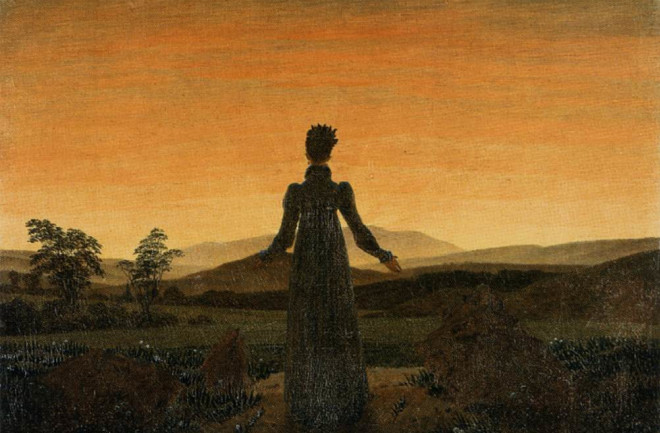 Woman before the Rising Sun shows a silhouette of a woman standing before an apocalyptic sky. Her back faces the viewer, arms raised as if to embrace the sun. Beyond the dark foreground, you can dimly make out a green field meeting gentle hills. A couple of trees barely poke above an uneven horizon, and faint rays of light highlight what appears to be a headdress and sleeves that puff pompously over the woman’s shoulders.

But in this work, which was created from 1818-20, German painter Caspar David Friedrich is almost drawing attention to what you can’t see — the brilliance of the sun on the woman’s face and the finer details about the landscape she’s admiring. What is arguably the most striking feature of the painting, however, is the sky ablaze with brilliant golden-orange hues.

Interpretations of the piece vary, and include everything from a display of becoming one with nature to religious devotion. But scientists analyzing the work say there’s more to the painting than meets the eye. A catastrophic natural disaster that happened just a couple of years before Friedrich put a brush to canvas was likely the inspiration for the dramatic sky in the artwork.

In April 1815, a volcano called Mount Tambora exploded and killed an estimated 10,000 people in Indonesia. To this day, it’s the largest known eruption in recorded human history. The effects were devastating, and spewed ash and other aerosols spread around the globe, blocking solar radiation.

“A volcano sends millions of tons of ash in the atmosphere and at great heights,” says Christos Zerefos, an atmospheric physicist who heads the Research Center for Atmospheric Physics and Climatology of the Academy of Athens.

In fact, 1816 has been referred to as “the year without summer” due to extreme weather conditions and chilly temperatures that followed as a result. If there’s a silver lining, it’s this: The ash and sulfates that traversed the globe created mesmerizing skies — and artistic masters from Friedrich to William Turner took notice. And in a time before color photographs were invented, these works of art are some of the most accurate depictions of the environmental changes that occurred after the Tambora eruption. But artwork created during this time period also reveals the social turmoil caused by this climate catastrophe.

Zerefos first became interested in volcanic paintings while looking for ways to estimate atmospheric physics and climate of the past. “The best observations I could figure out were those of the great masters and their paintings, before and after large volcanic eruptions,” he says.

In 2014, he and his colleagues surveyed hundreds of sunset paintings created between 1500 and 2000, a period that included more than 50 volcanic eruptions around the world. Based on the colors of the skies depicted in the artwork, the team calculated the amount of aerosols like sulfates and ash in the air. They then compared their estimates to the amount of ash particles present in the atmosphere at the time of the painting using ice core samples and other measurements.

The team found that the ratio of red to green paint used in the sunset representation corresponded to the actual level of volcanic aerosols in the atmosphere. And this was true no matter which painter or school of painting was responsible for the artwork. The researchers honed in on the use of red and green paint because these hues appear when there’s more particulate matter scattering light in the sky.

And in their analysis, the researchers found that volcanos aren’t the only factor that can cause these sky effects. While volcanic eruptions may have caused these colors in the past, atmospheric pollution from polluting gas emissions can cause similar effects — think smoggy, orange Los Angeles sunsets. Sandstorms also kick up a lot of dust that can significantly change sky colors. When the researchers grouped paintings into 50-year intervals, they could see the increasing effect of atmospheric pollution over time, regardless of the temporary volcanic effects.

To verify how well artists were at capturing changes in sky color, Zerefos asked a friend, the now-deceased post-Greek impressionist painter Panayiotis Tetsis, for help. Tetsis was asked to paint sunsets both during and after a 2010 dust storm blew north from the Sahara — without knowledge of when the storm was happening. Zerefos and his colleagues then compared the ratio of red to green colors of Tetsis’ paintings both during the storm and after the dust had settled down with photographs of the sky.

The researchers found that Tetsis could reproduce the color ratio as well as an expensive camera might, which proved to Zerefos what English painter William Turner once said: “My business is to paint what I see, not what I know is there.”

Virginia Tech researcher Zachary Hubbard, author of a separate Tambora art analysis study notes that painting a piece back then “was as close to a camera as somebody could have.”

Not only could artists accurately record what they saw, Zeferos says the paintings reveal that these master artists could recreate what they saw with a high degree of accuracy, even when they were creating art well after the eruption had occurred. “Somehow the brain has a memory in colors,” he notes.

While the Tambora eruption was influential, it wasn’t the only eruption to catch artists' attention. The Krakatoa eruption in 1883 was the likely inspiration for the sky colors used in Edvard Munch’s most famous painting, The Scream, painted in 1893 — around 10 years after Krakatoa blew.

“[Munch] really used his memory because he painted several versions of The Scream and the background was always influenced by the Krakatoa eruption,” Zerefos says. He adds that these artists likely weren’t even aware of the eruptions that happened on another part of the planet. “The artist has a great memory of what was going on [in the sky].”

Hubbard favors paintings that show humans as tiny figures in a wild landscape. For him, it represents the relative insignificance of our species in the face of massive geological processes that create natural features like mountains or volcanos, which we have little control over.

“The art is showing the correlation between the death and destruction, but also but also the beauty of the Earth and the atmosphere,” he says.

And otherworldly volcanic skies are more than pretty sunsets. What might not be apparent in some of the landscape art after the Mount Tambora eruption is the wide-reaching impacts it had on society.

Hubbard says that the so-called "year without summer" was a rough time in many parts of the world. In Europe, reduced sunlight and cooler temperatures on the heels of the Tambora eruption meant failing crops and starvation. The societal upheaval that followed also influenced artists of the era. In the 1817 painting, The Decline of the Carthaginian Empire, William Turner used historical events to represent hardship. Scenes of death and destruction depict the final days of Carthage, the most powerful empire prior to the rise of Rome. As with other Turner paintings of this time, the sky incorporates volcanic-inspired hues.

“There’s death all around you but then you have these beautiful sunsets,” Hubbard says.

But during this time, Turner and Friedrich still painted scenes of people in boats, on farms, or engaged in everyday activities — which could signal that people still had hope for better days to come. In Woman before the Rising Sun, Hubbard believes that Friedrich conveyed a sense of hope by showing the woman looking beyond dead crops and onto greener pastures.

“It shows just how resilient humanity can be,” Hubbard says.