How Humans Survived the Ice Age

We weathered the Ice Age while similar species disappeared. Specialists still struggle to understand why. 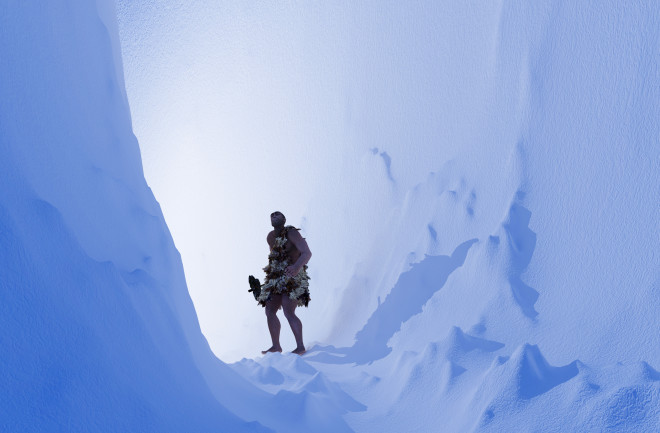 Since the origin of our species approximately 300,000 years ago, modern humans have spread throughout the whole world, armed with the ability to adapt to our surroundings.

Beyond the innate talent to withstand a wide variety of climates, Homo sapiens are also able to endure episodes of extreme climate change. In the Ice Age, starting approximately 115,000 years ago, humans survived wild swings in the weather that their hominin relatives were ultimately unable to stand. How did these humans do it? Anthropologists and archeologists currently lack a clear-cut answer. Yet the murky theories and potential explanations often emphasize our species’ exceptional social abilities and knack for altering our surroundings to our advantage.

To understand how humans survived and adapted to the Ice Age, it’s important to appreciate what they were dealing with. In long-lasting periods called ice ages, the temperatures throughout the planet’s atmosphere and surface cool, causing continental ice and glaciers to cover substantial swaths of the terrain. Though these periods are typically perceived as a constant freeze, ice ages actually feature frequent fluctuations in climate, as the temperatures oscillate between cold and colder. In fact, the period approximately 115,000 to 11,700 years ago, colloquially called the “Ice Age,” included incredible climate instability.

“The last 100,000 years plus has been a time of tremendous oscillation of both cold and warm in the higher latitudes, and also wet and dry in the lower latitudes,” says Rick Potts, the paleoanthropologist heading the Smithsonian Institution’s Human Origins Program. “This dynamism of the planet creates, for all organisms, a fundamental question of how [to] survive the change.” Indeed, climate conditions caused serious consequences for many plant and animal species, which struggled to adapt to the abrupt shifts in their surroundings. Hominins certainly faced the same challenge.

At the beginning of the Ice Age, we weren’t the only hominin around. The last vestiges of the long-lived Homo erectus and short-statured Homo floresiensis traversed the islands of Indonesia. The Denisovans populated Asia. And the Neanderthals tolerated the cold conditions of Europe. Though these species, our closest evolutionary kin, had thrived in the past, they all vanished from the archeological record in the midst of the Ice Age. Why?

"There's almost certainly no universal explanation,” Potts says, “but there are plenty of ideas out there.”

One persistent theory proposes that these hominin species were wiped away when a smarter hominin species — our own — appeared in their territories and overcame them through violence or the takeover of food. “The dispersal of Homo sapiens,” Potts says, “around the time of the extinction of all of these different species raises suspicions, and those suspicions are amplified when people think about the violence that people have caused one another, even in our own species in historical times. So, people are always going to suspect that our species killed off the others, but there's very little evidence to indicate that.”

Read more: Everything Worth Knowing About ... Human Origins

Today, a top theory posits that the period’s abrupt climate changes contributed to these populations’ disappearance. Recent research indicates that several sudden cold and arid stretches around 44,000 to 40,000 years ago devastated the Neanderthals, despite their abundant biological and behavioral adaptations to the cold. “The climate connection is pretty clear,” says John Shea, a paleoanthropologist at Stony Brook University. “Eventually, it gets too cold to find food, and they froze to death.” Some scholars, including Shea, speculate that the fluctuations in climate and food supply were worsened by demographics. Other studies indicate that the Neanderthals maintained such small and tenuous populations that any threats to their ability to reproduce — whether connected to the climate or another cause — became almost impossible to surmount.

The exact sizes of these hominin populations still evade specialists, and according to Shea, “estimates range by multiple orders of magnitude.” That said, paleoanthropologists increasingly look to demographics to explain these Ice Age extinctions, though they’re quick to temper their theories. “Extinctions,” Shea says, “can occur for many reasons,” and species don’t always disappear even when their populations stay small. Our own species remained relatively scattered throughout the period and persisted nonetheless, suggesting that other considerations are also at play.

Almost all hominins disappeared during the Ice Age. Only a single species survived. But H. sapiens had appeared many millennia prior to the Ice Age, approximately 200,000 years before, in the continent of Africa. In many ways, this was an auspicious location. When the Ice Age really rolled around about 200 millennia into our evolution, Potts says that this terrain remained isolated from the full force of glacial activity that other hominins experienced elsewhere.

That said, approximately 70,000 to 60,000 years ago, in the midst of the Ice Age, our species started to spread throughout the planet for a variety of potential reasons. We moved into flourishing forests and arid, dry deserts. “They didn't have a map,” Potts says. “They were just going over to the next valley and hillside to see what was there, and some of them went quite a distance.” Eventually, these travelers entered the iciest glacial environments in Europe, landscapes that the cold-adapted Neanderthals attempted to avoid.

Ultimately, our ancestors occupied an assortment of environments and endured the fickle cycles of climate change that occurred in each. Yet, the fact that they achieved this feat as other hominins faded from the archeological record is curious, considering their cultural similarities.

“Hominins share a set of ancestral survival skills,” Shea says. They spent their time in complex social communities. They also communicated amongst themselves, imagined innovative solutions to their problems, and invented and implemented specialized tools. “It’s not that we had something these extinct hominins lacked,” Shea says. “It’s that we used those skills differently.”

The clearest example of early humans' ability to survive, says Shea, “is that they were doing something different in terms of signaling and transmitting information to one another.” Though specialists have historically speculated that our own species is the only one capable of conversing, it's almost certain that the hominins were all able to communicate in one way or another. Some specialists even speculate that the hominins as early as H. erectus possessed protolinguistic abilities. Beyond that, studies suggest that the Neanderthals possessed “auditory and speech capabilities” comparable to our own.

That said, our ability to communicate seems to surpass that of our closest cousins considerably. Early H. sapiens may have had amplified vocal flexibility thanks to their anatomy, enabling their language to proliferate and convey complex information about local surroundings, including flora and fauna and changing climate conditions. “The balance of evidence is pointing in favor of Homo sapiens having more effective control over the complexity of sounds,” Potts says. “Finer control … leads to cultural diversity and behavioral diversity, and, therefore, the ability to figure different things out in different places.”

Additionally, specialists say that H. sapiens, more than any other animal, shared a sense of social identity that they communicated through symbolic activities, including rituals, personal adornment and art. This cultural camaraderie and symbolism, according to Potts, helped our kin band together and build broad social connections beyond their communities. These connections functioned as a contingency plan in times of trouble. If climate change or any other issue caused a population in one area to struggle, those people could turn to their neighbors. “If things were bad where you are,” Potts says, “you had allies elsewhere that could help you survive.”

Specialists stress that the other hominins, particularly the Neanderthals, also acquired social identities. The archeological record increasingly indicates that these individuals created simple symbolic artifacts, though they were not as adept at constructing supportive social ties. “The Neanderthals,” Potts says, “were really, really good at surviving in their local environments, but if things weren't good where they were at any given time, they didn't seem to have the kind of long-distance social alliances that allowed Homo sapiens to overcome all obstacles.”

Another skill that helped humans survive through the Ice Age might be our ability to alter our surroundings, particularly in conceiving and creating sophisticated stone tools. Once again, H. sapiens were far from the only species to fashion sharp points and flakes. That said, they made substantial innovations in toolmaking by intentionally planning and spreading their technology, a process potentially connected to communication abilities. “When you look at Homo sapiens,” Potts says, “the diversity of stone tools and the innovation of stone tools goes far beyond, as a totality, what the Neanderthals ever produced.”

Though there’s no academic consensus, toolmaking potentially played an important part in our species’ adaptability. “Our survival tool is basically our ability to modify things. You go back to the oldest stone tool,” Potts says, “and it's a modification of the environment. You pick up a stone and you modify it, and all of a sudden, you have sharp edges and you have pounding implements.” That, Potts adds, shapes the foundation of our species’ longevity. “Technology can help with solutions — solutions to where to find food, when to find food, how to solve problems of survival.”

Overall, changing climate conditions provided our species an opportunity to perfect our biggest and best skills — our communication and willingness to make our mark on the world. And when we emerged from the frost, our species only improved upon those talents. When the world thawed about 11,700 years ago, humans began banding together to cultivate crops and create settlements for the first time, forming the foundations for the first civilizations.