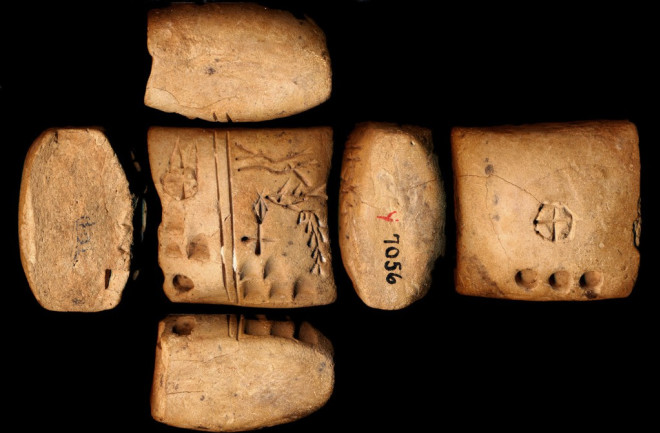 Two sides of a tag from ~3,100 BC Mesopotamia describing the transfer of 25 female and 5 male goats. The crossed circle is the symbol for goat, the circles and semicircles represent numbers and the fish symbol indicates a lord involved in the exchange. (Credit: Yale Peabody Museum of Natural History; photo by K. Wagensonner)

About 5,000 years ago, 30 goats changed hands between Sumerians. To record the transaction, a receipt was carved onto a clay tag, about the size of a Post-it. Simple geometric signs represented the livestock and purveyor. The indents of circles and semicircles denoted the quantity exchanged.

Imagine how surprised these people would be to learn their receipt is now held in a museum.

That’s because the tag is one of the earliest texts from the oldest known writing system, Mesopotamian cuneiform, developed around 3,200 BC in the area of present-day Iraq. Like most surviving records from the time, it’s economic in nature, and about as riveting as a checkbook ledger. But the interesting part is not what these early texts said. It’s how they came to be.

These early texts beg the question: How was writing invented?

That question has at least four answers because writing was independently invented at least four times in human history: in ancient Mesopotamia, Egypt, China and Mesoamerica. The scripts of these civilizations are considered pristine, or developed from scratch by societies with no exposure to other literate cultures. All other writing systems are thought to be modeled after these four, or at least after the idea of them.

With future research, the number of pristine scripts could decrease, if archaeologists find evidence that any of these cultures copied the idea of writing from one another (most likely Mesopotamia and Egypt, because geography). And the number could grow, if other ancient symbol systems are deciphered and proven to represent true writing. But as it stands, most scholars believe that just these four scripts had independent origins.

The Steps to True Writing

True writing systems use graphic symbols to represent speech unambiguously. They allow literate people to write anything they can say, and have it read just as intended.

Bones from Stone Age sites over 10,000 years old have been found with successive incisions, which some archaeologists argue were tallies, keeping track of events like successful hunts or lunar phases. (Credit: Overmann 2016 Quaternary International 405)

Bones from Stone Age sites over 10,000 years old have been found with successive incisions, which some archaeologists argue were tallies, keeping track of events like successful hunts or lunar phases. (Credit: Overmann 2016 Quaternary International 405)

Long before true writing — signs representing speech — people recorded ideas and information in other ways. For instance they drew pictures to depict events or used tallies to keep count of recurrent affairs. And today, long after the emergence of true writing, there are alternative systems like musical notation, mathematical symbols and the cartoon instructions for building IKEA furniture.

These systems convey certain concepts more efficiently or effectively than writing could. But they’re limited to particular kinds of information, and don’t transcribe speech word-for-word. We might (struggle to) build the IKEA desk the same way, but two people wouldn’t use exactly the same words to describe the steps (or expletives to mark the missteps).

The revolutionary idea to have signs that represent speech arose in distinct cultures and at different times: around 3,200 BC in Mesopotamia and Egypt,  around 1,200 BC in China and around 400 BC in Mesoamerica. Although the history of these scripts differs, they underwent broadly similar developmental stages.

The oldest surviving texts come from very specific contexts, such as economic transactions in Mesopotamia and divination rituals in China. The first characters were mainly pictographic signs, depicting exactly what they referred to. For example, in ancient Chinese script, “fish” was represented by a recognizable picture of a fish. Some signs were also borrowed from preexisting symbolic systems, such as emblems, tokens and pottery motifs, with which people were already familiar.

Over time the iconic characters became more stylized, so they were easier to write but resembled their referent object or action less. That “fish” sign got gradually less fishy, ultimately assuming its present-day form: 魚, a crossed box with a hook on top and four dashes radiating below.

How various Chinese characters developed over time to their present-day forms.

How various Chinese characters developed over time to their present-day forms.

In another pivotal step, some characters came to signify sounds, rather than distinct, complete words (though the degree and pace by which phonetic symbols replaced whole-word signs differs between the scripts). This transition was aided by the rebus principle: swapping a word that’s difficult to depict graphically for its homonym, such as using the picture of an “eye” to represent “I”. To help differentiate characters with multiple meanings, the systems also added semantic markers that denoted parts of speech and context clues.

Through centuries of innovation, the scripts eventually advanced to the point of transcribing speech. This propelled writing infinitely beyond its original functions, into a tool capable of recording history, literature and messages — all the content filling our libraries, notes and text files today.

Adopted and modified by neighboring cultures, these scripts persisted for over a millennium. While the systems of Mesopotamia, Egypt and Mesoamerica eventually died out, the Chinese system has remained in continuous use for more than 3,000 years.

That’s the general story of writing, as told by the pristine scripts. Next, we’ll review how their origins differ and what archaeologists have gleaned from the earliest texts.