How Global Warming Caused the Attack of the Giant Ants 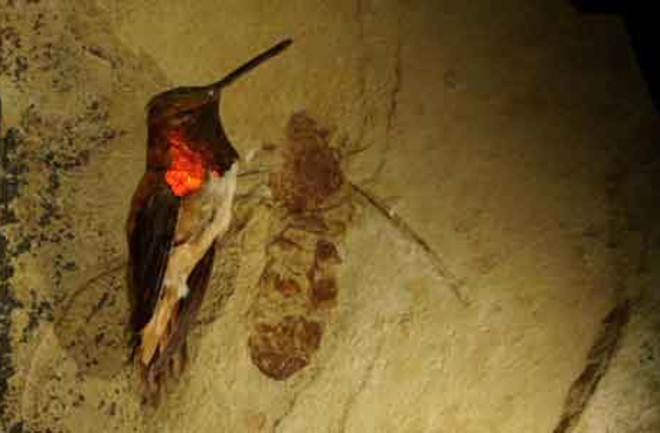 It sounds like the opening plot to a made-for-TV horror flick: Global warming renders an Arctic land bridge habitable, spurring a race of "monstrously big ants" to blaze a trail between Europe and America. This particular horror story actually played out 50 million years ago, and the monstrously big ants were only about 2 inches long, about the size of the smallest known hummingbird. Archeologists recently unearthed the fossilized remains of this new giant ant species---one of the largest ant species ever seen---in Wyoming, making it the first complete giant ant fossil found in America. And because similar giant ants have been found in Europe, they think this is the first reported example of a tropical insect traipsing across the Arctic. It all started when paleoentomologist Bruce Archibald spied a fossil that was sitting in a drawer at the Denver Museum of Nature and Science. "I immediately recognized it and said, 'Oh my god, this is a giant ant and it looks like it's related to giant ants that are known from about this time in Germany,'" as he told Live Science. The fossil they found was a queen ant, so we still don't know how large the average worker was. Because of its whopping 2-inch length, he included the word "titan" into the new species, dubbing it Titanomyrma lubei. The only other ant that rivals the size of T. lubei is an equatorial African queen ant called Dorylus wilverthi. Because this modern giant ant and other ants longer than an inch living in South American and Australia like tropical settings, the researchers think T. lubei was also thermophilic (i.e., sets up shop in warm places). Also, the T. lubei fossil was found alongside fossilized tropical plants known to thrive at 70 degrees Fahrenheit. So how did a giant ant make its way from Europe to America (or vice versa)? Archeologists already knew that mammals and other animals made their way across the Atlantic via a land bridge in the Eocene, which spans 56 million to 34 million years ago. As Archibald says, during this time, "you could have walked from Vancouver to London across dry land" because the sea floor was shallower and the two continents were closer. But unlike these other Arctic-crossing animals, even the temperate climate of the Eocene would have been too cold for these giant ants. T. lubei would have needed warmth in order to cross the Arctic bridge, so Archibald and his team think that the giant ants made their break for it when the Eocene experienced one of its hyperthermals, hundred-thousand-year periods of higher temperatures thought to be "driven by the release of carbon dioxide from sediment." It's estimated that these warm periods would have raised Arctic temperatures to 46 degrees Fahrenheit. Next up, the scientists want to learn more about the insect's origins by more fully comparing this new fossil with the European ones. And who knows, learning about a past invasion of giant ants could provide valuable knowledge if our existing giant ants ever get the chance to cross a land bridge again. (Now, of course, this seems to be one example where global warming seems to be our friend: higher temperatures means melting ice caps means higher sea levels, keeping giant ants at bay---unless they know how to assemble into rafts and float.) Related Content: Not Exactly Rocket Science: Fire ants assemble into living waterproof rafts Not Exactly Rocket Science: Giant, fruit-eating monitor lizard discovered in the Philippines DISCOVER: Plant Migration Tied to Climate Change 80beats: Will All Animals Shrink Under a Warmer Climate?Image: Bruce Archibald