How Ancient 'Deer' Lost Their Legs and Became Whales

Over millions of years, they traded in their legs for flippers, gained blow holes and evolved into the largest creatures on Earth. 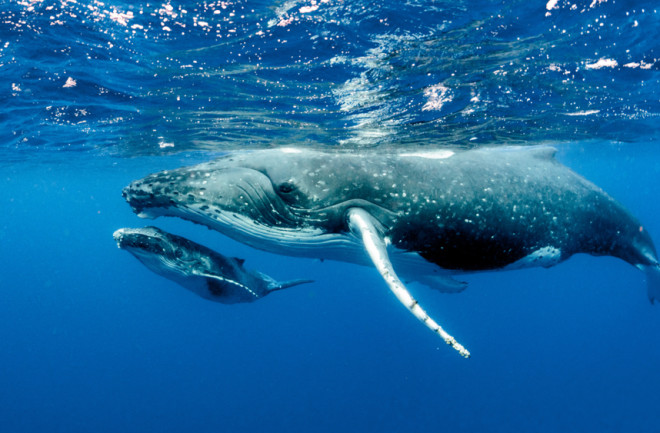 The largest animals that have ever existed on our planet descended from a miniature deer-like creature that walked on four legs in the swamps of ancient India.

Cetaceans include everything from dolphins to whales. They are fairly unique among mammals in that they live permanently in the sea — something they share with only a few other types of live-bearing, warm-blooded species.

But their evolutionary ancestors weren’t always the seafaring types. In fact, just 50 million years ago, ancestors of all cetaceans were small creatures called Indohyus that waded through swamps on four legs.

“Indohyus basically looked like a tiny little deer, a deer the size of a cat,” says Hans Thewissen, a professor at Northeast Ohio Medical University who has studied whale evolution for years and wrote the book The Walking Whales: From Land to Water in Eight Million Years.

How did these creatures go from that to blue whales the length of about two city buses? It took a lot of small changes over tens of millions of years.

The Land of Indohyus

Indohyus belonged to the even-toed group of ungulates, which today includes giraffes, horses, pigs and cetaceans. Research shows that back in the Eocene epoch roughly 50 million years ago, Indohyus lived in modern-day India and Pakistan. Today, a distant deer-like relative called the water chevrotain (or African mouse-deer) can be found from central to southern Africa. These deer eat flowers and fruits and live near rivers, which they use as escape routes to flee land-based predators or even eagles.

Thewissen’s research examining stable isotopes in Indohyus fossils shows they ate land plants, but their dense bones suggest they spent a lot of time in the water. The hippopotamus — the closest living relative of whales that live outside the ocean — also has dense bones, which help weigh it down while walking along the bottom of lakes or rivers.

A Taste for Meat

The evolutionary descendant of Indohyus, called Pakicetus, began to adopt a more aquatic lifestyle as they abandoned a vegetarian diet, based on the way their teeth look, Thewissen says. These creatures looked a little like wolves with elongated bodies, and also lived in the India-Pakistan region. Remaining fossils of these extinct animals have only been found in rocks, which tells us that they likely spent a lot of time in shallow pools of water.

“We think they sat in the water and waited for prey to drink, similar to crocodiles,” Thewissen says.

These animals were succeeded by ambulocetids, at which point the creatures’ snouts becomes more elongated like crocodiles. All four limbs also shortened in these creatures. “They were much better swimmers,” Thewissen says. “[Their fossils] are found in rocks indicative of coastal environment.”

By the time remingtonocetids appeared between 49 million and 42 million years ago, the animal family began to diversify. Thewissen describes some of these animals with bodies like giant otters while others had long, thin snouts a little like gharials today, which they likely used to snap fish out of the water.

“This is a phase of experimentation where different species are trying different ways of living and modifying their bodies to match,” Thewissen says.

Some of their fossil fragments are found outside of the India-Pakistan region, which shows remingtonocetids may have been able to swim long distances, Thewissen adds.

The first ancestors of whales that began to take to the ocean more widely were the protocetids from 48 million to 42 million years ago, based partly on the fact that these fossils are found across the world from Pakistan to the eastern U.S. and Peru. Thewissen describes them as looking a little more like sea lions, with limbs big enough to support them on land, though he notes that researchers still don’t know the full range of body shapes that occurred with these prehistoric animals.

In any case, the general shapes change a lot in the next stage, that of the basilosaurids, so called in part because the first paleontologists to find some of the creatures believed they were some sort of sea snake. In reality, Thewissen says these are the first creatures “we would actually recognize as whales.”

There were two major shapes of basilosaurids. The giant sea snake-looking ones, such as the Basilosaurus isis, were about as long as a bus and still had tiny hind legs and front forearms that gave way to flippers. The other group, the dorudontines, appeared a little like dolphins, with flippers and no neck but tiny hind legs. They also had a fluke appearing at the end of their tails, characteristic of today’s cetaceans. It’s possible that the flukes started earlier, with some protocetids.

“They shortened their thumb and elongated their other fingers through time,” says Rachel Racicot, a researcher who studies cetacean evolution at the Senckenberg Research Institute and Natural History Museum in Frankfurt, Germany.

Though blow hole development likely started with the protocetids, it really became apparent in the basilosaurids. They began to form streamlined heads with noses more useful for coming up for air. “They start to have their nose closer to the back of their heads to make it easier to breathe,” Racicot says.

These creatures went extinct between 42 million and 34 million years ago — roughly the time the ancestors of modern cetaceans began to appear. The descendants of basilosaurids lost their hind legs completely and split into the two groups of whales we know today: baleen whales and toothed whales.

The major difference between baleen and toothed whales is their feeding strategy. The toothed whales hunt down prey and eat it, often using echolocation. Baleen whales are still carnivorous, but they specialize in grazing on tiny creatures like krill in vast numbers, filtering them through their grill-like baleen as they swim.

As these two groups began to emerge from their basilosaurid ancestors, they also started to develop another key component that sets cetaceans apart from many mammals — their smarts. “We see a real jump in brain size happening in the Eocene,” Thewissen says.

While modern research on whale intelligence is expanding, it has also revealed that many mysteries remain concerning these giants of the deep.